EN 16034 refers to a set of European standards which specify the technical performance characteristics for fire resisting and/or smoke control products, or better known in common language as fire/smoke doors or fire/smoke proof doors. Compliance with this standard requires to fulfill the requirements of the Construction Product Regulation [1] for construction products (short CPR), which are placed on the EU market with the intention to become permanent parts of a construction.

With the publication of EN 16034 conflicting national standards shall be withdrawn within a transitional period of 3 years (co-existence period).[2] Product manufacturers can sell their products throughout Europe by complying with a single common specification recognised and accepted by all Member States, rather than having to test and comply with different national standards in each of them.[3]

Products which are covered by EN 16034 have to be CE marked when placed on the market. CE marking enables free trade within all Member States. This is a major change as the affixing of the CE marking under the provisions of the old Construction Products Directive (CPD) which has been replaced by the Construction Products Regulation (CPR) was wrongly considered to be voluntary.

As of October 10th 2018 prEN 14351-2 has been approved. The CEN (European Committee for Standardization) website lists the following dates regarding its publication:

where DAV refers to the date when the definitive text in the official language versions of an approved norm is distributed by the Central Secretariat, DAO refers to the latest date by which the existence of a European norm has to be announced at the national level, DOP refers to the latest date by which a European norm has to be implemented at national level by publication and DOW refers to the date by which national standards conflicting with a European norm have to be withdrawn. Especially the two dates DOP and DOW are interesting. The first (DOP) will indicate when this new norm will in effect start its validity (by what date one can CE mark doors for internal use on a voluntary basis) and the end of the coexistence period (by what date the new standard must be used and old products based on the prior national norms can no longer be put onto the market). The second date (DOW) gives a good indication of how long this coexistence period will be (even though it is just an indication and only the publication DOP will indicate the definitive date.) In between the two dates both norms (the national one and the new European one) will coexist and both will need to be accepted by national authorities.

Most fire rated doors are used as internal doors (around 90% of the European market in terms of quantity). Given that EN 16034 can only be used in conjunction with other standards (internal, external, power operated pedestrian doors, industrial doors)[4] and given that the standard for internal doors is a work in progress (prEN 14351-2) [5] the applicability date of 1 November 2019 will not change anything for the sector. Most fire rated doors currently still cannot be CE marked.

In 1994 the European Commission has invited the European Standardization bodies CEN and CENELEC to draw up a common European standard for fire and smoke proof doors.[6] In 2015 the final version has been published under the standard code EN 16034 on the Official Journal of the European Union. 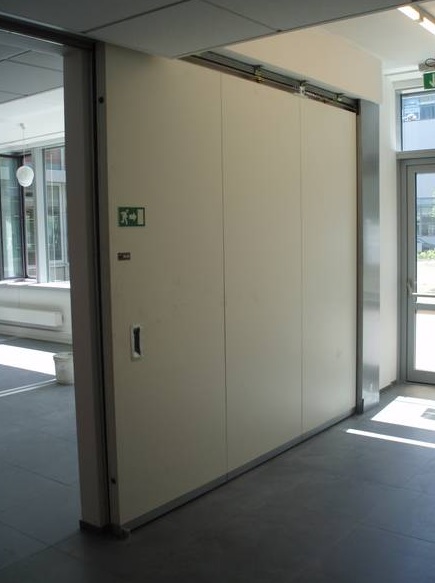 This European Standard identifies safety and performance requirements applicable to all fire resisting and/or smoke control products intended to be used in fire and/or smoke compartmentation and/or escape routes, which are either:

This European Standard does not cover:

EN 16034 covers several essential characteristics related to the intended use of the construction product which are in particular:

All characteristics covered by this standard shall be determined with tests performed by an independent third party (Notified Test Body) under the responsibility of a Notified Product Certification Body responsible for the interpretation and classification of the obtained test results.[7]

Before the resistance to fire and/or smoke control the sample shall undergo a pre-test conditioning which is performed with:

After which, the various characteristics are evaluated:

Doors, gates and windows covered by EN 16034 are subject to system 1 of the Assessment and Verification of Constancy of Performance (short AVCP) which means that the manufacturer in addition to the mentioned test and classification process is also under the surveillance of a Notified Surveillance Body responsible for the continuous surveillance and assessment of the Factory Production Control (short FPC).

The manufacturer shall decide the use of his product (scope). On this basis the Notified Product Certification Body (NPC) will set a testing program (optionally grouping different types of products into families of products) which must be absolved successfully at a Notified Testing Laboratory resulting in a test report for each performed test. The Notified Testing Laboratory can but must not be identical to the NPC.

The achieved results are then interpreted and classified by the NPC and eventually extended by the use of the "direct" and "extended field of application" in order to allow for different dimensions, use of different hardware, etc.

After the successful testing and assessment of the product the Notified Product Certification Body inspects the manufacturing plant (Initial inspection) and assesses the Factory Production Control system (i.e. ISO or similar). If successful, the NPC may issue a "Certificate of Constancy of Performance" which forms the basis of the "Declaration of Performance" (short DoP) allowing the manufacturer to CE mark his products.

The manufacturer is furthermore responsible for testing further samples taken directly from the manufacturing plant to keep and maintain his "Certificate of Constancy of Performance" valid and to be able to continue to CE mark his products.

Classification report according to EN 13501-2

This report classifies the products based on the tests carried out, describes in details the components used and defines the boundaries of the product system with the "Field of Direct Application". The field of direct application lists the possible substitutions of components and deviations from the tested models. The field of direct application is very limited and allows modifications only to a strict extend.

The EXAP report according to EN 15269-series defines the permitted extended variations of tested products (i.e. extension of dimensions, interchangeability of materials, door hardware, constructive details, …) from the tested specimens. The detailed rules for each appropriate material selection are defined in the relevant part of EN 15269-series. Currently the following EXAPs are available or in preparation:

To allow a "reuse" of the tested products the initial manufacturer can collaborate under a contract with "system providers" (or system houses) and delegate/outsource/franchise the production to them. Given that fire and smoke products are covered by AVCP system 1, the system provider has to undergo the Factory Production Control (FPC) and the Continuous surveillance by an Notified Surveillance Body himself. Practically the system provider can avoid to do the initial type testing reusing the classification reports and extended application reports from the original manufacturer. 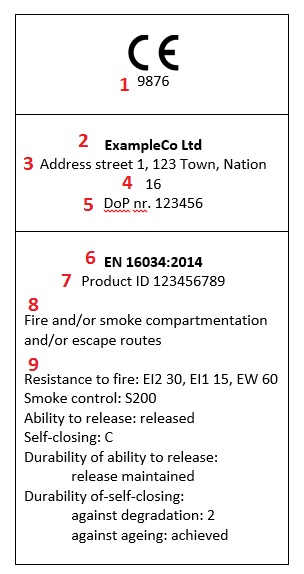 EN 16034 requires the distribution of a Declaration of Performance (DoP), to which every customer or user shall have access.

The DoP lists all essential characteristic of the product as required by EN 16034. The manufacturer shall at least declare one characteristic with a result. Other characteristics can be declared as NPD (“no performance determined).

DoPs are to be provided either in paper form or by electronic means in the language/s of the member state with every product delivered. The declaration of performance for products with fire resisting and/or smoke control characteristics shall contain at least the following details:

Difference to other certification systems

Large differences exist in opening directions to be tested (EN requires both sides to be tested, UL one side only), permitted wall types (EN lists 3 types of walls, whereas UL does not differ at all), surface temperatures permitted (UL measures the first 30 minutes only, whereas EN the full duration of the test) and sustained flaming allowances (EN no flaming, UL several types and durations allowed). Another major difference is the treatment of the exchangeability of components such as locks, hinges, and frame types. The EN standard basically requires each combination to be tested as a whole, where as UL is satisfied with the single component being tested independently from the door assembly. Further the EN standard differs in its treatment of the extension of dimensions from the UL standard. EN allows for only limited dimensional extensions, but requires in such cases a surplus of test time and better gap values. Whereas the UL Standard does not allow an increase of the dimension of the tested door, you can decrease the dimension without any restriction. Last but not least, UL requires at the end of the fire exposure a hose stream test, where water from a hose is directed to the tested assembly. No water shall penetrate and the door shall withstand the impact. The EN standard does not mention anything similar.

The permitted percentile error quote in the curve's average furnace temperature is more stringent according to the UL Standard until the 20th minute, after that the EN standard is more severe.

Difference in the neutral pressure requirement

The neutral pressure requirements for furnaces according EN 1363-1 are stricter than the pressure criteria requirements of UL 10C. According to the EN standard, the furnace is operated so that the neutral pressure plane (a pressure of zero) is established at 500 mm (less than 20 inches) above notional floor level. Irrespective of this, the pressure at the top of the test specimen shall at no time exceed 20 Pa. (See EN 1363-1 par. 5.2.2.1)

Difference in opening directions to be tested

Given that these different wall types are of different rigidities and perform differently in fire conditions, the EN standard requires that the certificate of fired doors indicates for what wall type it has been tested. The UL Standard does not specify any such supporting construction types.

The EN standard requests the integrity criteria of the door to be expressed in completed minutes for which the test specimen continues to maintain its separating function during the test without developing temperatures above the initial average tempera¬ture on its unexposed sur¬face which either:

The EN 1363-1 standard requires that the specimen continues to maintain its separating function during the test without either:

The UL 10B Standard expresses the following concerning the flaming:

Whereas the UL 10C Standard states:

UL allows an individual composition of the door set from various components such as hinges, locks, frames, door leaves etc. as long as every single component has satisfied the UL standard and been tested individually as such. This is not true for the EN standard. Even though for each component there is a separate test standard available, which the single hardware component must satisfy, the EN standard allows only for the tested composition of components. Therefore exchanging hinges, locks, steel sheet thicknesses, etc. is generally not possible without additional tests.

Contrary to the EN Standard, the UL Standards 10B and 10C requires a Hose Stream Test, which measures integrity of specimens after exposure to fire. This includes that immediately within 3 minutes (according to UL 10B, the UL 10C stipulate ​1 1⁄2 minutes) after the termination of the fire resistance test, the tested door is to start to be subjected to the impact, erosion, and cooling effects of a hose stream directed ?rst at the bottom center of the assembly and then at all parts of the exposed surface (according to a Hose steam pattern which is specified in the UL standards UL 10B and UL 10C). This can cause penetration of the assembly, breakage and dislodgement of hardware or glazing. (See: UL 10C par. 12.1 and par. 10.1)