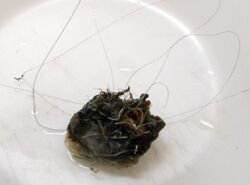 A Guglielmi detachable coil (GDC) is a medical device made of platinum used in the treatment of brain aneurysms. It led to a revolutionary advance in the field of endovascular minimally-invasive surgery for the occlusion of cerebral vascular disease.

Invented by Dr. Guido Guglielmi, Italian neurosurgeon and professor of UCLA interventional neuroradiology in 1989, and gradually introduced in the later 1990's as an alternative to invasive surgical clipping. In September 1995, the Guglielmi Detachable Coil (GDC) system received formal approval from the U.S. Food and Drug Administration (FDA) for treatment of surgically high-risk intracranial aneurysms. Due to advances and patent rights, not all coils used today are GDC's, however they are modeled on the same mechanism.

These coils have special physical and electrolytic properties: the material is a high shape-memory alloy, allowing it to easily bend and regain its original coil shape. These platinum coils are fairly soft and adaptable to the shape of an aneurysm.[1] Unsatisfactory placement can be adjusted to avoid parent artery occlusion. GDC coils are highly sensitive to low direct currents, which allow them to separate from the delivery wire, thus the name "detachable coil".

Endovascular coiling has become the dominant technique for aneurysm occlusion because it is minimally invasive and can reach areas of the brain vasculature which craniotomies can not. Endovascular coiling is preferred for aneurysms located in the posterior circulation. It is advantageous in treating early ruptured cerebral aneurysms for patients in critical condition. The short and medium term efficacy of GDC coils in the treatment of cerebral aneurysms has been promising. While the long term efficacy of GDC coils is still being studied.