From HandWiki
Jump to: navigation, search
For the 2013 Indian film, see Ente (film).

The Ente (German: duck) was the world’s first rocket-powered full-size aircraft. It was designed by Alexander Lippisch as a sailplane and first flown under power on June 11, 1928, piloted by Fritz Stamer.[1]

During the late 1920s, Fritz von Opel had undertaken a variety of publicity stunts involving rocket-powered vehicles for the Opel company. He was assisted in these endeavours by pyrotechnics manufacturer Friedrich Sander and rocketry advocate Max Valier. In March 1928, the three men visited the Wasserkuppe, a mountain that had become the focus of German gliding, to investigate the possibility of fitting rockets to an aircraft. There, they encountered some of Lippisch's revolutionary gliders, which because of their tail-less designs suggested themselves to rocket propulsion. Lippisch was able to demonstrate how models of his aircraft would fly with small rockets installed in them. In June, von Opel, Sander, and Valier returned and bought one of his aircraft, the Ente, a canard design.

Two black powder rockets were installed, to be electrically fired from a switch in the cockpit. A counterweight system was also devised and placed under the cockpit floor that would automatically adjust the aircraft’s center of gravity as the fuel of the rockets was burned up. The rockets were intended to be fired one after the other, to provide continuous thrust for as long as possible and each had a burn time of around 30 seconds. Fritz Stamer, who had long been a test pilot for Lippisch's designs was selected to fly the aircraft. After one false start, the aircraft took off and flew a 1,500 metre (4,900 ft) circuit of the Wasserkuppe's landing strip.

On the second flight, the team decided to try firing both rockets together for increased thrust over a shorter period. Something went wrong, however, and rather than burning properly, one of the rockets exploded, punching holes in both wings and setting the aircraft alight. Stamer was nevertheless able to bring it down from a height of around 20 metres (65 ft) before hastily abandoning the Ente, which was burned beyond any hope of salvage. 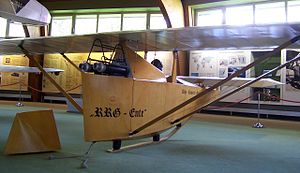