The Orlan space suit (Russian: Орлан meaning sea eagle) is a series of semi-rigid one-piece space suit models designed and built by NPP Zvezda. They have been used for spacewalks (EVAs) in the Russian space program, the successor to the Soviet space program, and by space programs of other countries, including NASA. [1][2][3]

The first spacewalk using an Orlan suit took place on December 20, 1977, on the Soviet space station Salyut 6, during the Soyuz 26 mission. Yuri Romanenko and Georgi Grechko tested the Orlan-D space suit. The Orlan-DM was used for the first time on August 2, 1985, by the cosmonauts Vladimir Dzhanibekov and Viktor Savinykh of Salyut 7.

The Orlan space suits were used for spacewalks on the Salyut stations, but for Mir they were replaced by the Orlan-DMA and Orlan-M suits: The Orlan-DMA was used for the first time in November 1988, by the cosmonaut Musa Manarov from the Mir space station. The Orlan-M continued in use on Mir from 1997 until the end of the station's operational life and is now used on the International Space Station. Orlan space suits have been used by Russian, American, European, Canadian and Chinese astronauts.

On February 3, 2006, a retired Orlan fitted with a radio transmitter, dubbed SuitSat-1, was launched into orbit from the International Space Station.[4][5][6]

In April 2004, China imported 12 Orlan spacesuits from Russia: Three for EVA, two for airlock training, four for neutral buoyancy tank training, four for testing the EVA support system on the Shenzhou spacecraft. [7] Various components on the EVA suits and airlock training suits, including electrical and communication equipments, were designed and manufactured by China. In Chinese, Orlan spacesuits are refereed by the literal translation of Орлан, Haiying. (Chinese: 海鹰; pinyin: Hǎiyīng; literally: 'sea eagle') On 27 September 2008, Liu Boming wore one of the Orlan suits in order to assist Zhai Zhigang during the space walk portion of Shenzhou 7 mission.[8]

In June 2009, the latest computerized Orlan-MK version was tested during a five-hour spacewalk to install new equipment on the International Space Station.[9] The new suit's main improvement is the replacement of the radio-telemetry equipment in the Portable Life Support System backpack which contains a mini-computer. This computer processes data from the spacesuit's various systems and provides a malfunction warning. It then outlines a contingency plan which is displayed on an LCD screen on the right chest part of the spacesuit.[9] 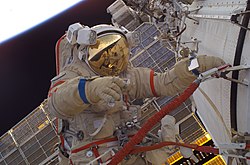 The Orlan space suit has gone through several models. Space-rated designations include the Orlan-D, Orlan-DM, Orlan-DMA, and Orlan-M models; the Orlan-GN, Orlan-T, and Orlan-V are used in training and are used underwater.[10][11] The latest model, called Orlan-MK, was tested during a spacewalk in June, 2009.[9] The original Orlan suit, with a two and a half hour operation time, was designed as an orbital suit for use on the Soviet Lunar programme, although it was abandoned in favour of a model with a greater operating capacity. The Orlan-D expanded the operation time to three hours; the Orlan-M to nine hours.

The Orlan space suit is semi-rigid, with a solid torso and flexible arms.[12] It includes a rear hatch entry through the backpack that allows it to be donned relatively quickly (approximately five minutes). The first Orlan suits were attached to the spacecraft by an umbilical tether that supplied power and communications links. The Orlan-DM and later models are self-sustaining. 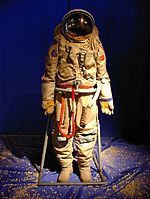 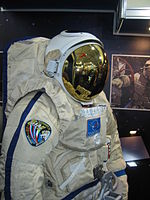 Orlan suits are used in the Yuri Gagarin Cosmonauts Training Center in Star City, Moscow: the Orlan-GN for water immersion training, the Orlan-T for airlock procedure training, and the Orlan-V for low gravity flight training.