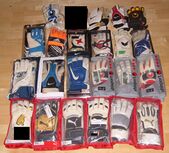 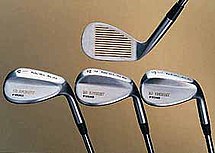 Some sports equipment, from left to right, up to down: field hockey stick and ball, American football helmet and ball, association football goalkeeper gloves and golf clubs

The ball is often what a sport requires and revolves around. A sports ball is typically round, but can also be in the shape such as association football, American football, baseball and basketball, or the ball is named after the sport. Other cases are the Gaelic football. In other cases, the name of the sport is indicated, just as the cricket ball, golf ball, lacrosse ball or tennis ball.

Flying discs are used for various games such as freestyle, disc golf and ultimate.

In many games, goal posts are at each end of the playing field, there are two vertical posts (or uprights) supporting a horizontal crossbar. In some games, such as football, hockey or water polo, the object is to pass the ball or puck between the posts below the crossbar, while in others, such as those based on rugby, the ball must pass over the crossbar instead.

Nets are used for tennis, volleyball, football, basketball, hockey and badminton. A different type of net is used for various forms of fishing.

Racquets are used for racquet sports such as tennis, squash and badminton, and are used to hit a ball between opposing players or teams.

Fishing rods and fishing tackle are primarily used for fishing and sport fishing. 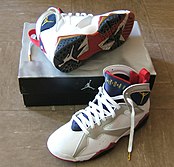 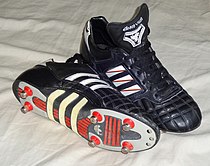 Examples for training equipment include swiss balls, weights, chin-up bars, equipment for the gym. Also protective equipment such as weight lifting belts and bench shirts for weight training and powerlifting.[2]

Special sports equipment, is the equipment usually worn by the athletes according to their needs or desires.

Vehicles (sometimes specialized) are used as equipment for some sports, including motor sport, cycling, aeronautics, sailing and hot air ballooning.

Small vehicles with flatbeds are often used to carry injured athletes off the field, most commonly in American football.

History and development of sports

Historically many sports players have developed their own sporting equipment over time. For instance, the use of a football dates back to ancient China, between 225 BC and 220 AD. As football remains the most popular sport in the 21st century, the material of the ball has completely changed over the centuries; from being made out of animal skin, to being lined with multiple layers of polyester or cotton.

As the sporting equipment industry improves, so does the athletes performance. This is due to the fact that the equipment is more efficient, lighter and stronger it forming a bio-mechanical system, interacting with the athlete.[3]

Since the massive adoption of wearable, new sport equipment tend to be electronics and connected to deliver data performances.