The Sup 'R' Mod II was an RF modulator sold by M&R Enterprises in the late 1970s and early 1980s. It allowed the connection of computers and other devices with composite video outputs to a television.[1]

Apple Inc. wanted to provide users of their Apple II computers with a way to view color output on a television, but they had trouble getting FCC approval, because the RF modulation solution they were using was too noisy. Apple made an arrangement with a small nearby company, called M&R Enterprises, to manufacture and sell the devices. While Apple could not sell the modulator and computer as a package, retail computer dealers could sell both devices to the end user.[2]

Marty Spergel, who ran M&R Enterprises, was told by Steve Jobs that it might sell as many as 50 units a month. Spergel later estimated that he had sold about 400,000 units.[3] 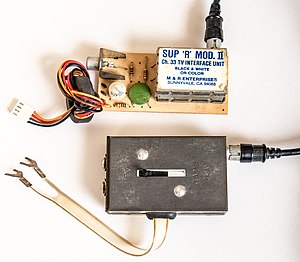 The Sup 'R' Mod II kit came with a small printed circuit board, an antenna switch, and a coaxial cable with a ferrite core and RCA connectors. Composite video was received by the circuit board through a short cable terminating in a molex connector, which plugged into a header on the Apple II motherboard. Input could also be provided through an RCA connector. The output of the RF modulator went out through a coaxial cable to the antenna switch.[5][6]

The board and antenna switch came with a bit of double-sided tape to allow the user to attach them to the inside of the computer case and the side of the television, respectively.

The modulator presented a color signal on UHF channel 33.[4]