The big push model is a concept in development economics or welfare economics that emphasizes that a firm's decision whether to industrialize or not depends on its expectation of what other firms will do. It assumes economies of scale and oligopolistic market structure and explains when industrialization would happen.

The originator of this theory was Paul Rosenstein-Rodan in 1943. Further contributions were made later on by Murphy, Shleifer and Robert W. Vishny in 1989. Analysis of this economic model ordinarily involves using game theory.

The theory of the model emphasizes that underdeveloped countries require large amounts of investments to embark on the path of economic development from their present state of backwardness. This theory proposes that a 'bit by bit' investment programme will not impact the process of growth as much as is required for developing countries. In fact, injections of small quantities of investments will merely lead to a wastage of resources. Paul Rosenstein-Rodan approvingly quotes a Massachusetts Institute of Technology study in this regard, "There is a minimum level of resources that must be devoted to... a development programme if it is to have any chance of success. Launching a country into self-sustaining growth is a little like getting an airplane off the ground. There is a critical ground speed which must be passed before the craft can become airborne...."[1]

Rosenstein-Rodan argued that the entire industry which is intended to be created should be treated and planned as a massive entity (a firm or trust). He supports this argument by stating that the social marginal product of an investment is always different from its private marginal product, so when a group of industries are planned together according to their social marginal products, the rate of growth of the economy is greater than it would have otherwise been.[2]

Indivisibilities in the production function may be with respect to any of the following:

Indivisibility (or complementarity) of demand[edit]

Developing countries are characterized by low per-capita income and purchasing power. Markets in these countries are therefore small. In a closed economy, modernization and increased efficiency in a single industry has no impact on the economy as a whole since the output of that industry will fail to find a market. A large number of industries need to be set up simultaneously so that people employed in one industry consume the output of other industries and thus create complementary demand.

To illustrate this, Rosenstein Rodan gives the example of a shoe industry. If a country makes large investments in the shoe industry, all the disguisedly employed labor from the other industries find work and a source of income, leading to a rise in production of shoes and their own incomes. This increased income will not be expended only on buying shoes. It is conceivable that the increased incomes will lead to increased spending on other products too. However, there is no corresponding supply of these products to satisfy this increased demand for the other goods. Following the basic market forces of demand and supply, the prices of these commodities will rise. To avoid such a situation, investment must be spread out amongst different industries.

The situation may be different in an open economy as the output of the new industry may replace former imports or possibly find its market by way of exports. But even if the world market acts as a substitute for domestic demand, a big push is still needed (though its required size may now be reduced due to the presence of international trade).

Indivisibility in the supply of savings[edit]

High levels of investment require a corresponding high level of savings. We cannot always rely on foreign aid as the huge levels of investments in the different sectors need to be made not only once, but multiple times. Hence domestic savings are a must. But in an underdeveloped economy,this is a challenge due to the low income levels. The marginal rate of savings needs to be increased following the rise in incomes due to higher investment.

How the big push works[edit]

Consider a country whose economy is characterized by a large number sectors which are so small that any increase in the productivity of one sector has no impact on the economy as a whole. Each sector can either rely on traditional methods or switch to modern methods of production which would increase its efficiency. Let us assume that there are [math]l[/math] workers in the economy and [math]n[/math] sectors. Each sector therefore has [math]{l}/{n}[/math] workers.

Using traditional technology, a sector would produce [math]{l}/{n}[/math] amount of output, with each worker producing one unit of the commodity.

Using modern technology a sector would produce more as the productivity would be greater than one unit per worker. However, a modern sector would require some of the workers (say [math]h[/math]) to perform administrative tasks. 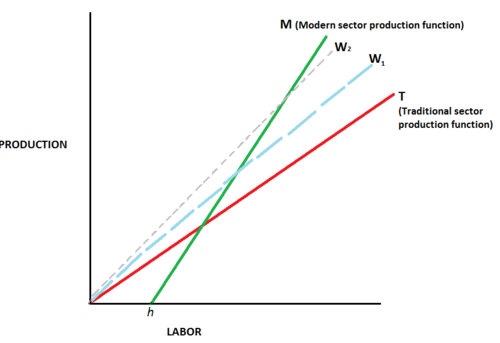 Assume that the traditional sector pays workers one unit of output which is subsequently spent equally by them in all sectors. The modern sector pays higher wages to workers. If all the workers are employed by the traditional sector, then the demand generated for the output of each sector is [math]D_1={1}/{n}[/math]. Government intervention in a manner that investment is carried out on those industries that have higher forward and backward linkages. We have two possible cases:

This implies that costs (given by [math]w_1l^*[/math]) are lower than the earnings (given by [math]D_1[/math]). So the firm makes a profit and will choose to modernize (even if other firms do not).

However, if all the other firms have modernized, the firm faces a higher demand [math]D_2[/math], arising out of higher income levels of workers of these modernized firms. The firm will hence choose to modernize as well so that it makes profits:

The concept of externalities is relevant for the Industrialization of underdeveloped countries, where decisions are to be made regarding distribution of savings among alternative investment opportunities. These arise from the interdependence in market economies.[3]

Pecuniary economies are external economies transmitted through the price system, as prices are the signalling device (under conditions of perfect competition in a market economy). They arise in an industry (say industry X) due to internal economies of overcoming technical indivisibilities. This reduces the price of its product, which will benefit another industry (say industry Y) which use this output as an input or a factor of production.[4] Subsequently, the profits of industry Y will rise, leading to its expansion and generating demand for the output of industry X. As a result, industry X's production and profits also expand.[5]

However in underdeveloped countries, conditions of perfect competition are not present due to the decentralized and differentiated nature of the market. Prices fail to act as a signalling system in the following ways:[3]

This justifies the need for centralized pan-industry planning of investment in Developing countries, as the private sector cannot undertake such planning.

Enlargement of the market size is another important externality which arises from the complementarity of industries. There exists an incentive to expand the scale of operations because the employees of one industry become the customers of another industry. In terms of products too (as in the above example of industries X and Y), one industry generates demand for the output of the other when the scale of operations increase.[6]

Marshallian economies also accrue to a firm within a growing industry, resulting from agglomeration of industrial districts or clusters in a particular area. These occur due to the following advantages of agglomeration identified by Alfred Marshall:

Availability of skilled labour is an externality which arises when industrialization occurs, as workers acquire better training and skills. This is not achievable by mere establishment of a few industries, but requires a large program of industrial growth. It is one of the most important external economies because absence of skilled labor is a strong impediment to industrialization.[7]

The large-scale programme of industrialization advocated by this model requires huge investments which are beyond the means of the private sector. The investment in infrastructure and basic industries (like power, transport and communications) is 'lumpy' and has long gestation periods. The role of the state in this theory is therefore critical for investment in social overhead capital. Even if the private sector had the requisite resources to invest in such a programme, it would not do so since it is driven by profit motives.[7] Many investments are profitable in terms of social marginal net product but not in terms of private marginal net product. Due to this there is no incentive for individual entrepreneurs to invest and take advantage of external economies.[1]

The theory has been criticized by Hla Myint and Celso Furtado, among others, primarily on the grounds of the massive effort required to be taken by underdeveloped countries to move along the path of industrialization. Some of the major criticisms are as follows.