The affluent Gangnam District in Seoul, located just across a motorway from the village above

Economic inequality in South Korea is a major issue. According to data during the 2010s, low-income earners[lower-alpha 1] make up to 40% of South Korea's entire labour force.[1] Conversely, the highest income earners[lower-alpha 2] make up only 1–1.3% of the labour force. In general, 98.7% of South Koreans make less than Template:KRWConvert annually.[1] According to 2015 data, 63% of workers make less than Template:KRWConvert annually.[2]

Many South Koreans especially those of the younger generation feel that they are not benefiting during periods of economic growth, and have criticized the increasingly difficult socioeconomic situation and class stratification in the country, dubbing it as "Hell Joseon" (Korean: 헬조선).[3] They have also described themselves as being a part of the Sampo generation, whereby they have given up on courtship, marriage, and having kids due to the high costs of living and unemployment, and consequently the N-po generation.[4][5]

Moreover, much of the country's economic inequality can be attributed to the dominance of chaebols (Korean: 재벌; lit. "rich family"), which has also been seen by many South Koreans as highly corrupt and influential in the political system. Its dominance is also likely to last and engenders the risk of slowing down the transformation of the South Korean economy for the benefit of future generations.[6][7]

The poverty rates of economies within the OECD, South Korea ranks one of the highest at 17.4% and increasing, just close behind the United States at 17.8%. 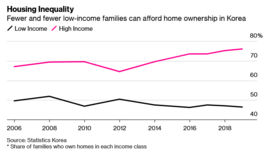 The widening gap of housing inequality in the country, with home ownership becoming increasingly difficult for most South Koreans

Among other countries in OECD, South Korea lags behind in performance when considering indicators such as the Gini coefficient and Palma ratio, especially when limiting the comparison to countries with similar populations.[11]

Income polarization (the income gap) has also not eased since the IMF stimulus, and thus is becoming more serious beginning in the 2010s.[12][13][14]

In 2014, the poverty gap index was 40%, which ranked third overall among high income countries. According to Wells X, the nation's top-tier 1390 people monopolize assets worth around Template:KRWConvert.[15]

The following table shows the number of people and earned income by annual salary in Korea.[16]

In 2019, an article published on Xinhua claimed that the government-led economic growth policy resulted in a drop in South Korea's Gini coefficient from 2018.[17] However, this has been attributed mainly due to sluggish economic growth among high-income earners, and has had little to no effect on the wide majority of the population.[18]

Economic inequality is often linked to low or limited social mobility, a situation which may instill a sense of hopelessness among South Korea's youth.[19] Gambling, though extremely limited due to its legality in South Korea, can be a dangerous source of debt for South Koreans who are susceptible to gambling and gambling addiction.[20] In 2017, the easy availability of cryptocurrrency in South Korea,[21] combined with a lack of legal outlets for gambling, has contributed to gambling problems and associated debt.[22] Others have also been led to suicide, which has remained the leading cause of deaths for a number of years.[23]

There are many causes for economic inequality, but the following causes are mainly talked about in South Korea.

Corruption is a serious problem in South Korea; all four living former South Korean presidents have been sentenced to prison for various crimes ranging from abuse of authority to bribery and embezzlement; with two still currently serving their sentences.[24][25][26][27][28]

Tertiary education was once seen by many South Koreans as a source of social mobility in the country. However, many now consider the education system to be elitist, resulting in only those connected to the chaebols and the government being able to easily get top spots in universities, civil service positions, while also for men even evading conscription entirely.[29][30]

South Korea suffered a severe financial crisis around the period from 1997 to 2001, and had to seek a loan from the International Monetary Fund (IMF) of about Template:KRWConvert to prevent total economic collapse.[31] The crisis was damning to the country, causing its worst recession in the post-war era. GDP growth had a negative 6.5% rate in 1998. In the aftermath of the crisis, unemployment rose from pre-crisis levels of 2% to 9.8% in 1998 and 8.1% in March 1999.[32]

The crisis also ensured a contraction in domestic investments. Conservative South Korean political parties attribute economic inequality to the slump in the domestic economy and strengthening the nation's economic structure to be dependent on exports. However, prior to the crisis, local companies used to make lax external investments, and ironically these over-investments ever since had a positive impact on employment.[32]

Many South Koreans believe that despite supposed economic recovery ever since, the country as a whole never really recovered from the crisis, with income gap widening especially among the middle and working classes.[32]

The intensification of social competition

South Korea is a hypercompetitive country, which results in enormous pressure. This is mainly as a result of sky high stakes in many aspects of South Korean society, including societal expectations such as education attainment, family background, and looks.[3] Those who do not have significant connections or conform with Korean beauty standards are ostracized, leading to reduced economic opportunities before one is even born.[33]

This also isn't helped by the physical appearance of many K-pop idols as well as celebrities, which has greatly impacted the beauty standards in the country.[34]

In the 2016 Hanyang University dissertation, a survey was conducted on the perception of economic inequality among generations. In the paper, 70 percent of the people held the government responsible for failing to narrow the income gap. A wide majority of South Koreans say that current government's policy on supposedly fixing inequality is not helping to bridge the gap between the rich and the poor.[36]

The poverty of low-income people is getting worse due to the long-term deterioration of employment in South Korea. The government has claimed that it has tried to increase employment every time over the past few years, but with no significant results.[37]

In 2018, the International Monetary Fund (IMF) mentioned that South Korea's income inequality was the poorest among 22 Asian-Pacific countries. In this article, while the nation's economic growth is growing fast, it also talked about inequality in household income due to the difficulty of finding jobs for young job seekers.[38]

A possible solution to bridge the gap between the rich and the poor is establishing a universal social safety net. However, South Korea's share of government spending on welfare is among the lowest among OECD countries, and the developed world in general, and the country is not considered to be a welfare state.[39]

Furthermore, South Korea has a negative outlook on enacting welfare policies or organizing influential trade unions. Many trade unions and the opposition groups they represent such as the Unified Progressive Party have often been shut down by the government under the controversial National Security Act.[40]

In 2018, A Korea University degree paper conducted a study on how social welfare policies could improve economic inequality. The paper says that the country's economic inequality between the rich and poor had a gap of 6.6 during the 1990s, but since 2009, it has been more than 15. The universal concept of social welfare was becoming increasingly prominent in the 21st century as economic inequality continued to rise. The paper said that it is necessary to reduce the desire to work as much as possible by increasing the cost of welfare while providing universal welfare, but by dividing the income class differently.[41]

In January 2019, president Moon Jae-in's economic adviser Kim Hyun-chul resigned for disparaging that young, unemployed Korean graduates or retirees who couldn't find a job in the country should stop "blaming the country and the government" and to "leave the country to become Korean language teachers".[42] He received severe public anger and criticism for his remark.

Other aspects of South Korean society