Short description: Condition in which a person is unemployed despite being willing to work

In the Shapiro-Stiglitz model workers are paid at a level where they do not shirk. This prevents wages from dropping to market clearing levels. Full employment cannot be achieved because workers would slack off if they were not threatened with the possibility of unemployment. The curve for the no-shirking condition (labeled NSC) goes to infinity at full employment.

Models based on implicit contract theory, like that of Azariadis (1975), are based on the hypothesis that labor contracts make it difficult for employers to cut wages. Employers often resort to layoffs rather than implement wage reductions. Azariadis showed that given risk-averse workers and risk-neutral employers, contracts with the possibility of layoff would be the optimal outcome.[2]

Efficiency wage models suggest that employers pay their workers above market-clearing wages in order to enhance their productivity.[1] In efficiency wage models based on shirking, employers are worried that workers may shirk knowing that they can simply move to another job if they are caught. Employers make shirking costly by paying workers more than the wages they would receive elsewhere, incentivising them not to shirk.[1] When all firms behave this way, an equilibrium is reached where there are unemployed workers willing to work at prevailing wages.[3] 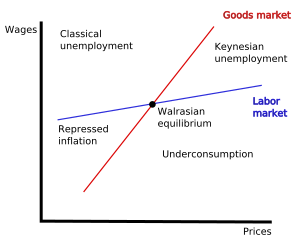 Following earlier disequilibrium research including that of Robert Barro and Herschel Grossman, work by Edmond Malinvaud clarified the distinction between classical unemployment, where real wages are too high for markets to clear, and Keynesian unemployment, involuntary unemployment due to inadequate aggregate demand.[1] In Malinvaud's model, classical unemployment is remedied by cutting the real wage while Keynesian unemployment requires an exogenous stimulus in demand.[5] Unlike implicit contrary theory and efficiency wages, this line of research does not rely on a higher than market-clearing wage level. This type of involuntary unemployment is consistent with Keynes' definition while efficiency wages and implicit contract theory do not fit well with Keynes' focus on demand deficiency.[6]

Shapiro and Stiglitz, developers of an influential shirking model, stated "To us, involuntary unemployment is a real and important phenomenon with grave social consequences that needs to be explained and understood."[8]

Other economists do not believe that true involuntary unemployment exists[10] or question its relevance to economic theory. Robert Lucas claims "...there is an involuntary element in all unemployment in the sense that no one chooses bad luck over good; there is also a voluntary element in all unemployment, in the sense that, however miserable one's current work options, one can always choose to accept them"[11] and "the unemployed worker at any time can always find some job at once".[11] Lucas dismissed the need for theorists to explain involuntary unemployment since it is "not a fact or a phenomenon which it is the task of theorists to explain. It is, on the contrary, a theoretical construct which Keynes introduced in the hope it would be helpful in discovering a correct explanation for a genuine phenomenon: large-scale fluctuations in measured, total unemployment."[12] Along those lines real business cycle and other models from Lucas's new classical school explain fluctuations in employment by shifts in labor supply driven by changes in workers' productivity and preferences for leisure.[1]