The United States federal budget is divided into three categories: mandatory spending, discretionary spending, and interest on debt. Also known as entitlement spending, in US fiscal policy, mandatory spending is government spending on certain programs that are mandated by law.[1] Congress established mandatory programs under authorization laws. Congress legislates spending for mandatory programs outside of the annual appropriations bill process. Congress can only reduce the funding for programs by changing the authorization law itself. This requires a 60-vote majority in the Senate to pass. Discretionary spending on the other hand will not occur unless Congress acts each year to provide the funding through an appropriations bill. 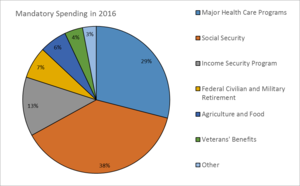 Many mandatory spending programs spending levels are determined by eligibility rules. Congress sets criteria for determining who is eligible to receive benefits from the program, and the benefit level for people who are eligible. The amount of money spent on each program each year is determined by how many people are eligible and apply for benefits.[5] Congress does not decide each year to increase or decrease the budget for Social Security or other earned benefit programs. Some mandatory spending programs are in effect indefinitely, but some, like agriculture programs, expire at the end of a given period. Legislation that affects mandatory spending is subject to House and Senate points of order. Congress can periodically review the eligibility rules and may change them in order to include or exclude more people or offer more or less generous benefits to those who are eligible and can therefore change the amount spent on the program. Most mandatory spending is used on entitlement programs. 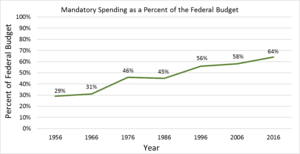 Mandatory Spending as a Percent of the Federal Budget

Persistent increases in health care spending have been the main drivers in increases in mandatory spending. Mandatory spending has grown from 4.9 percent of federal spending in FY 1970, to 25.7 percent of federal spending in FY 2016.[2] Health care cost per capita has grown much faster than the economy.[2] New medical technologies have transformed health care and led to increasing costs. Third-party reimbursement of health care costs by public and private insurance programs provided few incentives to control costs until the 1980s. The introduction of Medicare's prospective payment system for hospitals in 1983 and the increasing share of Health Maintenance Organizations in the mid-1980s helped to slow down health care costs.[2] Other attempts such as the Balanced Budget Act of 1997 have only been temporarily or partially successful in slowing down the rate of increased health care spending. In 2010,the passage of the Affordable Care Act established a mandate for most US residents to obtain health insurance, set up insurance exchanges, and expand Medicaid. Mandatory federal outlays for health programs increased as a result.[2]

Mandatory spending plays a large role in larger fiscal trends. During economic downturns, government revenues fall and expenditures rise as more people become eligible for mandatory programs such as Unemployment Insurance and Income Security programs. This causes deficits to increase or surpluses to shrink. Mandatory programs act as automatic stabilizers and provide a fiscal stimulus in the short run without the need for new legislative action.[2] During the recession in 2008 and 2009, mandatory spending increased by 31% due to federal financial interventions and the economic downturn. Much of the money went to the Troubled Asset Relief Program and aid to Government Sponsored Enterprises such as Fannie Mae and Freddie Mac. Increased spending on Unemployment Insurance and the Supplemental Nutrition Assistance Program also contributed to the spike in spending. Prior to the recession, mandatory spending on Supplemental Security Income accounted for around 1.5 percent of GDP, however following the recession it accounted for around 3 percent of GDP.[2] Many entitlement programs act as automatic stabilizers and as a result during economic downturns, the money needed to fund these programs increases significantly.

The number of beneficiaries of entitlement programs has grown as the average age of the population has risen. The Medicare Act of 1965 extended health benefits for most retirees and greatly expanded mandatory spending. As life expectancy has increased, the portion of the population over 85 has also increased, which has created a rise in Social Security and Medicare spending. CBO baseline projections show further increases in federal health care spending that will cause the total share of Medicare and Medicaid spending to rise. Federal spending on other health related programs is also projected to increase as larger portions of the Affordable Care Act take effect.[2] By FY2025, based on CBO baseline projections, spending on Medicare, Medicaid and other major federal health care programs is projected to account for 31 percent of total federal spending. Other programs such as Social Security Insurance and the Earned Income Tax Credit introduced in the 1970s, also increased the number of beneficiaries and thus mandatory spending.[2]