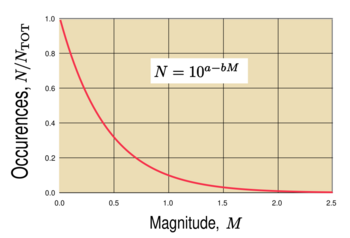 In seismology, the Gutenberg–Richter law[1] (GR law) expresses the relationship between the magnitude and total number of earthquakes in any given region and time period of at least that magnitude.

Since magnitude is logarithmic, this is an instance of the Pareto distribution. 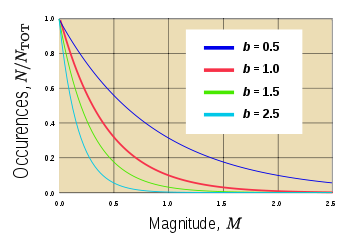 The parameter b (commonly referred to as the "b-value") is commonly close to 1.0 in seismically active regions. This means that for a given frequency of magnitude 4.0 or larger events there will be 10 times as many magnitude 3.0 or larger quakes and 100 times as many magnitude 2.0 or larger quakes. There is some variation of b-values in the approximate range of 0.5 to 2 depending on the source environment of the region.[3] A notable example of this is during earthquake swarms when b can become as high as 2.5, thus indicating a very high proportion of small earthquakes to large ones.

There is debate concerning the interpretation of some observed spatial and temporal variations of b-values. The most frequently cited factors to explain these variations are: the stress applied to the material,[4] the depth,[5] the focal mechanism,[6] the strength heterogeneity of the material,[7] and the proximity of macro-failure. The b-value decrease observed prior to the failure of samples deformed in the laboratory[8] has led to the suggestion that this is a precursor to major macro-failure.[9] Statistical physics provides a theoretical framework for explaining both the steadiness of the Gutenberg–Richter law for large catalogs and its evolution when the macro-failure is approached, but application to earthquake forecasting is currently out of reach.[10] Alternatively, a b-value significantly different from 1.0 may suggest a problem with the data set; e.g. it is incomplete or contains errors in calculating magnitude. 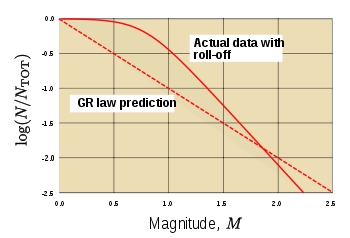 Roll-off compared to ideal GR law with b=1

There is an apparent b-value decrease for smaller magnitude event ranges in all empirical catalogues of earthquakes. This effect is described as "roll-off" of the b-value, a description due to the plot of the logarithmic version of the GR law becoming flatter at the low magnitude end of the plot. This may in large part be caused by incompleteness of any data set due to the inability to detect and characterize small events. That is, many low-magnitude earthquakes are not catalogued because fewer stations detect and record them due to decreasing instrumental signal to noise levels. Some modern models of earthquake dynamics, however, predict a physical roll-off in the earthquake size distribution.[11]

The a-value represents the total seismicity rate of the region. This is more easily seen when the GR law is expressed in terms of the total number of events:

Modern attempts to understand the law involve theories of self-organized criticality or self similarity.

New models show a generalization of the original Gutenberg–Richter model. Among these is the one released by Oscar Sotolongo-Costa and A. Posadas in 2004,[12] of which R. Silva et al. presented the following modified form in 2006,[13]

where N is the total number of events, a is a proportionality constant and q represents the non-extensivity parameter introduced by Constantino Tsallis to characterize systems not explained by the Boltzmann–Gibbs statistical form for equilibrium physical systems.

It is possible to see in an article published by N. V. Sarlis, E. S. Skordas, and P. A. Varotsos,[14] that above some magnitude threshold this equation reduces to original Gutenberg–Richter form with

A new generalization was published using Bayesian statistical techniques,[17] from which an alternative form for parameter b of Gutenberg–Richter is presented. The model was applied to intense earthquakes occurred in Chile, from the year 2010 to the year 2016.