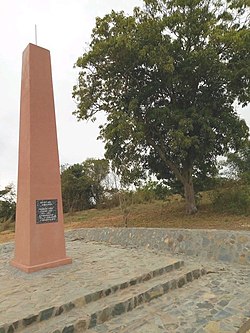 Stele to remember the number of Africans who were taken to the Americas, Republic of the Congo 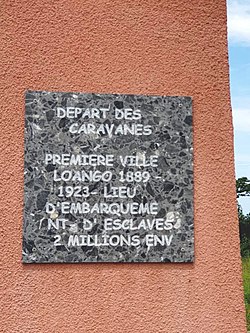 Stele to remember the number of Africans who were taken to the Americas, Republic of the Congo

Loango Slavery Harbour is part of the Hinda district, in Kouilou department. This site is limited by:  Pointe Indienne to the Southeast, Atlantic Ocean to the South and to the Southwest, to the North-West the village of Matombi and to the northeast the small town of Diosso, the former administrative district of Bwali, capital of the Kingdom of Loango.

It is overlooked by the ancient lagoon of Tchibete that the relentless marine erosion has almost completely erased. Herbaceous vegetation is dominated by small-sized trees, with sandy soil influenced by the marine climate.[1]

From 1500 to 1867, the vessels in the Atlantic slave trade moved nearly 12.5 million African slaves from the coast of Africa to the Americas and the Caribbean.

The below table summarizes the various slave boarding points on the African coasts, as well as an estimate of the corresponding number of slaves.[2][3]

Despite its importance as a site of intercultural exchanges in the modern world and its major contribution to the development of the Atlantic world through the transatlantic slave trade, the study of the coast of Loango did not have a lot of interest from scholarships. Phylis Martin is one of them.[4]

An interesting literature has existed since the years 1980. However, it focused on the southern part of the mouth of the Congo River, namely Angola, dominated by the Kingdom of Portugal . Focusing on Portuguese activities and archives, these studies have obscured the operation of trade in the Loango coast, a kind of "free zone" where local, British, French and Dutch merchants played a key role.[5]

If we combine the numbers of Central Africa (Angola and Loango) and those of the East Coast, we find that nearly 6.2 million of slaves (about half of the total) are from countries speaking Bantu languages. The different ports of Central Africa are:

Due to the number of captives passing through its site to the Americas, the former port of embarkation of Loango slaves is one of the most important in the Gulf of Guinea. More than 2 million slaves from the areas that today constitute Chad, Angola, southern Gabon, Democratic republic of the Congo and the current territory of the Republic of the Congo, would have transited through this site. 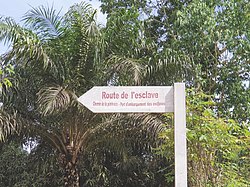 Slave route, Bay of Loango, Republic of the Congo

Before 1660, the Europeans travelled to the coast of Loango to obtain supplies of fabrics, ivory, rare wood (okoume, Padouk) and elephant tails.

The fabrics particularly played an essential role in the everyday life of the inhabitants. In addition to their roles in furniture and clothing, the cloths were used in the ceremonies of induction, initiation and burial and also as a currency of exchange.

One of the important access points for foreign traders of the 17th century was the commercial port of the Bay of Loango, located about 10 km from Bwali, the capital of the kingdom of Loango. They were then escorted to Bwali in hopes of being granted an audience with the Maloango, or meeting with royal officials (Mafouk) to negotiate the terms of the exchange.[7][8]

In parallel, the Kingdom of Loango maintains trade with its neighbours from within. The access roads constituting this network are to the North the road to Mayumba, the Pool Malebo to the east and to Luanda to the south, passing through the kingdoms of Ngoyo and Kakongo. These are the famous caravan routes.

From 1650, the influence of raffia fabrics will decrease to the benefit of fabrics imported from Europe and the West Indies. The Dutch traders, newcomers to the coast of Loango, little interested in raffia, preferred to exchange slaves, ivory or copper in exchange for Western cloths and garments. These latest were quickly adopted by the notable Loango, in addition to the usual attributes such as leopard skins or other royal adornments.[9]

Between 1660 and 1867, the foreign trade in goods was definitively replaced by that of men. And it is the kingdom of Loango that sets the rules in its exchanges with the French, English or Dutch merchants, by making the competition between them. The merchants of Loango preferred their manufactured products compared to those of the Portuguese, as they found them to be better quality and cheaper.

When his interests are threatened, in particular by the Portuguese, the Kingdom does not hesitate to recall that he is a master on his territory and that he trades with whoever he pleases. To violate local rules was to take the risk of retaliation for the offender (death, or delay in supplying the ships with goods...).[10]

In the meantime, during which the mechanisms of this long-running trade were established, at least 475 000 slaves integrated the triangular trade flows, from the ports of the Loango coast (Loango Bay , Malemba and Cabinda Bay)[11]..

1.3 million additional captives leaving the same ports were recorded between 1811 and 1867 on board Portuguese, Brazilian and American ships. This makes the coast of Loango, one of the five most important African zones of triangular trade.

The factories at that time corresponded no less to a warehouse than to a branch of the parent company, which the European trader used as outpost to store the goods disembarked from the boat, before selling them or storing the slaves in waiting for the trip to the Americas. However, suspicious of the Portuguese and their role in the destabilization of their mighty neighbor, the kingdom of Kongo, from the forts installed along the Angolan coast, the Kingdom of Loango did not accept permanent installation of Factory.[12]

Unless, between 1608 and 1612, thanks to the interpersonal skills of Pieter van den Broecke, Dutch merchants installed factories in Mayumba and on Loango Bay to provide copper and ivory spikes.[13]

In the face of Dutch competition, in 1624, Souza, the Portuguese governor of Luanda, asked the Maloango to close the competing factories. and expel these heretics. On the other hand, the governor promises to buy all the stocks of ivory and copper, to provide better quality products, to ensure his protection in the event of an enemy invasion and finally to send Jesuit priests to baptize the Ma Loango. The latter strongly retorted that he would continue to trade with both parties under the same conditions and that he had no intention of converting to Catholicism.

Thus, the Loango remained in control of its territorial integrity by controlling its economic relations, religious with the Atlantic powers. With its political and economic ascent, the area of influence of the Loango extended northward. At the end of the seventeenth century, with the disparting of the Kingdom of Kongo, the Loango also extended its influence towards the south by inaugurating a new model of road networks.[14] 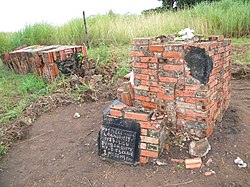 Old stele to remember the number of Africans who were taken to the Americas, Republic of the Congo

Joseph Kimfoko Madoungou[15][16](who has since a well-deserved retirement), is the former curator of the Museum of Diosso, located nearby, and has served as a guide to visitors to the harbour. Over the years he has perpetuated, with modest means, the memory of this place which has become the sanctuary of wild vegetation.

The port still keeps the remains of the transatlantic trade:

mango trees (Mangifera indica L.) are a powerful symbol of the slave trade. In fact, these trees were first transported to Central and western Africa in the cargo of Portuguese ships of the fifteenth and sixteenth centuries from their original domestication centres, India and Southeast Asia. The arrival of Mango in Africa, and then in Brazil, was part of a world trade of exotic fruits that included pineapple (Ananas comosus), banana (Musa), guava (Psidium Guajava), to name but a few examples.[8]

From the point of view of tradition, Father Raphael Nzaou, the head of the Catholic mission of Loango provides two explanations on the symbolic and origin of these mango trees. In the first, it describes how the slaves, in their march to the coast, have dropped the nuclei of mangoes which then turned into mango trees along the way. Mangoes thus symbolized their last African meal before they left for the Americas, which was under the understanding as a death. In the second explanation, the abbot tells how those who had remained on the land of Loango, planted a mango tree as a memorial of the missing near. He adds that, always nowadays, it is common to plant a tree on the funeral site of a deceased person.[8]

In addition, the historical and emotional burden of this site is always noticeable. It is indeed the place where there are always several rites of induction and funeral of the Mâ Loango, the kings of the Kingdom of Loango.

The cultural importance of this site is also noticeable through the laments always sung by the inhabitants who remained on this sinister place, recalling the nostalgia of the descendants, remained to wait for loved ones torn from their affection and that they will never see again. Thus, the former port of embarkation, which has become a veritable sanctuary for its historical burden, is a key link for understanding the history of slavery.[1]

On 12 June 2008, the site was included in the tentative list of world cultural heritage[1] and is part of the Unesco Slave Route Project.[18]

Since then, almost nothing has been done to highlight this vestige. This makes more than one visitor shocked by this state of abandonment.

Samuel Mabandza, departmental director of heritage in the Department of Kouilou, assures that "the Congolese state is not insensitive to this situation". He adds that "it is planned to build an African city of arts surrounded by museums in the open air, in order to enhance the old port of embarkation of slaves." "An action that will also benefit local communities",[17] he confides, without providing more details as to the deadlines for carrying out the project.