In historiography, rural history is a field of study focusing on the history of societies in rural areas. At its inception, the field was based on the economic history of agriculture. Since the 1980s it has become increasingly influenced by social history and has diverged from the economic and technological focuses of "agricultural history". It can be considered a counterpart to urban history.

A number of academic journals and learned societies exist to promote rural history.

Rural history emerged as a distinct discipline from agricultural history in the 1980s and was inspired by the French Annales school which favoured integrating economic, social and political history.[1] Initially focused predominantly on the social history of rural life and later became increasingly interested in cultural history.[2]

In Europe, the study of rural history is supported by the European Rural History Organisation (ERHO).

Burchardt (2007) evaluates the state of English rural history and focuses on an "orthodox" school dealing chiefly with the economic history of agriculture. The orthodox historians made "impressive progress" in quantifying and explaining the growth of output and productivity since the agricultural revolution. A challenge came from a dissident tradition that looked chiefly at the negative social costs of agricultural progress, especially enclosure. In the late 20th century there arose a new school, associated with the journal Rural History. Led by Alun Howkins,[3] it links rural Britain to a wider social history. Burchardt calls for a new countryside history, paying more attention to the cultural and representational aspects that shaped 20th-century rural life.[4]

In the U.S. most rural history has focused on the South—overwhelmingly rural until the 1950s—but there is a "new rural history" of the North as well. Instead of becoming agrarian capitalists, farmers held onto preindustrial capitalist values emphasizing family and community. Rural areas maintained population stability; kinship ties determined rural immigrant settlement and community structures; and the defeminization of farm work encouraged the rural version of the "women's sphere." These findings strongly contrast with those in the old frontier history as well as those found in the new urban history.[5]

Modernization came in the 20th century, with the arrival of mechanization, the model T, and the agricultural agent—as well as radio.[6] 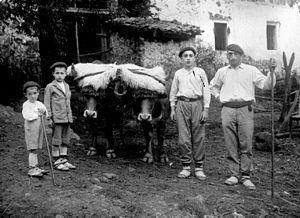 Farmers from the Basque Country

Rural history has been a major specialty of French scholars since the 1920s, thanks especially to the central role of the Annales School. Its journal Annales focuses attention on the synthesizing of historical patterns identified from social, economic, and cultural history, statistics, medical reports, family studies, and even psychoanalysis.[7]

A number of academic journals exist with a specific focus on rural history. These include:

Curtis, D., 'Trends in rural social and economic history of the pre-industrial Low Countries: recent themes and ideas in journals and books of the past five years (2007-2013)', review essay in BMGN: Low Countries Historical Review 128.3 (2013) 60-95.