"The Geographical Pivot of History" is an article submitted by Halford John Mackinder in 1904 to the Royal Geographical Society that advances his heartland theory.[1][2][3] In this article, Mackinder extended the scope of geopolitical analysis to encompass the entire globe.

The World-Island and the Heartland

According to Mackinder, the Earth's land surface was divisible into:

The Heartland lay at the centre of the world island, stretching from the Volga to the Yangtze and from the Himalayas to the Arctic. Mackinder's Heartland was the area then ruled by the Russian Empire and after that by the Soviet Union, minus the Kamchatka Peninsula region, which is located in the easternmost part of Russia, near the Aleutian Islands and Kurile islands.

Any power which controlled the World-Island would control well over 50% of the world's resources. The Heartland's size and central position made it the key to controlling the World-Island.

The vital question was how to secure control for the Heartland. This question may seem pointless, since in 1904 the Russian Empire had ruled most of the area from the Volga to Eastern Siberia for centuries. But throughout the nineteenth century:

Mackinder held that effective political domination of the Heartland by a single power had been unattainable in the past because:

He outlined the following ways in which the Heartland might become a springboard for global domination in the twentieth century (Sempa, 2000):

The combined empires' large East Asian coastline would also provide the potential for it to become a major sea power. Mackinder's "Who rules East Europe commands the Heartland…" does not cover this scenario, probably because the previous two scenarios were seen as the major risks of the nineteenth century and the early 1900s.

One of Mackinder's personal objectives was to warn Britain that its traditional reliance on sea power would become a weakness as improved land transport opened up the Heartland for invasion and/or industrialisation (Sempa, 2000).

A more modern development to which the heartland theory can still be attributed to exist is through Russia's oil pipelines scandals. Heartland theory implies that the world island is full of resources to be exploited. "Any initiative by the United States to open the market access in Central Asia implies that this state is targeted for the exploration of multinational energy companies. The efforts of domination for the exploration of natural resources are also apparent in the case of Russia. Study found that Russia wants to have pipelines be transported through its territory. However the Russian energy companies are working on behalf of market interests, they often constrain the behaviour of the state".[4]

Influence on other geopolitical models 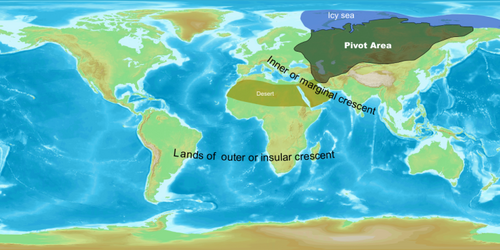 Colour representation, using a modern projection of the world.

K. S. Gadzhev, in his book Vvedenie v geopolitiku (Introduction to Geopolitics) raises a series of objections to Mackinder's Heartland; to start with that the significance physiography is given there for political strategy is a form of geographical determinism.[5]

Critics of the theory also argue that in modern day practice, the theory is outdated due to the evolution of technological warfare, as at the time of publication, Mackinder only considered land and sea powers. In modern day time there are possibilities of attacking a rival without the need for a direct invasion via cyber attacks, aircraft or even use of long range missile strikes.

Mackinder's theory was also never fully proven[6] as no singular power in history has had control of all three of the regions at the same time. The closest this ever occurred was during the Crimean War (1853-1856) whereby Russia attempted to fight for control over the Crimean Peninsula, ultimately losing to the French and the British.