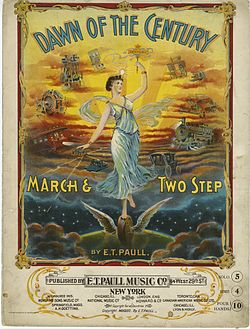 Turn of the century, in its broadest sense, refers to the transition from one century to another. The term is most often used to indicate a distinctive time period either before or after the beginning of a century or both before and after.

According to the Chicago Manual of Style online Q&A, there is no common agreement as to the meaning of the phrase "turn of the n-th century." For instance, if a statement describes an event as taking place "at the turn of the 18th century," it could refer to a period around the year 1701 or around 1800, that is, the beginning or end of that century. As a result, they recommend either using only "turn of the century," and only in a context that makes clear which transition is meant,[1] or alternatively to use a different expression that is unambiguous.[2] "Turn of the century" commonly meant the transition from the 19th century to the 20th century; however, as the generations living at the end of the 20th century survived into the 21st century, the specific number of the referenced century became necessary to avoid confusion.[3]