An invention is a unique or novel device, method, composition or process. The invention process is a process within an overall engineering and product development process. It may be an improvement upon a machine or product or a new process for creating an object or a result. An invention that achieves a completely unique function or result may be a radical breakthrough. Such works are novel and not obvious to others skilled in the same field. An inventor may be taking a big step toward success or failure.

Some inventions can be patented. A patent legally protects the intellectual property rights of the inventor and legally recognizes that a claimed invention is actually an invention. The rules and requirements for patenting an invention vary by country and the process of obtaining a patent is often expensive.

Another meaning of invention is cultural invention, which is an innovative set of useful social behaviours adopted by people and passed on to others.[1] The Institute for Social Inventions collected many such ideas in magazines and books.[2] Invention is also an important component of artistic and design creativity. Inventions often extend the boundaries of human knowledge, experience or capability.

Inventions are of three kinds: scientific-technological (including medicine), sociopolitical (including economics and law), and humanistic, or cultural.

Sociopolitical inventions comprise new laws, institutions, and procedures that change modes of social behavior and establish new forms of human interaction and organization. Examples include the British Parliament, the US Constitution, the Manchester (UK) General Union of Trades, the Boy Scouts, the Red Cross, the Olympic Games, the United Nations , the European Union, and the Universal Declaration of Human Rights, as well as movements such as socialism, Zionism, suffragism, feminism, and animal-rights veganism.

Humanistic inventions encompass culture in its entirety and are as transformative and important as any in the sciences, although people tend to take them for granted. In the domain of linguistics, for example, many alphabets have been inventions, as are all neologisms (Shakespeare invented about 1,700 words). Literary inventions include the epic, tragedy, comedy, the novel, the sonnet, the Renaissance, neoclassicism, Romanticism, Symbolism, Aestheticism, Socialist Realism, Surrealism, postmodernism, and (according to Freud) psychoanalysis. Among the inventions of artists and musicians are oil painting, printmaking, photography, cinema, musical tonality, atonality, jazz, rock, opera, and the symphony orchestra. Philosophers have invented logic (several times), dialectics, idealism, materialism, utopia, anarchism, semiotics, phenomenology, behaviorism, positivism, pragmatism, and deconstruction. Religious thinkers are responsible for such inventions as monotheism, pantheism, Methodism, Mormonism, iconoclasm, puritanism, deism, secularism, ecumenism, and Baha’i. Some of these disciplines, genres, and trends may seem to have existed eternally or to have emerged spontaneously of their own accord, but most of them have had inventors.[3] 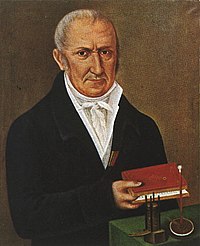 Alessandro Volta with the first electrical battery. Volta is recognized as an influential inventor.

Ideas for an invention may be developed on paper or on a computer, by writing or drawing, by trial and error, by making models, by experimenting, by testing and/or by making the invention in its whole form. Brainstorming also can spark new ideas for an invention. Collaborative creative processes are frequently used by engineers, designers, architects and scientists. Co-inventors are frequently named on patents.

In the process of developing an invention, the initial idea may change. The invention may become simpler, more practical, it may expand, or it may even morph into something totally different. Working on one invention can lead to others too.[8]

History shows that turning the concept of an invention into a working device is not always swift or direct. Inventions may also become more useful after time passes and other changes occur. For example, the parachute became more useful once powered flight was a reality.[9] 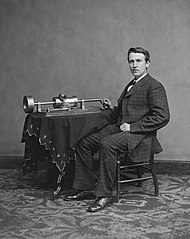 Thomas Edison with phonograph. Edison was one of the most prolific inventors in history, holding 1,093 U.S. patents in his name.

Invention is often a creative process. An open and curious mind allows an inventor to see beyond what is known. Seeing a new possibility, connection or relationship can spark an invention. Inventive thinking frequently involves combining concepts or elements from different realms that would not normally be put together. Sometimes inventors disregard the boundaries between distinctly separate territories or fields. Several concepts may be considered when thinking about invention.

Play may lead to invention. Childhood curiosity, experimentation, and imagination can develop one's play instinct. Inventors feel the need to play with things that interest them, and to explore, and this internal drive brings about novel creations.[10][11]

Sometimes inventions and ideas may seem to arise spontaneously while daydreaming, especially when the mind is free from its usual concerns.[12] For example, both J. K. Rowling (the creator of Harry Potter)[13] and Frank Hornby (the inventor of Meccano)[14] first had their ideas while on train journeys.

To invent is to see anew. Inventors often envision a new idea, seeing it in their mind's eye. New ideas can arise when the conscious mind turns away from the subject or problem when the inventor's focus is on something else, or while relaxing or sleeping. A novel idea may come in a flash—a Eureka! moment. For example, after years of working to figure out the general theory of relativity, the solution came to Einstein suddenly in a dream "like a giant die making an indelible impress, a huge map of the universe outlined itself in one clear vision".[16] Inventions can also be accidental, such as in the case of polytetrafluoroethylene (Teflon).

Insight can also be a vital element of invention. Such inventive insight may begin with questions, doubt or a hunch. It may begin by recognizing that something unusual or accidental may be useful or that it could open a new avenue for exploration. For example, the odd metallic color of plastic made by accidentally adding a thousand times too much catalyst led scientists to explore its metal-like properties, inventing electrically conductive plastic and light emitting plastic-—an invention that won the Nobel Prize in 2000 and has led to innovative lighting, display screens, wallpaper and much more (see conductive polymer, and organic light-emitting diode or OLED).[17]

A rare 1884 photo showing the experimental recording of voice patterns by a photographic process at the Alexander Graham Bell Laboratory in Washington, D.C. Many of their experimental designs panned out in failure.

Invention is often an exploratory process with an uncertain or unknown outcome. There are failures as well as successes. Inspiration can start the process, but no matter how complete the initial idea, inventions typically must be developed. 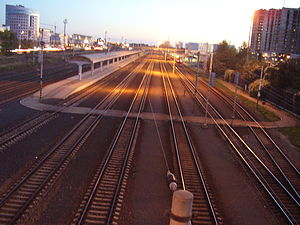 In the social sciences, an innovation is something that is new and better, and has been adopted and proven to create positive value. This is a key distinction from an invention which may not create positive value but furthers progress in a given area of development. The theory for adoption of an innovation, called diffusion of innovations, considers the likelihood that an innovation is adopted and the taxonomy of persons likely to adopt it or spur its adoption. This theory was first put forth by Everett Rogers.[18][19] Gabriel Tarde also dealt with the adoption of innovations in his Laws of Imitation.[20]

An invention can serve many purposes, and does not necessarily create positive value. These purposes might differ significantly and may change over time. An invention or its development may serve purposes never envisioned by its inventors. Plastic is a good example.[10][21][22][23][24][25][26][27][28][29][30][31]

As defined by patent law

In Europe, the first test a patent application must pass is, "Is this an invention?" If it is, subsequent questions are whether it is new and sufficiently inventive. The implication—counter-intuitively—is that a legal invention is not inherently novel. Whether a patent application relates to an invention is governed by Article 52 of the European Patent Convention, that excludes, e.g., discoveries as such and software as such. The EPO Boards of Appeal decided that the technical character of an application is decisive for it to represent an invention, following an age-old Italian and German tradition. British courts don't agree with this interpretation. Following a 1959 Australian decision ("NRDC"), they believe that it is not possible to grasp the invention concept in a single rule. A British court once stated that the technical character test implies a "restatement of the problem in more imprecise terminology."

In the United States, all patent applications are considered inventions. The statute explicitly says that the American invention concept includes discoveries (35 USC § 100(a)), contrary to the European invention concept. The European invention concept corresponds to the American "patentable subject matter" concept: the first test a patent application is submitted to. While the statute (35 USC § 101)[32] virtually poses no limits to patenting whatsoever, courts have decided in binding precedents that abstract ideas, natural phenomena and laws of nature are not patentable. Various attempts have been made to substantiate the "abstract idea" test, which suffers from abstractness itself, but none have succeeded. The last attempt so far was the "machine or transformation" test, but the U.S. Supreme Court decided in 2010 that it is merely an indication at best.

In India, invention means a new product or process that involves an inventive step, and capable of being made or used in an industry. Whereas, "new invention" means any invention that has not been anticipated in any prior art or used in the country or any where in the world.[33]

Invention has a long and important history in the arts. Inventive thinking has always played a vital role in the creative process.[34] While some inventions in the arts are patentable, others are not because they cannot fulfill the strict requirements governments have established for granting them. (see patent).

Some inventions in art include the:

Likewise, Jackson Pollock invented an entirely new form of painting and a new kind of abstraction by dripping, pouring, splashing and splattering paint onto un-stretched canvas lying on the floor.

Inventive tools of the artist's trade also produced advances in creativity. Impressionist painting became possible because of newly invented collapsible, resealable metal paint tubes that facilitated spontaneous painting outdoors. Inventions originally created in the form of artwork can also develop other uses, e.g. Alexander Calder's mobile, which is now commonly used over babies' cribs. Funds generated from patents on inventions in art, design and architecture can support the realization of the invention or other creative work. Frédéric Auguste Bartholdi's 1879 design patent on the Statue of Liberty helped fund the famous statue because it covered small replicas, including those sold as souvenirs.[37]

The timeline for invention in the arts lists the most notable artistic inventors.