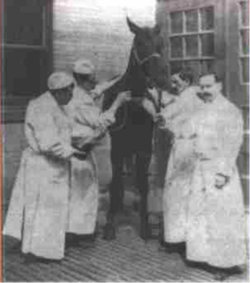 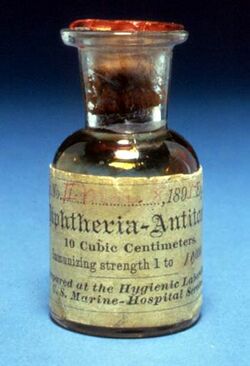 On October 2, 1901, Jim showed signs that he had contracted tetanus and was euthanized. After the death of a girl in St. Louis was traced back to Jim's contaminated serum, it was discovered that serum dated September 30 contained tetanus in its incubation phase. This contamination could have easily been discovered if the serum had been tested prior to its use. Furthermore, samples from September 30 had also been used to fill bottles labeled "August 24," while actual samples from the 24th were shown to be free of contamination.[1]

These failures in oversight led to the distribution of antitoxin that caused the death of 12 more children. This incident, and a similar one involving contaminated smallpox vaccine, led to the passage of the Biologics Control Act of 1902, which established the Center for Biologics Evaluation and Research. Jim's misfortune, and the ensuing tragedy and reaction, thus established a precedent for the regulation of biologics, leading to the 1906 formation of the US Food and Drug Administration (FDA).[2][3]