Neonatal tetanus (trismus nascentium) is a form of generalised tetanus that occurs in newborns. Infants who have not acquired passive immunity from an immunized mother are at risk. It usually occurs through infection of the unhealed umbilical stump, particularly when the stump is cut with a non-sterile instrument. Neonatal tetanus mostly occurs in developing countries, particularly those with the least developed health infrastructure. It is rare in developed countries.[1]

The WHO recommend that unimmunized pregnant women receive tetanus toxoid in the pregnancy to prevent the disease in their baby once born.[2]

In neonatal tetanus, symptoms usually appear from 4 to 14 days after birth, averaging about 7 days. The fatality rate for infants has been estimated as 70% to 100%; death usually occurs by the age of 2 weeks.[3] On the basis of clinical findings, four different forms of tetanus have been described.[4] The time from exposure to symptoms may be up to several months.[5] The neonate is unable to suck and cry, is rigid, and develops spasms. 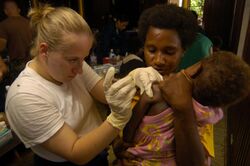 A tetanus shot is administered to a child and her mother

The spores which cause tetanus are present everywhere, so the only prevention is immunization. Three properly spaced doses of tetanus toxoid vaccine are recommended for women of childbearing age, either before or during pregnancy; this will protect their future babies from neonatal tetanus after delivery.[3]

In 1989, the World Health Congress called for the elimination of neonatal tetanus. UNICEF took the lead, assisted by other United Nations agencies, individual governments, and non-profit organisations. By 2000, the disease was declared as eliminated from 104 of 161 developing countries.[6] "Elimination" is defined as less than 1 case per 1,000 live births in every district of the country.[3] Since tetanus can also strike postpartum mothers, the campaign has been expanded to target both maternal and neonatal tetanus.[3]

In many affected countries, there was a lack of awareness of maternal and neonatal tetanus and how to prevent it. Education and immunisation campaigns have been launched in the remaining countries at risk and are targeted particularly at pregnant women.[1] Education focuses on hygienic birth practices and infant cord care as well as the need for immunisation.[7] 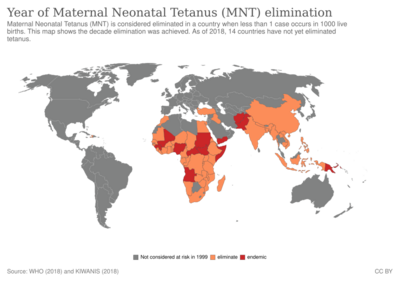 Countries that have eliminated maternal neonatal tetanus as of 2018.[12]