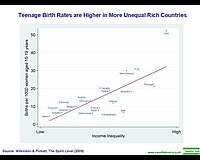 Industrialized and developing countries have distinctly different rates of teenage pregnancy. In developed regions, such as United States, Canada, Western Europe, Australia, and New Zealand, teen parents tend to be unmarried, and adolescent pregnancy is seen as a social issue.

By contrast, teenage parents in developing regions such as Africa, Asia, Eastern Europe, Latin America, and the Pacific Islands (in some civilizations) are often married, and their pregnancy may be welcomed by family and society. However, in these societies, early pregnancy may combine with malnutrition and poor health care to cause long-term medical problems for both the mother and child. A report by Save the Children found that, annually, 13 million children are born to women under age 20 worldwide. More than 90% of these births occur to women living in developing countries. Complications of pregnancy and childbirth are the leading cause of mortality among women between the ages of 15 and 19 in such areas, as they are the leading cause of mortality among older women.

The age of the mother is determined by the easily verified date when the pregnancy ends, not by the estimated date of conception.[2] Consequently, the statistics do not include women who first became pregnant before their 20th birthdays, if those pregnancies did not end until on or after their 20th birthdays.[2]

The highest rate of teenage pregnancy in the world — 143 per 1,000 girls aged 15–19 years — is in sub-Saharan Africa.[3] Women in Africa, in general, get married at a much younger age than women elsewhere — leading to earlier pregnancies. In Nigeria, according to the Health and Demographic Survey in 1992, 47% of women aged 20–24 were married before 15, and 87% before 18. Also, 53% of those surveyed had given birth to a child before the age of 18.[4] African countries have the highest rates of teenage birth (2002)[5] According to data from World Bank, as of 2015, the highest incidence of births among 15- to 19-year-old girls was in Niger, Mali, Angola, Guinea, and Mozambique.[6]

A Save the Children report identified 10 countries where motherhood carried the most risks for young women and their babies. Of these, 9 were in sub-Saharan Africa, and Niger, Liberia, and Mali were the nations where girls were the most at-risk. In the 10 highest-risk nations, more than one in six teenage girls between the ages of 15 and 19 gave birth annually, and nearly one in seven babies born to these teenagers died before the age of one year.[7]

Surveys from Thailand have found that a significant minority of unmarried adolescents are sexually active. Although premarital sex is considered normal behavior for males, particularly with prostitutes, it is not always regarded as such for females. Most Thai youth reported that their first sexual experience, whether within or outside of marriage, was without contraception. The adolescent fertility rate in Thailand is relatively high at 60 per 1000. 25% of women admitted to hospitals in Thailand for complications of induced abortion are students. The Thai government has undertaken measures to inform the nation's youth about the prevention of sexually transmitted diseases and unplanned pregnancy.

According to the World Health Organization, in several Asian countries including Bangladesh and Indonesia, a large proportion (26-37%) of deaths among female adolescents can be attributed to maternal causes.[8]

The rates of teenage pregnancy may vary widely within a country. For instance, in the United Kingdom, the rate of adolescent pregnancy in 2002 was as high as 100.4 per 1000 among young women living in the London Borough of Lambeth, and as low as 20.2 per 1000 among residents in the Midlands local authority area of Rutland. In Italy, the teenage birth rate in central regions is only 3.3 per 1,000, but, in the Mezzogiorno it is 10.0 per 1000.

Teenage birth is often associated with economic and social issues: such as alcohol and drug misuse and, across 13 nations in the European Union, women who gave birth as teenagers were twice as likely to be living in poverty, compared with those who first gave birth when they were over 20.[11]

Romania and Bulgaria have some of the highest teenage birth rates in Europe. As of 2015, Bulgaria had a birth rate of 37/1.000 women aged 15-19, and Romania of 34.[12] Both countries also have very large Romani populations, who have an occurrence of teenage pregnancies well above the local average.[13][14][15]

In recent years, the number of teenage mothers is declining in Bulgaria.

The Netherlands has a low rate of births and abortions among teenagers (5 births per 1,000 women aged 15–19 in 2002[5]). Compared with countries with higher teenage birth rates, the Dutch have a higher average age at first intercourse and increased levels of contraceptive use (including the "double Dutch" method of using both a hormonal contraception method and a condom ).

In some countries, such as Italy and Spain, the rate of adolescent pregnancy is low (6 births per 1,000 women aged 15–19 in 2002 in both countries).[5] These two countries also have low abortion rates (lower than Sweden and the other Nordic countries)[17] and their teenage pregnancy rates are among the lowest in Europe. However, Portugal, has a relatively high rate of teenage pregnancy (17 births per 1,000 women aged 15–19 in 2002).[5]

The UK has one of the highest teenage birth rates in Europe with a rate of 26.4 teenage births per 1,000 women aged 15–19 in 2006, down from 27.9 births in 2001.[18] The UK also has a higher rate of abortion than most European countries. Of young Britons reported engaging in sexual intercourse whilst in their teens, 80% said they did not use a form of contraception , although a half of those under 16, and one-third of those between 16 and 19, said they did not use a form of contraception during their first encounter{{Citation needed|date=November 2019} ried.[19] Adolescent pregnancy is viewed as a matter of concern by both the British government and the British press[citation needed].

In 2016, the Minister of Health and Social Protection of Colombia, Alejandro Gaviria Uribe announced that "teenage pregnancy decreased by two percentage points breaking the growing tendency that had been seen since the nineties".[21]

The U.S. teen birth rate was 53 births per 1,000 women aged 15–19 in 2002,[5] the highest in the developed world.[11] If all pregnancies, including those that end in abortion or miscarriage, are taken into account, the total rate in 2000 was 75.4 pregnancies per 1,000 girls. Nevada and the District of Columbia have the highest teen pregnancy rates in the U.S., while North Dakota has the lowest.[24] Over 80% of teenage pregnancies in the U.S. are unintended;[25] approximately one third end in abortion, one third end in spontaneous miscarriage, and one third will continue their pregnancy and keep their baby.[26]

However, the trend is decreasing: in 1990, the birth rate was 61.8, and the pregnancy rate 116.9 per thousand. This decline has manifested across all races, although teenagers of African-American and Hispanic descent retain a higher rate, in comparison to that of European-Americans and Asian-Americans. The Guttmacher Institute attributed about 25% of the decline to abstinence and 75% to the effective use of contraceptives.[24]

Within the United States teen pregnancy is often brought up in political discourse. The goal to limit teen pregnancy is shared by Republicans and Democrats, though avenues of reduction are usually different. Many Democrats cite teen pregnancy as proof of the continuing need for access to birth control and sexual education, while Republicans often cite a need for returning to conservative values, often including abstinence.

The birth rate for women aged 15–19 is one of the World Bank's World Development Indicators. The data for most countries and a variety of groupings (e.g. Sub-Saharan Africa or OECD members) are published regularly, and can be viewed or downloaded from a United Nations website.[27]

https://en.wikipedia.org/wiki/Prevalence of teenage pregnancy was the original source. Read more.