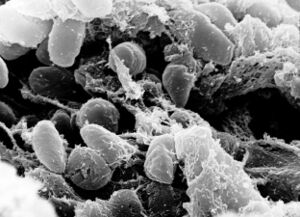 Urban plague is an infectious disease among rodent species that live in close association with humans in urban areas. It is caused by the bacterium Yersinia pestis which is the same bacterium that causes bubonic and pneumonic plague in humans. Plague was first introduced into the United States in 1900 by rat–infested steamships that had sailed from affected areas, mostly from Asia. Urban plague spread from urban rats to rural rodent species, especially among prairie dogs in the western United States.[1][2]

Urban plague can be spread from animals to humans via flea bites and handling of infected fluids and tissues. Human to human infection occurs from droplets that contain plague bacteria which are produced when an infected person coughs.[4]