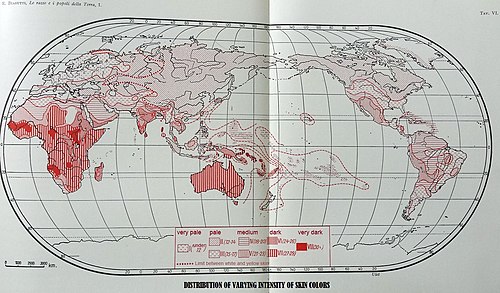 Map of human skin color distribution for native populations, by R. Biasutti in the von Luschan's chromatic scale for classifying skin color. It was reported that for areas with no data Biasutti simply filled in the map by extrapolation from findings obtained in other areas.[1]

Von Luschan's chromatic scale (VLS) is a method of classifying skin color. It is also called the von Luschan scale or von Luschan's scale. It is named after its inventor, Felix von Luschan. The equipment consists of 36 opaque glass tiles which were compared to the subject's skin, ideally in a place which would not be exposed to the sun (such as under the arm). The von Luschan scale was used to establish racial classifications of populations according to skin color; in this respect it is in contrast to the Fitzpatrick scale intended for the classification of the skin type of individuals introduced in 1975 by Harvard dermatologist Thomas B. Fitzpatrick to describe sun tanning behavior.[2]

The von Luschan scale was used extensively throughout the first half of the 20th century in race studies and anthropometry. However, the results were inconsistent: in many instances, different investigators would give different readings of the same person. The von Luschan scale was largely abandoned by the early 1950s, replaced with methods utilizing reflectance spectrophotometry.