The Eastern Market in Washington, D.C. was damaged by a three-alarm fire in 2007[1] 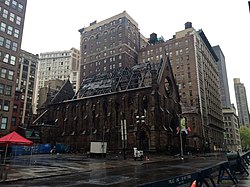 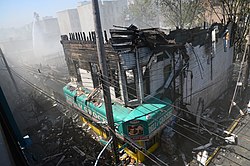 One-alarm fires, two-alarm fires, three-alarm fires, etc., are categories classifying the seriousness of fires, commonly used in the United States and in Canada , particularly indicating the level of response by local authorities. The term multiple-alarm is a quick way of indicating that a fire is severe and is difficult to contain. This system of classification is used by both fire departments and news agencies.[4]

In terms of understanding the relative severity of an incident, the government of Rochester, New Hampshire has reported in a statement that a "typical fire in a small structure will usually require only one or two alarms". In contrast, however, a "large-scale fire in a commercial building would require three alarms or more."[5]

When identifying the unit/firefighter alarm designation, the initial dispatch is referred to as a "first alarm" and is typically the largest. Subsequent alarms are calls for additional units, usually because the fire has grown and additional resources are needed to combat it, or because the incident is persisting long enough that firefighters on scene need to be relieved.[6]

Requests for units and firefighters from outside jurisdictions do not normally occur in multi-firehouse urban areas until elevated alarms are reached (alarm three and above), but will depend on the location of the incident and the condition of the authority having jurisdiction at the time of the incident.

A common misconception is that a "three-alarm fire", for example, means that three firehouses responded to the fire. This is not the rule behind the naming convention, although some cities may use the number of firehouses responding for multi-alarm designations because that is the simplest way to determine an alarm number.[4][7]

The list is a basic example of how alarm levels are categorized in a fire department, how many fire apparatus or fire units respond to each alarm level, etc. In New York, however, additional special alarm levels are utilized, aside from the conventional first alarm fire, second alarm fire, third alarm fire, etc. Examples of such alarm levels are the signal 10-75 assignment, the signals 10-76 and 10-77 assignments, and the signal 10-60 assignment. A 10-75 is a working fire (i.e., there is fire visible from a building), the 10-76/10-77 assignments are the alarm levels separate from the first alarm, second alarm, third alarms, etc. that are the standard fire department responses to fires in high-rise buildings. The signal 10-60 is a separate response to major disasters. Engine companies, ladder companies, rescue companies, etc. respond to these disasters. Some units can act as Firefighter Assist and Search Team (FAST) units. Chief units who respond to these incidents include division chief units, deputy chief units, battalion chief units (safety, SOC, field communications), air recon chief units, etc.

The list demonstrates how alarm levels are categorized in order per protocol. Each apparatus count is in an addition on each alarm (a five alarm fire assignment has 21 engine companies total). Each total is the total number of units on scene.[11]

If the incident commander decides that the incident does not require a higher alarm level to be requested, they can specially request an additional unit to the scene without requesting a full alarm level assignment. For example, at a working fire, there are four engine companies, three ladder companies, one squad company, one rescue company, two battalion chief units, and one division chief unit operating at the scene. If the fire is not large enough to require a 2nd alarm, but there is a need for more equipment and manpower, the commanding chief can request additional units to respond "specially called" to the scene.

The system of classification comes from the old tradition of using pull stations to alert the local departments to a fire in their area.[4] The "box" would send a message to all local stations by telegraph that there was a fire, indicating the intensity by number. A firefighter could consult a codebook and use a system like Morse code to send messages back requesting for more help. For example, a code commonly used throughout the US was four rings, a pause, and another four rings (known to fire alarm specialists as "Code 4-4" or simply "4-4") to indicate a particularly intense fire, giving rise to the phrase "four alarm fire".[4]