The oldest known scheme of classifying instruments is China and dates from the 3rd millennium BC. It grouped instruments according to the materials they are made of. Instruments made of stone were in one group, those of wood in another, those of silk are in a third, and those of bamboo in a fourth, as recorded in the Yo Chi (record of ritual music and dance), compiled from sources of the Chou period (9th-5th centuries BC) and corresponding to the four seasons and four winds.[1][2]

The eight-fold system of pa yin (八音 "eight sounds", "octave"), from the same source, occurred gradually, and in the legendary Emperor Zhun's time (3rd millennium BC) it is believed to have been presented in the following order: metal (chin), stone (shih), silk (ssu), bamboo (che), gourd (piao), clay (t'u), leather (hoes), and wood (mutt) classes, and it correlated to the eight seasons and eight winds of Chinese culture, autumn and west, autumn-winter and NW, summer and south, spring and east, winter-spring and NE, summer-autumn and SW, winter and north, and spring-summer and SE, respectively.[1]

However, the Chou-Li (Rites of Chou), an anonymous treatise compiled from earlier sources in about the 2nd century BC, had the following order: metal, stone, clay, leather, silk, wood, gourd, and bamboo. The same order was presented in the Tso Chuan (Commentary of Tso), attributed to Tso Chiu-Ming, probably compiled in the 4th century BC.[1]

Much later, Ming dynasty (14th-17th century) scholar Chu Tsai Yu recognized three groups: those instruments using muscle power or used for musical accompaniment, those that are blown, and those that are rhythmic, a scheme which was probably the first scholarly attempt, while the earlier ones were traditional, folk taxonomies.[3]

More usually, instruments are classified according to how the sound is initially produced (regardless of post-processing, i.e., an electric guitar is still a string-instrument regardless of what analog or digital/computational post-processing effects pedals may be used with it).

The modern system divides instruments into wind, strings and percussion. It is of Ancient Greece origin (in the Hellenistic period, prominent proponents being Nicomachus and Porphyry). The scheme was later expanded by Martin Agricola, who distinguished plucked string instruments, such as guitars, from bowed string instruments, such as violins. Classical musicians today do not always maintain this division (although plucked strings are grouped separately from bowed strings in sheet music), but distinguish between wind instruments with a reed (woodwinds) and those where the air is set in motion directly by the lips (brass instruments).

Many instruments do not fit very neatly into this scheme. The serpent, for example, ought to be classified as a brass instrument, as a column of air is set in motion by the lips. However, it looks more like a woodwind instrument, and is closer to one in many ways, having finger-holes to control pitch, rather than valves.

It might be said that with these extra categories, the classical system of instrument classification focuses less on the fundamental way in which instruments produce sound, and more on the technique required to play them.

Various names have been assigned to these three traditional Western groupings:[1]:136–138, 157, notes for Chapter 10

Victor-Charles Mahillon later adopted a system very similar to this. He was the curator of the musical instrument collection of the conservatoire in Brussels, and for the 1888 catalogue of the collection divided instruments into four groups: strings, winds, drums, and other percussion. This scheme was later taken up by Erich von Hornbostel and Curt Sachs who published an extensive new scheme for classication in Zeitschrift für Ethnologie in 1914. Their scheme is widely used today, and is most often known as the Hornbostel–Sachs system (or the Sachs–Hornbostel system).

In the Hornbostel–Sachs classification of musical instruments, lamellophones are considered plucked idiophones, a category that includes various forms of jaw harp and the European mechanical music box, as well as the huge variety of African and Afro-Latin thumb pianos such as the mbira and marimbula.

Later Sachs added a fifth category, electrophones, such as theremins, which produce sound by electronic means.[4] Modern synthesizers and electronic instruments fall in this category. Within each category are many subgroups. The system has been criticised and revised over the years, but remains widely used by ethnomusicologists and organologists.

One notable example of this criticism is that there is care to be taken with electrophones, as some electronic instruments like the electric guitar (chordophone) and some electronic keyboards (sometimes idiophones or chordophones) can produce music without electricity or the use of an amplifier.

Schaeffner's system has only two top-level categories which he denoted by Roman numerals:

The system agrees with Mahillon and Hornbostel–Sachs for chordophones, but groups percussion instruments differently.

The Kpelle of West Africa also use this system. They distinguish the struck (yàle), including both beaten and plucked, and the blown (fêe).[1][5] The yàle group is subdivided into five categories: instruments possessing lamellas (the sanzas); those possessing strings; those possessing a membrane (various drums); hollow wooden, iron, or bottle containers; and various rattles and bells. The Hausa, also of West Africa, classify drummers into those who beat drums and those who beat (pluck) strings (the other four player classes are blowers, singers, acclaimers, and talkers),[6] Kartomi does not specify if these two classifications pre-date Schaeffner or Pollux. The concept, the way the person produces the sound, is human-centered, which is part of their traditional culture so presumably they at least pre-date Schaeffner.

Another similar system is the five-class, physics-based organology that was presented by Steve Mann in 2007,[8] comprises Gaiaphones (Chordophones, Membranophones, and Idiophones), Hydraulophones, Aerophones, Plasmaphones, and Quintephones (electrically and optically produced music), the names referring to the five essences, earth, water, wind, fire and the quintessence, thus adding three new categories to the Schaeffner taxonomy.

Elementary organology, also known as physical organology, is a classification scheme based on the elements (i.e. states of matter) in which sound production takes place.[9][10] "Elementary" refers both to "element" (state of matter) and to something that is fundamental or innate (physical).[11][12] The elementary organology map can be traced to Kartomi, Schaeffner, Yamaguchi, and others,[11] as well as to the Greek and Roman concepts of elementary classification of all objects, not just musical instruments.[11] 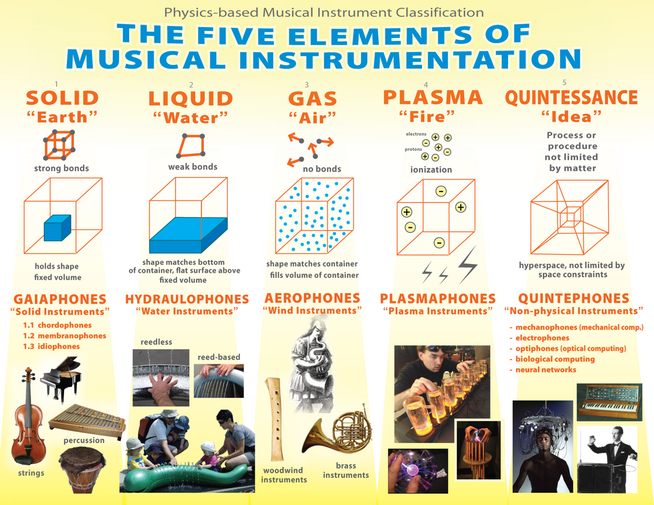 Instruments can be classified by their musical range in comparison with other instruments in the same family. These terms are named after singing voice classifications:

Some instruments fall into more than one category: for example, the cello may be considered either tenor or bass, depending on how its music fits into the ensemble, and the trombone may be alto, tenor, or bass and the French horn, bass, baritone, tenor, or alto, depending on which range it is played. In a typical concert band setting, the first alto saxophone covers soprano parts, while the second alto saxophone covers alto parts.

Instruments can be categorized according to a common use, such as signal instruments, a category that may include instruments in different Hornbostel–Sachs categories such as trumpets, drums, and gongs. An example based on this criterion is Bonanni (e.g., festive, military, and religious).[1] He separately classified them according to geography and era.

Instruments can be classified according to the ensemble in which they play, or the role they play in the ensemble. For example, the horn section in popular music typically includes both brass instruments and woodwind instruments. The symphony orchestra typically has the strings in the front, the woodwinds in the middle, and the basses, brass, and percussion in the back.

Classifications done for the Indonesian ensemble, the gamelan, were done by Jaap Kunst (1949), Martopangrawit, Poerbapangrawit, and Sumarsam (all in 1984).[1] Kunst described five categories: nuclear theme (cantus firmus in Latin and balungan ("skeletal ramework") in Indonesian); colotomic ( a word invented by Kunst) (interpunctuating), the gongs; countermelodic; paraphrasing (panerusan), subdivided as close to the nuclear theme and ornamental filling; agogic (tempo-regulating), drums.

R. Ng. Martopangrawit has two categories, irama (the rhythm instruments) and lagu (the melodic instruments), the former corresponds to Kunst's classes 2 and 5, and the latter to Kunst's 1, 3, and 4.

The gamelan is also divided into front, middle, and back, much like the symphony orchestra.

An orally-transmitted Javanese taxonomy has 8 groupings:[1]

A Javanese classification transmitted in literary form is as follows:[1]

This is much like the pa yin. It is suspected of being old but its age is unknown.

Minangkabau musicians (of West Sumatra) use the following taxonomy for bunyi-bunyian ("objects that sound"): dipukua ("beaten"), dipupuik ("blown), dipatiek ("plucked"), ditariek ("pulled"), digesek ("bowed"), dipusiang ("swung"). The last one is for the bull-roarer. They also distinguish instruments on the basis of origin because of sociohistorical contacts, and recognize three categories: Mindangkabau (Minangkabau asli), Arabic (asal Arab), and Western (asal Barat), each of these divided up according to the five categories. Classifying musical instruments on the basis sociohistorical factors as well as mode of sound production is common in Indonesia.[1]

In West Africa, tribes such as the Dan, Gio, Kpelle, Hausa, Akan, and Dogon, use a human-centered system. It derives from 4 myth-based parameters: the musical instrument's nonhuman owner (spirit, mask, sorcerer, or animal), the mode of transmission to the human realm (by gift, exchange, contract, or removal), the making of the instrument by a human (according to instructions from a nonhuman, for instance), and the first human owner. Most instruments are said to have a nonhuman origin, but some are believed invented by humans, e.g., the xylophone and the lamellophone.[1]

In 1960, German musicologist Kurt Reinhard presented a stylistic taxonomy, as opposed to a morphological one, with two divisions determined by either single or multiple voiced playing.[1] Each of these two divisions was subdivided according to pitch changeability (not changeable, freely changeable, and changeable by fixed intervals), and also by tonal continuity (discontinuous (as the marimba and drums) and continuous (the friction instruments (including bowed) and the winds), making 12 categories. He also proposed classification according to whether or not they had dynamic tonal variability, a characteristic that separates whole eras (e.g., the baroque from the classical) as in the transition from the terraced dynamics of the harpsichord to the crescendo of the piano, grading by degree of absolute loudness, timbral spectra, tunability, and degree of resonance.

Al-Farabi, Persian scholar of the 10th century, also distinguished tonal duration. In one of his four schemes, in his two-volume Kitab al-Musiki al-Kabir (Great Book of Music) he identified five classes, in order of ranking, as follows: the human voice, the bowed strings (the rebab) and winds, plucked strings, percussion, and dance, the first three pointed out as having continuous tone.

Ibn Sina, Persian scholar of the 11th century, presented a scheme in his Kitab al-Najat (Book of the Delivery), made the same distinction. He used two classes. In his Kitab al-Shifa (Book of Soul Healing), he proposed another taxonomy, of five classes: fretted instruments, unfretted (open) stringed, lyres and harps, bowed stringed, wind (reeds and some other woodwinds, such as the flute and bagpipe), other wind instruments such as the organ, and the stick-struck santur (a board zither). The distinction between fretted and open was in classic Persian fashion.