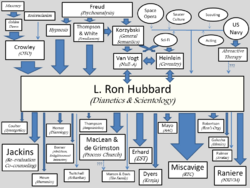 The Advanced Ability Center was a breakaway organization from the Church of Scientology established by former Scientologist David Mayo after he left the Church in February 1983 – a time when most of Scientology's upper and middle management was removed following the formation of the Religious Technology Center (RTC) and RTC head David Miscavige's restructuring of the church.[1] David Mayo had been Hubbard's own auditor.[1] The Advanced Ability Center later became the Theta International movement[2] and was also known as the Church of the New Civilization.[3]