Ancient Mithila University was an ancient university and was famous for Nyaya Shastra and logical sciences. 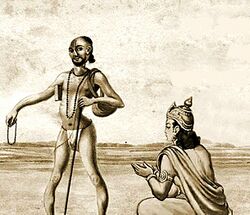 It was gradually started from the philosophical conferences held by Janaka, the king of Mithila at his court. These philosophical conferences led to the formation of a seat of learning and this seat of learning converted into the university of Mithila. It was the prominent seat of Brahmanical system of education.[1][2][3][4][5][6][7] Mithila is the seat of Maithil Brahmin. From ancient times, Maithil Brahmins had given different dimensions to the ancient Indian Philosophy. Nyaya Shastra, Tarka Shastra, Mimansa and Shankhya Shastra were mostly emerged from Mithila.[8][9] Uddalaka Aruni discovered the theory of three elements of the life. Ashtavakra taught King Janaka the metaphysical nature of existence and the meaning of individual freedom. The philosophical conversation between Ashtavakra and Janaka is recorded as ancient philosophical texts known as Ashtavakra Gita or Ashtavakra Samhita.[10] Similarly Yajnavalkya taught Brahman Vidya to the King Janaka.[11] Yajnavalkya is the author of Satapatha Brahman and is considered as the Father of Indian philosophy. Gargi Vachaknavi was a Brahmavadini. She composed several hymns in the Rig Veda that questioned the origin of all existence. She was honoured as one of the Navaratnas (nine gems) in the court of King Janaka of Mithila. She took part in the Shastrarth with Yajnavalkya, in which she asked some questions related to the foundation of the existence of the nature. Yajnavalkya answered all her questions.[12] Maitreyi was another Brahmavadini who lived during the later Vedic period in ancient India. She is mentioned in the Brihadaranyaka Upanishad as one of two wives of the Vedic sage Yajnavalkya. She was Advaita philosopher. In the Rigveda about ten hymns are attributed to Maitreyi. She explores the Hindu concept of Atman (soul or self) in a dialogue contained in the Brihadaranyaka Upanishad. The dialogue, also called the Maitreyi-Yajnavalkya dialogue, states that love is driven by a person's soul, and it discusses the nature of Atman and Brahman and their unity, the core of Advaita philosophy. She is estimated to have lived around the 8th century BCE. Aksapada Gautama founded Nyaya Shastra. Mandana Mishra (8th century CE) was a Hindu philosopher who wrote on the Mīmāṁsā and Advaita systems of thought. He was a follower of the Karma Mimamsa school of philosophy and a staunch defender of the holistic sphota doctrine of language. He was a contemporary of Adi Shankara. Maṇḍana Miśra is known to be a student of a mimamsa scholar Kumarila Bhatta, but who also wrote a work on Advaita, the Brahma-siddhi. He is best known as the author of the Brahmasiddhi. In the 9th to 10th century, Vācaspati Miśra was philosopher of Advaita Vedanta and wrote one non-commentary, Tattvabindu, or Drop of Truth, which focuses on Mīmāṃsā theories of sentence meaning. In the 14th century, Vidyapati emerged as Maithili and Sanskrit poet, composer, writer, courtier and royal priest in Mithila. He was a devotee of Shiva, but also wrote love songs and devotional Vaishnava songs. He knew Sanskrit, Prakrit, Apabhramsha, and Maithili.[13][14][15] 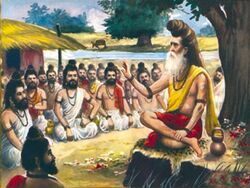 This university was very famous for its Nyaya Shastra. Nyaya Shastra was founded by Aksapada Gautama. It was later developed by Gangeśa Upadhyay. From 12th century to 15th century, it was important center for learning and cultures.[16] In Kamesvara period Jagaddhara was a scholar, who wrote commentaries on a variety of subjects, such as the Gita, Devimahatmya, Meghaduta, Gita Govinda and Malati Madhava and others as well as wrote original treatises on erotics such as Rasika Sarvasva, Sangita Sarvasva. Similarly Sankara Misra was another scholar who worked on the Vaisheshika, the Nyaya and the Smrti.[17] Vasudeva Sarvabhauma, the famous logician of Nadia, received his education at Mithila in the 15th century. In the 15th century, Raghunath Siromani, was the head of the university. At that time this university was also known as Mithila Vidyapeeth.[18] According to the scholars and historians of Maharajadhiraja Lakshmishwar Singh Museum and Maithili Sahitya Sansthan, the university of Nalanda and Vikramshila were destroyed by Mughal Emperors because these universities were organised at particular places. But to destroyed the university of ancient Mithila was not so easy because it was spread out in many Ashram or Gurukul of the different ancient philosophers or sages of Mithila. So this university remained till the 20th century.[19] According to Abul Fazal during the reign of Shah Jahan, Mithila became famous for its scholars and poets who received rewards from the Emperor for their scholarship. In the 16th century, Mithila emerged as the chief centre of both secular and religious learning. Sanskrit scholars from different parts of India came to Mithila to study Hindu Philosophy.[20][21] In Mughal period, Raghunandan Dasa was an eminent intellectual of the university. Mughal Emperor Akbar was very influenced by him, so he gifted him the entire Mithila as a gift. But Raghunandan Dasa later offered it to his Guru Mahesh Thakur as Guru Dakshina. Mahesh Thakur established Darbhanga Raj Kingdom on the day of Ram Navami in 1557 AD.

The name of the examination of this university was known as 'Salaka Pariksha'. It was examined by Dvara-Panditas (who were considered the most learned and revered of the scholars at that time) .[22] In this examination candidate have to explain the portion of the page in a manuscript which is pierced by a needle. This examination was for candidates to complete graduation certificate. There was more tough level of examination than Salaka Pariksha in which candidate is required to present himself in the examination by the public. This latter examination was known as ‘Sadayantra’. The scholar or candidate in this examination could be asked to any question on any topic by the people they liked. After passing this Sadayantra test, scholars were honoured by three different classifications Upadhaya, Mahopadhaya and Mahamahopadhaya according to the level of knowledge. These honours were much coveted among the scholars.[3]

Scholars and teachers of Mithila

In Mithila there were a lots of scholars and teachers who flourished educational system in the Kingdom. Following are some of the list of them. 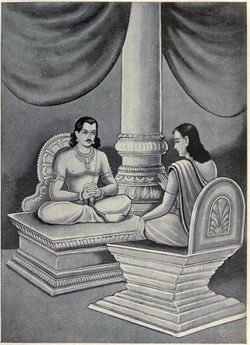 Astrology and Astronomy in Mithila 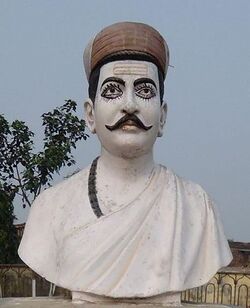 Chandeshvara Thakur wrote Rajnītiratnākāra in the second half of the thirteen century under the patronage of the Karnata king. He was the most renowned political thinker of Mithila. Rajnītiratnākāra is the oldest work on the subject of state affairs and politics in Mithila. Similarly Jyotishwara Thakur wrote Varnā-Ratnākāra. He had given detailed description about eighty four types of kingly qualities and use of thirty six kinds of weapons in which a competent king must be skilled. He has given a long list of administrative officers and also vividly describes the court life and its decorum. Misaru Mishra wrote Vīvādachandra. Vidyapati wrote Bībhāgasāra. In Bībhāgasāra, Vidyapati strongly supports monarchy and he believes that the king is the main source of all law. Similarly Vardhamana wrote Dandavīveka and Vacaspati Mishra wrote Vyāvāharāchīntāmani. These are well-marked works on the law, administrative matters and justice as such they are important for the study of contemporary polity.[9]

Gangesa Upadhyay of Mithila and Raghunatha Shiromani of Nabadwip developed a new version of Nyaya Shastra known as Navya Nyaya School of Indian Philosophy to combat with the logic of Buddhism Philosophy and to defeat them to minimise Buddhism influence. They established a new university for Hindu philosophy at Nabadwip(Nadia district) known as Nabadwip University or Nadia University.[27][28] Vasudeva Sarvabhauma was once prevented from copying the texts of Mithila University, then he committed to memorize the whole parts of Tattav Chintamani and the metrical part of Kusumanjali. He then wrote down the texts at Nadia, which he memorized and helped in establishment of the new university at Nadia. Mahamahopadhyaya Gokulnath (1650-1750) was the scholar of Mithila migrated to Nadia to contribute in the establishment of new school of logic known as ‘Navya Nyaya’. This led to the decline of the reputation and importance of Mithila. From here Nadia emerged as second center of learning of Hindu Philosophy.