BRAC, an international development organisation based in Bangladesh, is the largest non-governmental development organisation in the world, in terms of number of employees as of September 2016.[4][5][6] Established by Sir Fazle Hasan Abed in 1972 after the independence of Bangladesh, BRAC is present in all 64 districts of Bangladesh as well as 13 other countries in Asia, Africa, and the Americas.[citation needed]

BRAC states that it employs over 100,000 people, roughly 70 percent of whom are women, and that it reaches more than 126 million people with its services.[7][non-primary source needed][8] The organisation is partly self-funded through a number of social enterprises that include a dairy and food project, a chain of retail handicraft stores called Aarong, seed and Agro[clarification needed], and chicken. BRAC has operations in 14 countries of the world.[7][non-primary source needed] 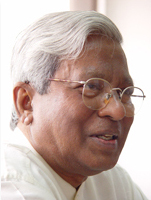 Known formerly as the Bangladesh Rehabilitation Assistance Committee, then as the Bangladesh Rural Advancement Committee, and later as Building Resources Across Communities,[9] BRAC was initiated in 1972 by Sir Fazlé Hasan Abed at Shallah Upazillah in the district of Sunamganj as a small-scale relief and rehabilitation project to help returning war refugees after the Bangladesh Liberation War of 1971.[10] 14 thousand homes had to be rebuilt as part of the relief effort, as well as several hundred fishing boats; BRAC claims to have done this within nine months, as well as opening medical centres and providing other essential services.[11][non-primary source needed]

Until the mid-1970s, BRAC concentrated on community development through village development programmes that included agriculture, fisheries, cooperatives, rural crafts, adult literacy, health and family planning, vocational training for women and construction of community centres. A Research and Evaluation Division (RED) was set up to evaluate its activities and decide direction, and in 1977, BRAC began taking a more targeted approach by creating Village Organisations (VO) to assist the landless, small farmers, artisans, and vulnerable women. That same year BRAC set up a commercial printing press to help finance its activities. The handicraft retail chain called Aarong, was established the following year.[12]

In 1979, BRAC entered the health field by establishing a nationwide Oral Therapy Extension Programme (OTEP), a campaign to combat diarrhoea, the leading cause of the high child mortality rate in Bangladesh.[13][page needed] Non Formal Primary Education was started by BRAC in 1985.[14]

BRAC has done what few others have – they have achieved success on a massive scale, bringing life-saving health programs to millions of the world's poorest people. They remind us that even the most intractable health problems are solvable, and inspire us to match their success throughout the developing world.

Microfinance, introduced in 1974, is BRAC's oldest programme. It spans all districts of Bangladesh.[16][17] It provides collateral-free loans to mostly poor, landless, rural women, enabling them to generate income and improve their standards of living.[16][17] BRAC's microcredit program has funded over $1.9 billion in loans in its first 40 years.[citation needed] 95% of BRACs microloan customers are women.[18] According to BRAC, the repayment rate is over 98%.[19]. BRAC started community empowerment programme back in 1988 all over the country.

BRAC's education programme provides non-formal primary education to those left out of the formal education system, especially poor, rural, or disadvantaged children, and drop-outs.[18] Its schools are typically one room with one teacher and no more than 33 students. Core subjects include mathematics, social studies and English. The schools also offer extracurricular activities.[20] They incentivise schooling by providing food, allowing flexible learning hours, and conferring scholarships contingent on academic performance.[21]

Bangladesh has reduced the gap between male and female attendance in schools.[21] The improvement in female enrollment, which has largely been at the primary level, is in part attributable to BRAC.[20] Roughly 60% of the students in their schools are girls.[18]

BRAC started providing public healthcare in 1972 with an initial focus on curative care through paramedics and a self-financing health insurance scheme. The programme went on to offer integrated health care services.[citation needed] 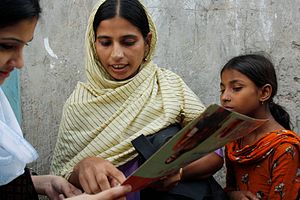 A BRAC community health worker conducting a survey in the Korail slum, Bangladesh

BRAC's 2007 impact assessment of its North West Microfinance Expansion Project testified to increased awareness of legal issues, including those of marriage and divorce, among women participants in BRAC programs. Furthermore, women participants' self-confidence was boosted and incidence of domestic violence were found to have declined.[22] One of the most prominent forms of violence against women, acid throwing, has been decreasing by 15-20% annually since the enactment in 2002 of legislation specifically targeting acid violence.[23]

BRAC conducted one of the largest NGO responses to Cyclone Sidr which hit vast areas of the south-western coast in Bangladesh in mid-November 2007.[citation needed] BRAC distributed emergency relief materials, including food and clothing, to over 900,000 survivors, provided medical care to over 60,000 victims and secured safe supplies of drinking water. BRAC is now focusing on long-term rehabilitation, which will include agriculture support, infrastructure reconstruction and livelihood regeneration.[24][non-primary source needed]

Partnership with the Nike Foundation

BRAC has a collaboration with Nike's Girl Effect campaign to launch a new program to reach out to teenagers in Uganda and Tanzania.[25][non-primary source needed]

In 2011 the Bill and Melinda Gates Foundation (BMGF) joined the list of BRAC donors.

In 2012 the Department for International Development (DFID), Government of the UK and Department of Foreign Affairs and Trade (DFAT), and Australian Government (SPA) (under the strategic partnership arrangement) became BRAC donors as well. [26]