The Communications and Information Services Corps (CIS) (Irish: An Cór Seirbhísí Cumarsáide agus Eolais) – formerly the Army Corps of Signals – is one of the combat support corps of the Irish Defence Forces, the military of Ireland. It is responsible for the installation, maintenance and operation of communications and information systems for the command, control and administration of the Defence Forces, and the facilitation of accurate, real-time sharing of intelligence between the Army, Naval Service and Air Corps branches at home and overseas.[1]

The CIS Corps is headquartered at McKee Barracks, Dublin, and comes under the command of an officer of Colonel rank, known as the Director of CIS Corps.[2] 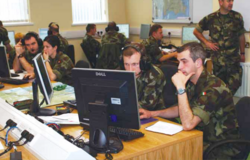 Members of the Defence Forces CIS at the Curragh Camp, County Kildare

Formerly the Army Corps of Signals, the Communications and Information Services Corps is responsible for the development and operation of Information Technology and Telecommunications systems in support of Defence Forces tasks. It is also responsible for coordinating all communications – radio and line – and information systems, communications research and updating of communications in line with modern developments and operational requirements. The CIS Corps are tasked with utilising networking and information technologies in order to dramatically increase Defence Force operational effectiveness through the provision of timely and accurate information to the appropriate commander, along with the real time efficient sharing of information and intelligence with the Army, Naval Service and Air Corps, as well as with multinational partners involved in international peacekeeping and other actors as required.[1]

The CIS Corps collar flash features the angel Gabriel, the messenger of God, behind a signal shield and the caption "Cór Comharthaíochta". This is the Irish translation for 'Signals Corps', while the translation for Communications and Information Services Corps is "An Cór Seirbhísí Cumarsáide agus Eolais".[3]

The Communications and Information Services (CIS) Corps works with the Defence Forces intelligence branch, the Directorate of Military Intelligence (J2), with regards to signals intelligence (SIGINT), and houses a dedicated SIGINT element within the Corps. The DF CIS Corps has the ability to intercept and monitor communications, remotely collect data, and process it.[4] Under Irish legislation, the Criminal Justice (Surveillance) Act 2009 and Interception of Postal Packets and Telecommunications Messages (Regulation) Act 1993 provides the Defence Forces with the legal authority to conduct domestic intelligence operations involving espionage, electronic communications and stored electronic information in order to safeguard and maintain the security of the state.[5]

The CIS Corps along with the Garda Síochána, the national police force, provide a significant domestic support role to the National Cyber Security Centre (NCSC) of the Department of Communications, Climate Action and Environment in countering cyber-attacks, protecting critical national infrastructure and securing government communications.[6][7] CIS is responsible for cyber security within the Defence Forces, and maintains a capability in that area for the purpose of protecting its own networks and users domestic and foreign.[8] In 2016 the establishment of the Computer Incident Response Team (CIRT) in DFHQ CIS Company was revealed.[9]

In July 2015, leaked email correspondence from Hacking Team – a private Italian spying and eavesdropping software company – reportedly showed members of the Irish CIS Corps in discussions with the company to purchase intrusion and surveillance "solutions" for the lawful interception of online communications, such as monitoring incoming and outgoing emails, browsing activity, Skype calls, remotely switching on webcams and microphones and remotely taking control of devices.[10][11] A Defence Forces spokesperson said that for operational security reasons it could not comment on specific elements of the activities of the CIS Corps, but confirmed that no goods or services were purchased from the company in question.[12][13]

The CIS Corps deployed 'ethical hackers' to fight back against the Health Service Executive ransomware attack in mid-2021, and sent CIS personnel to hospitals and HSE offices in order to decrypt devices affected by the cyberattack onsite. Reservists were particularly useful to this effort due to their cybersecurity skills and experienced gleaned from the private sector.[14][15] 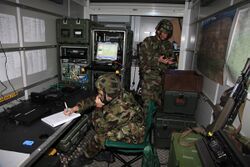 Soldiers join the Communications and Information Services Corps in one of the following apprenticeship trades;

All personnel do their basic military training.

The CIS School runs a large number of CIS related courses, including a degree programme in Military Communications for CIS technicians in association with the Institute of Technology, Carlow.[16]

There are 3 sections to the CIS School, providing training in the areas of operational procedures, technical proficiency and simulation.

The DIRT range is a digital indoor shooting range in which trainees can be assessed on their marksmanship skills for the various small arms weapons used by the DF. It helps develop these proficiencies methodically without firing live ammunition on a regular basis.[16] The €1 million facility is based at the Department of Defence properties at Kilworth Camp, County Cork.[17]