The Eastern Mediterranean University (EMU; Turkish: Doğu Akdeniz Üniversitesi) is a public university in Northern Cyprus. It was established in 1979 under the leadership of Onay Fadıl Demirciler (then Undersecretary of the Ministry of Education)[1] as a higher-education institution of technology for Turkish Cypriots. In 1986, it was converted to a state university. The campus is located within the city of Famagusta. 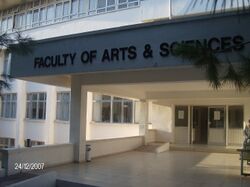 The university has 141 programs (11 Faculties and 5 Schools) offering undergraduate and postgraduate degrees, as well as a research infrastructure. The languages of instructions are Turkish and English. However, an English Preparatory School is available for students who need to improve their English.[2] The university also offers a variety of sports and social activities. Academic Programs of EMU include Physical and Social Sciences with research studies via Research Advisory Board. 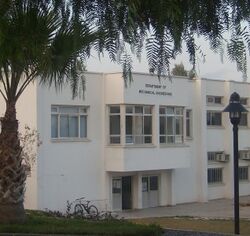 Mechanical Engineering, one of the oldest buildings in the campus

In 1986, following the TRNC Assembly's approval of the Statute establishing the North Cyprus Education Foundation and Eastern Mediterranean University (18/86), the Institute of Higher Technology was converted into a state university assuming the name of Eastern Mediterranean University. That the same year, the Faculties of Engineering, Arts and Sciences, Business and Economics and School of Computing and Technology were inaugurated. In 1990, the Faculty of Architecture and School of Tourism and Hospitality were opened. The Faculty of Law was established in 1996. The Faculty of Communication was inaugurated in 1997 and Faculty of Education in 1999. The School of Applied Sciences became operation in 2007 and in 2010, the Faculty of Health Sciences and School of Justice were established. With the inauguration of the Pharmacy Faculty in 2011, the number of Faculties offering education reached 9 and schools 4.

University is a full member of the European University Association[3] and the International Association of Universities. The university established its accreditation for Turkish students under the Council of Higher Education[4] and Turkish Cypriot higher education organisation, but retains its independent structure via its non-profit foundation.[5] 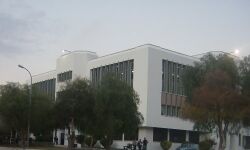 The university's library is one of the largest on the island, collection reached more than 120,000 books, and offers free access to hundreds of information databases and sources to the users. 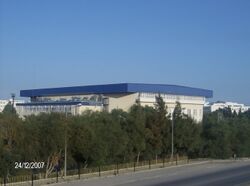 Aerial view of the indoor facility

The campus was expanded in the 1990s to include sports and social facilities.

The campus includes tennis and basketball courts as well as AstroTurf football pitches, next to an outdoor athletics stadium. Another main sports facility is the Lala Mustafa Pasha indoor sports centre, which serves as the venue for major sporting and cultural events.[6]

University owns a radio station on 106.5 FM called Radio EMU broadcasting to whole island.[7] It is run by students of the Communications department.

A North Cypriot Newspaper, Cyprus Today, published two articles in 2008, featuring allegations of mobbing and bullying at the school, particularly against foreign faculty.

In the first article, the newspaper quoted the allegations of an ex-faculty member who claimed that he was forced to resign after he was harassed, professionally sabotaged, and the victim of false allegations (of which he was later exonerated after appealing to international organizations). The School administration denied the allegations and stated that the allegations were "Utterly false and that no such thing has occurred and nothing can be substantiated". A spokesman for the Worker's union said they were not aware of that particular faculty member's situation, but had experienced similar problems concerning other faculty members.[8]

In the second article, the newspaper reported about the penalizing of a British Faculty member, who was removed from the position of department chair for undisclosed reasons. The faculty member declined to comment, as did the university administration.[9]

The university is a member of the Caucasus University Association.[13]