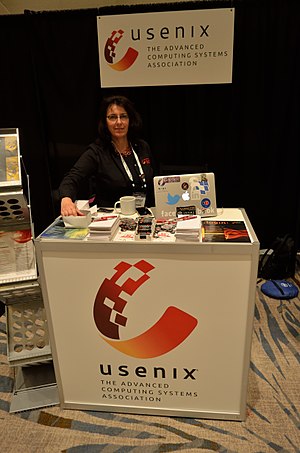 USENIX is an association that supports operating system research. It was founded in 1975 under the name "Unix Users Group," focusing primarily on the study and development of Unix and similar systems. In June 1977, a lawyer from AT&T Corporation informed the group that they could not use the word UNIX as it was a trademark of Western Electric (the manufacturing arm of AT&T until 1995), which led to the change of name to USENIX.[1] It has since grown into a respected organization among practitioners, developers, and researchers of computer operating systems more generally. Since its founding, it has published a technical journal entitled ;login:.[2]

USENIX was started as a technical organization. As commercial interest grew, a number of separate groups started in parallel, most notably the Software Tools Users Group (STUG), a technical adjunct for Unix-like tools and interface on non-Unix operating systems, and /usr/group, a commercially oriented user group.

USENIX became the first computing association to provide open access to their conference and workshop papers in 2008.[3] As of 2013[update], it remains the only one to have done so. Since 2011, they have included audio and video recordings of paper presentations in their open-access materials.

USENIX 1984 Summer speakers having some fun