Wikitongues is an American non-profit organization registered in the state of New York. It aims to document all the languages in the world.[2] It was founded by Frederico Andrade, Daniel Bogre Udell and Lindie Botes in 2014.[3][4] 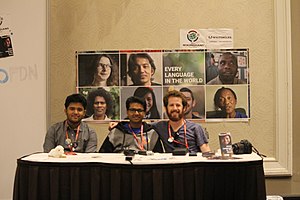 Wikitongues contributors in Montreal during Wikimania 2017.

Poly is an open source software built to share and learn languages.[7] The project was supported on Kickstarter[1] and the organization was able to raise $52,716 USD with the help of 429 backers. Currently the software is under development.[8]

All the videos are released under CC-by-NC 4.0 license. Recently, another option to release the video under CC-by-SA 4.0 has also been introduced.[9]