Title page of the 1508 edition 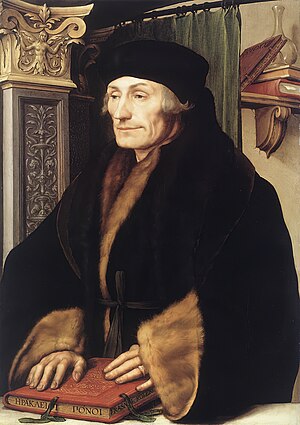 Adagia (singular adagium) is the title of an annotated collection of Greek and Latin proverbs, compiled during the Renaissance by Dutch humanist Desiderius Erasmus Roterodamus. Erasmus' collection of proverbs is "one of the most monumental ... ever assembled" (Speroni, 1964, p. 1).

The first edition, titled Collectanea Adagiorum, was published in Paris in 1500, in a slim quarto of around eight hundred entries. By 1508, after his stay in Italy, Erasmus had expanded the collection (now called Adagiorum chiliades or "Thousands of proverbs") to over 3,000 items, many accompanied by richly annotated commentaries, some of which were brief essays on political and moral topics. The work continued to expand right up to the author's death in 1536 (to a final total of 4,151 entries), confirming the fruit of Erasmus' vast reading in ancient literature.

Many of the adages have become commonplace in many European languages, and we owe our use of them to Erasmus. Equivalents in English include:

The work reflects a typical Renaissance attitude toward classical texts: to wit, that they were fit for appropriation and amplification, as expressions of a timeless wisdom first uncovered by the classical authors. It is also an expression of the contemporary humanism; the Adagia could only have happened via the developing intellectual environment in which careful attention to a broader range of classical texts produced a much fuller picture of the literature of antiquity than had been possible, or desired , in medieval Europe. In a period in which sententiæ were often marked by special fonts and footnotes in printed texts, and in which the ability to use classical wisdom to bolster modern arguments was a critical part of scholarly and even political discourse, it is not surprising that Erasmus' Adagia was among the most popular volumes of the century.