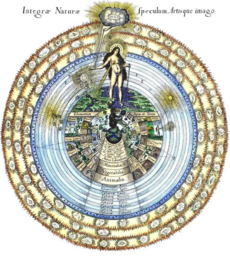 Illustration of the correspondences between all parts of the created cosmos, with the anima mundi depicted as a woman, from the Utriusque cosmi maioris scilicet et minoris metaphysica, physica atque technica historia by Robert Fludd

The anima mundi (Greek: ψυχὴ κόσμου, psychè kósmou) or world soul is, according to several systems of thought, an intrinsic connection between all living beings, which relates to the world in much the same way as the soul is connected to the human body.

Although the concept of the anima mundi originated in classical antiquity, similar ideas can be found in the thoughts of later European philosophers such as those of Baruch Spinoza, Gottfried Leibniz, Immanuel Kant, Friedrich Schelling, and Georg W.F. Hegel (particularly in his concept of Weltgeist).

Plato adhered to this idea,[1] identifying the universe as a living being:

Thus, then, in accordance with the likely account, we must declare that this Cosmos has verily come into existence as a Living Creature endowed with soul and reason [...] a Living Creature, one and visible, containing within itself all the living creatures which are by nature akin to itself.
—Plato, Timaeus 30b–d, translated by W.R.M. Lamb[2]

Plato's Timaeus describes this living cosmos as being built by the demiurge[3] constructed as to be self-identical and intelligible to reason,[4] according to a rational pattern expressed in mathematical principles and Pythagorean ratios describing the structure of the cosmos, and particularly the motions of the seven classical planets.[5]

Following Plato, the anima mundi became an important component in Neoplatonic cosmology, often including its close relationship to the demiurge and the seven planets.

The Stoics believed it to be the only vital force in the universe.

The anima mundi was borrowed from Platonist philosophy into several Gnostic sects.

In Manichaeism, the anima mundi was also called the Light Soul and the Living Soul (Middle Persian: grīw zīndag‎), contrasting it with matter, which was associated with lifelessness and death and within which the anima mundi was imprisoned.[6] The anima mundi was personified as the Suffering Jesus (Jesus patibilis) who, like the historical Jesus, was depicted as being crucified in the world.[7][8] This mystica cruxificio was present in all parts of the world, including the skies, soil, and trees, as expressed in the Coptic Manichaean psalms.[9]

In Mandaeism, the anima mundi has various parallels with mana.

The concept of the anima mundi is present in the works of hermetic philosophers like Paracelsus and Robert Fludd.

In Jewish mysticism, a parallel concept is that of Chokhmah Ila'ah, which is the all-encompassing Supernal Wisdom that transcends, orders, and vitalises all of creation. Rabbi Nachman of Breslov states that this sublime wisdom may be apprehended by a perfect tzaddik (righteous man).[10] Thus, the tzaddik attains cosmic consciousness and thus is empowered to mitigate all division and conflict within creation.

Similar concepts in eastern philosophy include the brahman, purusha, and paramatman of Hinduism, and qi in the Chinese School of Naturalists, Taoism, and Neo-Confucianism.