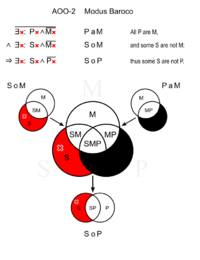 Diagram of a Baroco syllogism

In Aristotelian logic, baroco is a mnemonic word used to memorize a syllogism. Specifically, it has the first proposition universal and affirmative, but the second and third particular and negative, and the middle term the attribute in the two first. For example,

A modern example of a Baroco syllogism is:

In the 16th century the term Baroco moved beyond philosophy and began to be used to describe anything that was overly and absurdly complex. The French philosopher Michel de Montaigne associated the term 'baroco' with "Bizarre and uselessly complicated."[1] Other early sources associated the term with magic, complexity, confusion, and excess. [2]

In the 18th century, the term was sometimes also used to describe music, and was not flattering. In an anonymous satirical review of the première of Jean-Philippe Rameau's Hippolyte et Aricie in October 1733, which was printed in the Mercure de France in May 1734, the critic wrote that the novelty in this opera was "du barocque", complaining that the music lacked coherent melody, was unsparing with dissonances, constantly changed key and meter, and speedily ran through every compositional device.[3]

In 1762, Le Dictionnaire de l'Académie française wrote that the term could be used figuratively to describe something "irregular, bizarre or unequal."[4]

Jean-Jacques Rousseau, who was a musician and composer as well as philosopher, wrote in 1768 in the Encyclopédie: "Baroque music is that in which the harmony is confused, and loaded with modulations and dissonances. The singing is harsh and unnatural, the intonation difficult, and the movement limited. It appears that term comes from the word 'baroco' used by logicians."[5][1]