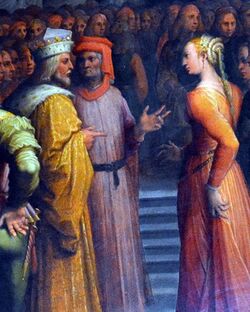 Gualdrada refuses to kiss emperor Otto IV. (Detail of a painting in Palazzo Vecchio in Florence)

Gualdrada was a member of the nobility in 12th century Florence, Italy. She was a daughter of Bellincion Berti,[1] being a descendant of the Ravignani family, a branch of the Adimari family.

Giovanni Boccaccio's On Famous Women (De mulieribus claris) biography 103 tells her twelfth century story. During a festival in a Florentine Church of Saint John the Baptist, the Holy Roman Emperor Otto IV came to the city and entered the church with his entourage. From his seat he spotted Gualdrada and was impressed with her beauty. He admired her innocence in youth, the way she dressed, and her personality. He asked an elderly gentleman that was near him,

Who, pray tell, is that girl there facing us with the beautiful face that in my opinion surpasses all the others in dignity?

The emperor did not know that he was asking her father. Bellincion answered the emperor, saying,

Your Majesty, whoever she may be, she will kiss you at my bidding if you desire.

Gualdrada overheard this and was embarrassed and wished that her father would not be so bold with his offers. She immediately replied,

Father, please stop. Speak no more. For by Heaven, unless force is used, absolutely no one except the man to whom you will give me in lawful and holy matrimony shall receive what you are offering so freely.

The Emperor was both stunned and impressed by this response from Gualdrada. Learning that he was speaking to her father, he praised her in an eloquent speech to everyone of her virtue. As he was leaving the festival he summoned one of his barons, called Guido, and promoted him to a count. He then presented to Gualdrada a large dowry consisting of Casentino and a part of the territory of Romagna. Gualdrada was then given to Guido in marriage.

From the marriage of Gualdrada and Guido came two sons, Guglielmo and Ruggieri. Ruggieri was the father of Guidoguerra, a leader of a group of four hundred Florentines of the Guelf party. They were contributory to the victory in 1265 of Charles of Anjou at Benevento over Manfred of Sicily. In 1266 Charles became King of Sicily.