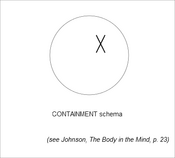 An image schema (both schemas and schemata are used as plural forms) is a recurring structure within our cognitive processes which establishes patterns of understanding and reasoning. As an understudy to embodied cognition, image schemas are formed from our bodily interactions,[1] from linguistic experience, and from historical context. The term is introduced in Mark Johnson's book The Body in the Mind; in case study 2 of George Lakoff's Women, Fire and Dangerous Things: and further explained by Todd Oakley in The Oxford handbook of cognitive linguistics; by Rudolf Arnheim in Visual Thinking; by the collection From Perception to Meaning: Image Schemas in Cognitive Linguistics edited by Beate Hampe and Joseph E. Grady.

In contemporary cognitive linguistics, an image schema is considered an embodied prelinguistic structure of experience that motivates conceptual metaphor mappings. Learned in early infancy they are often described as spatiotemporal relationships that enable actions and describe characteristics of the environment. They exist both as static and dynamic version, describing both states and processes,[2] compare Containment vs. Going_In/Out, and they are learned from all sensorimodalities.

Evidence for image schemas is drawn from a number of related disciplines, including work on cross-modal cognition in psychology, from spatial cognition in both linguistics and psychology,[3] cognitive linguistics,[4] and from neuroscience.[5] The influences of image schemas is not only seen in cognitive linguistics and developmental psychology, but also in interface design[6] and more recently, the theory has become of increased interest in artificial intelligence[7] and cognitive robotics[8] to help ground meaning.

Johnson: From image schemas to abstract reasoning via metaphor 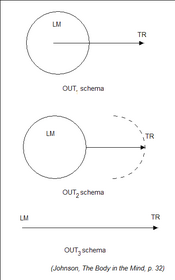 Image schemas are dynamic embodied patterns—they take place in and through time. Moreover, they are multi-modal patterns of experience, not simply visual. For instance, consider how the dynamic nature of the containment schema is reflected in the various spatial senses of the English word out. Out may be used in cases where a clearly defined trajector (TR) leaves a spatially bounded landmark (LM), as in:

In the most prototypical of such cases the landmark is a clearly defined container. However, out may also be used to indicate those cases where the trajector is a mass that spreads out, effectively expanding the area of the containing landmark:

Finally, out is also often used to describe motion along a linear path where the containing landmark is implied and not defined at all:

(3) The train started out for Chicago.

Experientially basic and primarily spatial image schemas such as the Containment schema and its derivatives the Out schemas lend their logic to non-spatial situations. For example, one may metaphorically use the term out to describe non-spatial experiences:

Johnson argues that more abstract reasoning is shaped by such underlying spatial patterns. For example, he notes that the logic of containment is not just a matter of being in or out of the container. For example, if someone is in a deep depression, we know it is likely to be a long time before they are well. The deeper the trajector is in the container, the longer it will take for the trajector to get out of it. Similarly, Johnson argues that transitivity and the law of the excluded middle in logic are underlaid by preconceptual embodied experiences of the Containment schema.

Lakoff: Image schemas in Brugman's The story of Over

In case study two of his book Women, Fire and Dangerous Things, Lakoff re-presented the analysis of the English word over done by Claudia Brugman in her (1981) master's thesis. Similar to the analysis of out given by Johnson, Lakoff argued that there were six basic spatial schemas for the English word over. Moreover, Lakoff gave a detailed accounting of how these schemas were interrelated in terms of what he called a radial category structure. For example, these six schemas could be both further specified by other spatial schemas such as whether the trajector was in contact with the landmark or not (as in the plane flew over the mountain vs. he climbed over the mountain). Furthermore, Lakoff identified a group of "transformational" image schemata such as rotational schemas and path to object mass, as in Spider-Man climbed all over the wall. This analysis raised profound questions about how image schemas could be grouped, transformed, and how sequences of image schemas could be chained together in language, mind and brain.

Johnson indicates that his analysis of out drew upon a 1981 doctoral dissertation by Susan Lindner in linguistics at UCSD under Ronald Langacker, and more generally by the theory of cognitive grammar put forth by him.[9] For the force group of image schemas Johnson also drew on an early version of the force dynamic schemas put forth by Len Talmy, as used by linguists such as Eve Sweetser. Other influences include Max Wertheimer's gestalt structure theory and Kant's account of schemas in categorization, as well as studies in experimental psychology on the mental rotation of images.

Image schemas have also been proposed to be descriptors of Gibsonian affordances. An object like a cup affords the image schema Containment to liquids and an abstract concept like transportation offer the affordance of moving something from one point to another as an image-schematic combination of Source-Path-Goal and Containment (alternatively Support).

Formal specification of image schemas and role in artificial intelligence 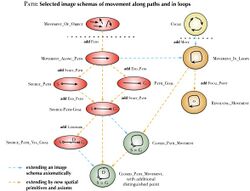 While originally a theory for cognitive linguistics, the theory of image schemas and the underlying ideas behind embodied cognition have become of increased interest in artificial intelligence and cognitive robotics to help solve issues with natural language comprehension and the application of affordances. The research on formal accounts (e.g.[13][14]) of these abstract patterns date back several decades and has been proposed as a way to deal with geographical information science ,[15] natural language comprehension, automatic ontology generation[16] and computational conceptual blending.[17]

As a direct relation to embodied cognition, and more specifically embodied construction grammar, formal approaches to image schemas often limit the research area by looking at image schemas exclusively as spatiotemporal relationships. This provides a feasible foundation for knowledge representation to represent each individual image schema as well as their interconnection as relationships in a 3D space. One formal language to describe them is the ISL (Image Schema Language), a logic language combined by different formal calculi and first-order logic that builds on creating hierarchical families of logical micro-theories that is able to represent different degrees of specification of the image schemas.[14]

In artificial intelligence, image schemas are also used as an inspiration to advance natural language comprehension of metaphors, conceptual blending and creative language use. This is extended to also include non-linguistic reasoning such as commonsense reasoning (e.g. see Davis' Egg cracking problem and the approach made to describe it image-schematically[18]) and the formal structure of events[19] prototypical as some of the biggest challenges in AI.

While Johnson provided an initial list of image schemas in The Body in the Mind (p. 126), his diagrams for them are scattered throughout his book and he only diagrammed a portion of those image schemas he listed. In his work, Lakoff also used several additional schemas.

Schemas listed, but not discussed, by Johnson

Schemas proposed and discussed by others