The four morphological elements of Chinese xinyuanyima or Japanese shin'en'iba are xin or shin 心 "heart; mind", yi or i 意 "thought", yuan or en 猿 "monkey", and ma or ba 馬 "horse"'.

The psychological components of the "mind-monkey will-horse" metaphor are Chinese xin or Sino-Japanese shin or kokoro 心 "heart; mind; feelings, affections; center" and yi or i 意 'thought, idea; opinion, sentiment; will, wish; meaning'. This Chinese character 心 was graphically simplified from an original pictogram of a heart, and 意 "thought; think" is an ideogram combining 心 under yin 音 "sound; tone; voice" denoting "sound in the mind; thought; idea". 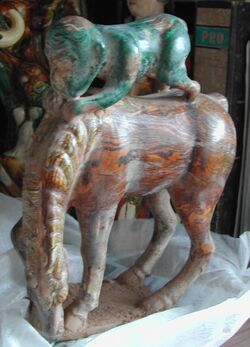 When one breathes in and out, one's concentration causes the generative force to rise and fall (in the microcosmic orbit) thus slowly turning the wheel of the law. Count from one to ten and then from ten to one hundred breaths with the heart (mind) following the counting to prevent it from wandering outside. When the heart and breathing are in unison, this is called locking up the monkey heart and tying up the running horse of intellect. (Luk 1990:48)

The Japanese kanji 猿 is pronounced as Sino-Japanese en < yuan or native saru "monkey", especially the indigenous "Japanese macaque, Macaca fuscata". In Japanese Shinto tradition, the monkey deity Sarutahiko was a divine messenger. Emiko Ohnuki-Tierney (1987:41) contrasts how, "in earlier periods the dominant meaning of the monkey was that of mediator between deities and humans. Later in history, its meaning as a scapegoat became increasingly dominant."

He was invested with sanctity by ancient tradition, endowed with prodigious qualities, and visibly stamped with the marks of his divine origin. A revered myth proclaimed him a relative of the dragon, akin to the mysterious powers of water. Indeed, all wonderful horses, such as the steed of the pious Hsüan-tsang which, in later legend [see the Xiyouji below], carried the sacred scriptures from India, were avatars of dragons, and in antiquity the tallest horses owned by the Chinese were called simply "dragons." (1963:59)

Besides the "mind-monkey idea-horse" metaphor, monkeys and horses have further associations. In Chinese astrology, wu 午 "Horse" and shen 申 "Monkey" are the 7th and 9th of the 12 zodiacal animals. In Chinese animal mythology, monkeys supposedly bring good health to horses. The Bencao Gangmu (tr. Read 1931, no. 400) records the "custom of keeping a female monkey in the horse's stable to ward off sickness (the menstrual discharge of the monkey is said to give immunity to the horse against infectious diseases)".

This section summarizes Chinese and Japanese developments of xinyuan or shin'en 心猿 "mind-monkey" and yima or iba 意馬 "idea-horse" collocations and their synonyms. The earliest known textual usages are presented chronologically.

Chinese authors coined "mind monkey" expressions from the Later Qin Dynasty (384-417 CE) through the Song Dynasty (960-1279 CE). In modern usage, some terms are considered Classical Chinese, but others like xinyuanyima "mind-monkey will-horse" are Modern Standard Chinese. Unless otherwise noted, translations are by Carr (1993:154-159).

The c. 406 Weimojie suoshuo jing 維摩詰所說經 was Kumarajiva's groundbreaking CE Chinese translation of the Vimalakirti Sutra. It introduced "mind-monkey" in the simile xin ru yuanhou 心如猨猴 "heart/mind like a monkey/ape" (with yuan 猿's variant Chinese character 猨). "Since the mind of one difficult to convert is like an ape, govern his mind by using certain methods and it can then be broken in" (tr. Dudbridge 1970:168). Carr (1993:169) suggests the subsequent line about xiang ma 象馬 "elephants and horses" having unruly natures could have affected the later yima "idea-horse" term.

The Daci'ensi sanzang fashizhuan 大慈恩寺三藏法師傳 "Biography of the Tripitaka Dharma Master of the Temple of Great Compassionate Blessings" is a biography of Xuanzang (see the Xiyouji below) written by his disciple Kuiji (or Ci'en, the namesake temple in Luoyang, see Emperor Gaozong of Tang). This record of the Consciousness-Only (Yogacara) Buddhism, has a memorial dated 657 CE that parallels yima "idea-/will-horse" with qingyuan 情猿 "emotion-/feeling-monkey": "Now if you wish to entrust your thoughts to the Chan sect, you must make your mind as pure as still water, control your emotion-monkey's indolence and fidgeting, and restrain your idea-horse's haste and galloping."

The Tang Dynasty poet Xu Hun 許渾 (fl. 832-844) wrote the first known parallel between "mind-monkey" and "idea-horse." His Zengti Du yinju 贈題杜隱居 "Poem Written for Sir Du the Recluse" says: "Nature exhausts the mind-monkey's hiding, spirit disperses the idea-horse's moving/stopping. Guests who come ought to know this: both self and world are unfeeling."

The 1075 CE Wuzhen pian, which is a Daoist classic on Neidan-style internal alchemy, used xinyuan "mind-monkey" without "horse".

Thoroughly understanding the mind-monkey, the machinations in the heart, by three thousand achievements one becomes a peer of heaven. There naturally is a crucible to cook the dragon and tiger; Why is it necessary to support a household and be attached to spouse and children? (tr. Cleary 1987:118)

Cleary (1987:198) glosses xinyuan as "the unruly mind, jumping from one object to another."

The c. 1200 Nan Tang shu 南唐書 "History of the Southern Tang" used the simile yi ru ma xin ru nao 意如馬心如猱 "ideas like a horse and mind like a gibbon/monkey". Congshan 從善 (939-987), seventh son of the figurehead Emperor Yuanzong of Southern Tang, confesses: "Long ago in my youth, my ideas were like a horse and my mind was like a monkey. I was indolent with happiness and enjoyed lust, was pleased with rewards and forgot toil." 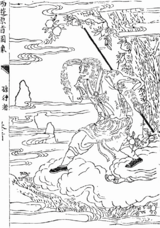 The c. 1590 Xiyouji 西遊記 "Journey to the West" (or "Monkey") popularized "mind-monkey" more than any other text. This famous Chinese novel centers upon the pilgrimage of Xuanzang to India, and frequently uses xinyuan and yima expressions (Dudbridge 1970:167, Chang 1983:200). Many are found in the couplet titles of chapters, for instance, 30 "The evil demon attacks the true Dharma; The Horse of the Will recalls the Monkey of the Mind". The preeminent translator Anthony C. Yu (1977:59) describes controlling the mind-monkey and will-horse as "a theme central to the entire narrative and which receives repeated and varied developments." Chapter 7 has this exemplary poem:

A monkey's transformed body weds the human mind. Mind is a monkey – this, the truth profound. The Great Sage [Buddha], Equal to Heaven, is no idle thought. For how could the post of [Bima "Assistant of Horses"] justly show his gifts? The Horse works with the Monkey – and this means both Mind and Will, Must firmly be harnessed and not ruled without. All things return to Nirvāna, taking this one course: In union with Tathāgata [Buddha] to live beneath twin trees. (tr. Yu 1977:168)

Many Xiyouji scholars allegorically interpret xinyuan "heart-/mind-monkey" as the protagonist monkey-man Sun Wukong and yima "idea-/will-horse" as the dragon prince White Horse that enters the story in chapter 15. There are long-standing scholarly disagreements over whether Sun Wukong evolved from Hanuman, the monkey hero in the (3rd century BCE) Ramayana. It is "imagistically proper" for Sun to be a monkey, says Mair (1989:662), because "Zen thought symbolizes the restless and unbridled mind of man as an "ape/monkey-mind" 心猿."

During the Kamakura period (1185–1333 CE), Pure Land Buddhism introduced the Sino-Japanese terms shin'en 心猿 "mind-monkey" and iba 意馬 "idea-horse", and an early travelogue popularized them. The Genkyū hōgo 元久法語 "Genkyū era (1204–1206) Buddhist Sermons" is a collection of writings by Hōnen, the founder of the Jōdo Shū. His c. 1205 "Tozanjō 登山状 "Mountain Climbing Description" (tr. adapted from Carr 1993:159) uses iba with shin'en: "When you wish to enter the gate of determined goodness, then your idea-horse runs wild within the bounds of the six sense objects [rokujin 六塵 < Ayatana: "form, sound, smell, taste, tangibility, and dharma"]. When you wish to enter the gate of scattered goodness, then your mind-monkey gambols and jumps across the branches of the ten evil deeds [jūaku 十悪: killing, stealing, adultery, lying, cursing, slandering, equivocating, coveting, anger, and false views]." The 1223 Kaidōki 海道記 "Record of Coast Road Travels" was a travelogue of the Tōkaidō (road) from Kyoto to Kamakura. It used shinsen 心船 "heart/mind boat" meaning "imaginary journey" with iba 意馬 "idea/will horse" and wrote arasaru 荒猿 "wild monkey" for arasu 荒す "treat roughly/wildly": "I rowed the mind-boat for make-believe. As yet, I neither poled across myriad leagues of waves on the Coast Road, nor roughly rode the idea-horse to urge it on through clouds of the distant mountain barrier."

During the early Edo period (1603–1868), the four-character Chinese collocations yimashinen 意馬心猿 and shinenyima 心猿意馬 were introduced into Japanese. The 1675 Man'an kana hōgo 卍庵仮名法語, which was a vernacular collection of Zen sermons, first used shin'en'iba 意馬心猿. "For this reason, even if you reside somewhere with remote mountain streams and desolate tranquillity, and sit in silent contemplation, you will only be passing idle time because you are isolated from the road of the mind-monkey and idea-horse." The 1699 Kabuki play Wakoku gosuiten 和国五翠殿 "Japan's Five Green Palaces" repeatedly used ibashin'en. For instance, the first act described two prisoners tied to a tree: "They are the idea-horse and mind-monkey themselves. So if this pine tree is the pole of Absolute Reality, then these two prisoners are a greedy monkey – no, a cat – and a horse running wild; and they are just like the idea-horse and mind-monkey."

Mind monkey and monkey mind both occur in English usage, originally as translations of xinyuan or shin'en and later as culturally-independent images. Michael Carr concludes,

Xinyuan-yima 心猿意馬 "monkey of the heart/mind and horse of the ideas/will" has been a successful metaphor. What began 1500 years ago as a Buddhist import evolved into a standard Chinese and Japanese literary phrase. Rosenthal (1989:361) says a proverb's success "'depends on certain imponderables," particularly rhythm and phrasing. Of the two animals in this metaphor, the "monkey" phrase was stronger than the "horse" because xinyuan "mind-monkey" was occasionally used alone (e.g., Wuzhenpian) and it had more viable variants (e.g., qingyuan 情猿 "emotion-monkey" in Ci'en zhuan). The "mental-monkey" choice of words aptly reflects restlessness, curiosity, and mimicry associated with this animal. Dudbridge (1970:168) explains how "the random, uncontrollable movements of the monkey symbolise the waywardness of the native human mind before it achieves a composure which only Buddhist discipline can effect." (1993:166)

English translations of Chinese xinyuan or Japanese shin'en commonly include "mind monkey", "monkey mind", and "monkey of the mind".

Six of these 11 Chinese–English dictionaries enter only the common xinyuanyima "mind-monkey idea-horse," 2 only the reverse yimaxinyuan, and 3 enter both. Three translation equivalents give English "ape" rather than "gibbon" or "monkey" for yuan 猿, and "ape" sounds metaphorically stronger than "monkey." Note how several of these dictionaries have identical translations.

All 9 Japanese–English dictionaries mention "passion" or "passions." Note how Saito's "uncontrollable passions" first appeared in 1930 and was copied into 6 other dictionaries. The 5 editions of Kenkyūsha's New Japanese–English Dictionary illustrate lexicographical modifications. Editors copied the "clamorous demands of passion" phrase from the 1st edition (Takenobu's … 1918) into all the subsequent versions. The 2nd (1931) first added "uncontrollable" to "passions," which was copied in later editions. The 3rd edition (1954) included a literal translation "wild horses of passions and flighty monkeys of desires", but this was omitted from the 4th (1974) and 5th (2003, which added the definite article "the").

Examples of "mind monkey" are predictably common in Chinese popular culture. For instance, Sam yuen yi ma 心猿意馬 – the Cantonese pronunciation of Xinyuanyima "mind-monkey will-horse" – was a 1999 Hong Kong movie (known in English as "The Accident") by Stanley Kwan. However, examples of "mind monkey" are surprisingly widespread in modern English culture. For instance, there are blogs named "Mind Monkey!", "Mind of the Monkey", "Monkey Mind", and "No monkey mind". Author Steve Michael Reedy explores the concept of the Monkey Mind through his collection of children's fantasy stories in "Tales For Your Monkey's Mind."