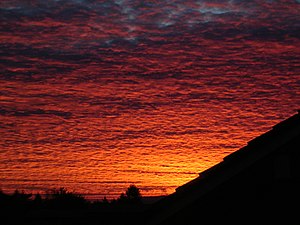 Red sky at morning, during sunrise 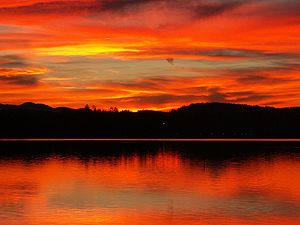 The common phrase "red sky at morning" is a line from an ancient rhyme often repeated by mariners:[1]

The concept is over two thousand years old and is referenced in the New Testament as established wisdom that prevailed among the Jews of the Second Temple Period by Jesus in Matthew 16:2-3.

The rhyme is a rule of thumb used for weather forecasting during the past two millennia. It is based on the reddish glow of the morning or evening sky, caused by trapped particles scattering the blue light from the sun in a stable air mass.

There are occasions where a storm system might rain itself out before reaching the observer (who had seen the morning red sky). For ships at sea, however, the wind and rough seas from an approaching storm system could still be a problem, even without rainfall. 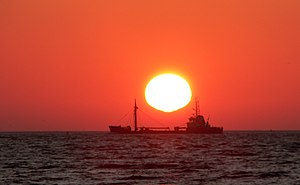 Red sky at morning, at sea

There are variations of the phrase, some including the plural word "sailors":

Another version uses the word "shepherds":

Another version uses "pink" in place of "red":

Another version uses "forlorn" in place of "warning":