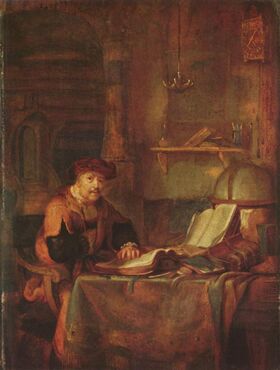 The Scholar and His Books by Gerbrand van den Eeckhout

A scholar is a person who pursues academic and intellectual activities, particularly academics who apply their intellectualism into expertise in an area of study. A scholar can also be an academic, who works as a professor, teacher, or researcher at a university. An academic usually holds an advanced degree or a terminal degree, such as a master's degree or a doctorate (PhD). Independent scholars, such as philosophers and public intellectuals, work outside of the academy, yet publish in academic journals and participate in scholarly public discussion.

In contemporary English usage, the term scholar sometimes is equivalent to the term academic, and describes a university-educated individual who has achieved intellectual mastery of an academic discipline, as instructor and as researcher. Moreover, before the establishment of universities, the term scholar identified and described an intellectual person whose primary occupation was professional research. In 1847, minister Emanuel Vogel Gerhart spoke of the role of the scholar in society:

[A] scholar [is one] whose whole inward intellectual and moral being has been symmetrically unfolded, disciplined and strengthened under the influence of truth... No one faculty should be drawn out to the neglect of others. The whole inner man should be unfolded harmoniously.[1]

Gerhart argued that a scholar can not be focused on a single discipline, contending that knowledge of multiple disciplines is necessary to put each into context and to inform the development of each:

[T]o be a scholar involves more than mere learning... A genuine scholar possesses something more: he penetrates and understands the principle and laws of the particular department of human knowledge with which he professes acquaintance. He imbibes the life of Science... [and] his mind is transfused and moulded by its energy and spirit.[1]

A 2011 examination outlined the following attributes commonly accorded to scholars as "described by many writers, with some slight variations in the definition":[2]

The common themes are that a scholar is a person who has a high intellectual ability, is an independent thinker and an independent actor, has ideas that stand apart from others, is persistent in her quest for developing knowledge, is systematic, has unconditional integrity, has intellectual honesty, has some convictions, and stands alone to support these convictions.[2]

Scholars may rely on the scholarly method or scholarship, a body of principles and practices used by scholars to make their claims about the world as valid and trustworthy as possible, and to make them known to the scholarly public. It is the methods that systemically advance the teaching, research, and practice of a given scholarly or academic field of study through rigorous inquiry. Scholarship is creative, can be documented, can be replicated or elaborated, and can be and is peer-reviewed through various methods.[3]

Scholars have generally been upheld as creditable figures of high social standing, who are engaged in work important to society. In Imperial China, in the period from 206 BC until AD 1912, the intellectuals were the Scholar-officials ("Scholar-gentlemen"), who were civil servants appointed by the Emperor of China to perform the tasks of daily governance. Such civil servants earned academic degrees by means of Imperial examination, and also were skilled calligraphers, and knew Confucian philosophy. Historian Wing-Tsit Chan concludes that:

Generally speaking, the record of these scholar-gentlemen has been a worthy one. It was good enough to be praised and imitated in 18th century Europe. Nevertheless, it has given China a tremendous handicap in their transition from government by men to government by law, and personal considerations in Chinese government have been a curse.[4]

In Joseon Korea (1392–1910), the intellectuals were the literati, who knew how to read and write, and had been designated, as the chungin (the "middle people"), in accordance with the Confucian system. Socially, they constituted the petite bourgeoisie, composed of scholar-bureaucrats (scholars, professionals, and technicians) who administered the dynastic rule of the Joseon dynasty.[5]

In his 1847 address, Gerhart asserted that scholars have an obligation to constantly continue their studies so as to remain aware of new knowledge being generated,[1] and to contribute their own insights to the body of knowledge available to all:

The progress of science involves momentous interests. It merits the attention of all sincere lovers of truth. Every ...scholar is under obligations to contribute towards the ever-progressive unfolding of its riches and power. [They]...should combine their energies to bring to view what has eluded the keen vision of those men of noble intellectual stature who have lived and died before them.[1]

Many scholars are also professors engaged in the teaching of others. In a number of countries, the title "research professor" refers to a professor who is exclusively or mainly engaged in research, and who has few or no teaching obligations. For example, the title is used in this sense in the United Kingdom (where it is known as research professor at some universities and professorial research fellow at some other institutions) and in northern Europe.

Research professor is usually the most senior rank of a research-focused career pathway in those countries, and regarded as equal to the ordinary full professor rank. Most often they are permanent employees, and the position is often held by particularly distinguished scholars; thus the position is often seen as more prestigious than an ordinary full professorship. The title is used in a somewhat similar sense in the United States, with the exception that research professors in the United States are often not permanent employees and often must fund their salary from external sources,[6] which is usually not the case elsewhere.

An independent scholar is anyone who conducts scholarly research outside universities and traditional academia. In 2010, twelve percent of US history scholars were independent.[7] Independent scholars typically have a Master's degree or PhD.[7] In history, independent scholars can be differentiated from popular history hosts for television shows and amateur historians "by the level to which their publications utilize the analytical rigour and academic writing style".[7]

In previous centuries, some independent scholars achieved renown, such as Samuel Johnson and Edward Gibbon during the 18th century and Charles Darwin and Karl Marx in the 19th century, and Sigmund Freud, Sir Steven Runciman, Robert Davidsohn and Nancy Sandars in the 20th century. There was also a tradition of the man of letters, such as Evelyn Waugh. The term "man of letters" derives from the French term belletrist or homme de lettres but is not synonymous with "an academic".[8][9] In the 17th and 18th centuries, the term Belletrist(s) came to be applied to the literati: the French participants in—sometimes referred to as "citizens" of—the Republic of Letters, which evolved into the salon aimed at edification, education, and cultural refinement.

Writer Megan Kate Nelson's article "Stop Calling Me Independent" says the term "marginalizes unaffiliated scholars" and is unfairly seen as an indicator of "professional failure".[12] Rebecca Bodenheimer says that independent scholars like her attending conferences who do not have a university name on their official name badge feel like the "independent scholar" term is perceived as a "signal that a scholar is either unwanted by the academy or unwilling to commit to the sacrifices necessary to succeed as an academic."[13]