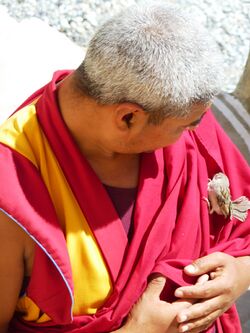 In Buddhism, sentient beings are beings with consciousness, sentience, or in some contexts life itself.[1] Sentient beings are composed of the five aggregates, or skandhas: matter, sensation, perception, mental formations and consciousness. In the Samyutta Nikaya, the Buddha is recorded as saying that "just as the word 'chariot' exists on the basis of the aggregation of parts, even so the concept of 'being' exists when the five aggregates are available."[2] While distinctions in usage and potential subdivisions or classes of sentient beings vary from one school, teacher, or thinker to another, it principally refers to beings in contrast with buddhahood. That is, sentient beings are characteristically not enlightened, and are thus confined to the death, rebirth, and dukkha (suffering) characteristic of saṃsāra.[3]

Those who greatly enlighten illusion are Buddhas; those who are greatly deluded about enlightenment are sentient beings.
——Dōgen[3]

In Mahayana Buddhism, it is to sentient beings that the Bodhisattva vow of compassion is pledged. Particularly in Tibetan Buddhism and Japanese Buddhism, all beings (including plant life and even inanimate objects or entities considered "spiritual" or "metaphysical" by conventional Western thought) are or may be considered sentient beings.[5][6]

Early scriptures in the Pāli Canon and the conventions of the Tibetan Bhavacakra classify sentient beings into five categories—divinities, humans, animals, tormented spirits, and denizens of hell—although sometimes the classification adds another category of beings called asuras between divinities and humans.[1]