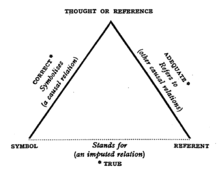 The triangle of reference, or semiotic triangle. Figure taken from page 11 of The Meaning of Meaning.

The triangle of reference (also known as the triangle of meaning[1] and the semiotic triangle) is a model of how linguistic symbols relate to the objects they represent. The triangle was published in The Meaning of Meaning (1923) by Charles Kay Ogden and I. A. Richards.[2] While often referred to as the "Ogden/Richards triangle", the idea was also expressed in 1810 by Bernard Bolzano, in his Beiträge zu einer begründeteren Darstellung der Mathematik. The triangle can be traced back to 4th century BC, in Aristotle's Peri Hermeneias. The Triangle relates to the problem of universals, a philosophical debate which split ancient and medieval philosophers, especially realists and nominalists.

The triangle describes a simplified form of relationship between the speaker as the subject, a concept as an object or referent, and its designation (sign, signans).

The relations between the triangular corners may be phrased more precisely in causal terms thus:

The triangle represents one person, whereas communication takes place between two entities; the latter can be represented by two triangles. When the two entities understand each other, the content that the triangles represent are aligned.

John Searle used the notion of "direction of fit" to create a taxonomy of illocutionary acts.[3][4]

The arrows indicate that there is something exchanged between the two parties in a feedback cycle, especially when the world is represented in both persons' minds and used for reality check.