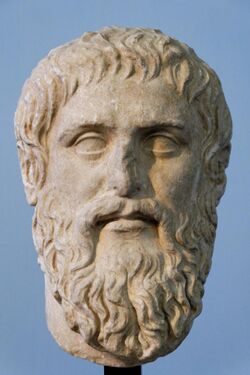 Roman copy of a portrait bust of Plato by Silanion for the Academia in Athens (c. 370 BC)

Platonic realism is the philosophical position that universals or abstract objects exist objectively and outside of human minds. It is named after the Greek philosopher Plato who applied realism to such universals, which he considered ideal forms. This stance is ambiguously also called Platonic idealism but should not be confused with idealism as presented by philosophers such as George Berkeley: as Platonic abstractions are not spatial, temporal, or mental, they are not compatible with the later idealism's emphasis on mental existence. Plato's Forms include numbers and geometrical figures, making them a theory of mathematical realism; they also include the Form of the Good, making them in addition a theory of ethical realism.

Plato expounded his own articulation of realism regarding the existence of universals in his dialogue The Republic and elsewhere, notably in the Phaedo, the Phaedrus, the Meno and the Parmenides.

In Platonic realism, universals do not exist in the way that ordinary physical objects exist, even though Plato metaphorically referred to such objects in order to explain his concepts. More modern versions of the theory seek to avoid applying potentially misleading descriptions to universals. Instead, such versions maintain that it is meaningless (or a category mistake) to apply the categories of space and time to universals.

Regardless of their description, Platonic realism holds that universals do exist in a broad, abstract sense, although not at any spatial or temporal distance from people's bodies. Thus, people cannot see or otherwise come into sensory contact with universals, but in order to conceive of universals, one must be able to conceive of these abstract forms.

Platonic realism satisfies one of those constraints, in that it is a theory of what general terms refer to. Forms are ideal in supplying meaning to referents for general terms. That is, to understand terms such as applehood and redness, Platonic realism says that they refer to forms. Indeed, Platonism gets much of its plausibility because mentioning redness, for example, would be intuitively assumed to be referring to something that is apart from space and time, but which has many specific instances.

Some contemporary linguistic philosophers construe "Platonism" to mean the proposition that universals exist independently of particulars (a universal is anything that can be predicated of a particular). Similarly, a form of modern Platonism is found in the philosophy of mathematics, especially regarding the foundations of mathematics. The Platonic interpretation of this philosophy includes the thesis that mathematics is discovered rather than created.

Plato's interpretation of universals is linked to his Theory of Forms in which he uses both the terms εἶδος (eidos: "form") and ἰδέα (idea: "characteristic") to describe his theory. Forms are mind independent abstract objects or paradigms (παραδείγματα: patterns in nature) of which particular objects and the properties and relations present in them are copies. Form is inherent in the particulars and these are said to participate in the form. Classically idea has been translated (or transliterated) as "idea," but secondary literature now typically employs the term "form" (or occasionally "kind," usually in discussion of Plato's Sophist and Statesman) to avoid confusion with the English word connoting "thought".

Some versions of Platonic realism, like that of Proclus, regard Plato's forms as thoughts in the mind of God. Most consider forms not to be mental entities at all.

According to Plato, there are some forms that are not instantiated at all, but, he contends, that does not imply that the forms could not be instantiated. Forms are capable of being instantiated by many different particulars, which would result in the forms' having many copies, or inhering many particulars.

Two main criticisms with Platonic realism relate to inherence and the difficulty of creating concepts without sense perception. Despite these criticisms, realism has strong defenders. Its popularity through the centuries has been variable.

Critics claim that the terms "instantiation" and "copy" are not further defined and that participation and inherence are similarly mysterious and unenlightening. They question what it means to say that the form of applehood inheres a particular apple or that the apple is a copy of the form of applehood. To the critic, it seems that the forms, not being spatial, cannot have a shape, so it cannot be that the apple is the same shape as the form. Likewise, the critic claims it is unclear what it means to say that an apple participates in applehood.

Arguments refuting the inherence criticism, however, claim that a form of something spatial can lack a concrete (spatial) location and yet have in abstracto spatial qualities. An apple, then, can have the same shape as its form. Such arguments typically claim that the relationship between a particular and its form is very intelligible and easily grasped; that people unproblematically apply Platonic theory in everyday life; and that the inherence criticism is only created by the artificial demand to explain the normal understanding of inherence as if it were highly problematic. That is, the supporting argument claims that the criticism is with the mere illusion of a problem and thus could render suspect any philosophical concept.

Criticism of concepts without sense-perception

A criticism of forms relates to the origin of concepts without the benefit of sense-perception. For example, to think of redness in general, according to Plato, is to think of the form of redness. Critics, however, question how one can have the concept of a form existing in a special realm of the universe, apart from space and time, since such a concept cannot come from sense-perception. Although one can see an apple and its redness, the critic argues, those things merely participate in, or are copies of, the forms. Thus, they claim, to conceive of a particular apple and its redness is not to conceive of applehood or redness-in-general, so they question the source of the concept.

Plato's doctrine of recollection, however, addresses such criticism by saying that souls are born with the concepts of the forms, and just have to be reminded of those concepts from back before birth, when the souls were in close contact with the forms in the Platonic heaven. Plato is thus known as one of the first rationalists, believing as he did that humans are born with a fund of a priori knowledge, to which they have access through a process of reason or intellection—a process that critics find to be rather mysterious.

A more modern response to this criticism of concepts without sense-perception is the claim that the universality of its qualities is an unavoidable given because one only experiences an object by means of general concepts. So, since the critic already grasps the relation between the abstract and the concrete, he is invited to stop thinking that it implies a contradiction. The response reconciles Platonism with empiricism by contending that an abstract (i.e., not concrete) object is real and knowable by its instantiation. Since the critic has, after all, naturally understood the abstract, the response suggests merely to abandon prejudice and accept it.