The binary collision approximation (BCA) signifies a method used in ion irradiation physics to enable efficient computer simulation of the penetration depth and defect production by energetic (with kinetic energies in the kilo-electronvolt (keV) range or higher) ions in solids. In the method, the ion is approximated to travel through a material by experiencing a sequence of independent binary collisions with sample atoms (nuclei). Between the collisions, the ion is assumed to travel in a straight path, experiencing electronic stopping power, but losing no energy in collisions with nuclei.[1][2][3]

In the BCA approach, a single collision between the incoming ion and a target atom (nucleus) is treated by solving the classical scattering integral between two colliding particles for the impact parameter of the incoming ion. Solution of the integral gives the scattering angle of the ion as well as its energy loss to the sample atoms, and hence what the energy is after the collision compared to before it.[1] The scattering integral is defined in the centre-of-mass coordinate system (two particles reduced to one single particle with one interatomic potential) and relates the angle of scatter with the interatomic potential.

It is also possible to solve the time integral of the collision to know what time has elapsed during the collision. This is necessary at least when BCA is used in the "full cascade" mode, see below.

In the so-called Monte Carlo BCA approach the distance to and impact parameter of the next colliding atom is chosen randomly for a probability distribution which depends only on the atomic density of the material. This approach essentially simulates ion passage in a fully amorphous material. (Note that some sources call this variety of BCA just Monte Carlo, which is misleading since the name can then be confused with other completely different Monte Carlo simulation varieties). SRIM and SDTrimSP are Monte-Carlo BCA codes.

It is also possible (although more difficult) to implement BCA methods for crystalline materials, such that the moving ion has a defined position in a crystal, and the distance and impact parameter to the next colliding atom is determined to correspond to an atom in the crystal. In this approach BCA can be used to simulate also atom motion during channelling. Codes such as MARLOWE operate with this approach.

The binary collision approximation can also be extended to simulate dynamic composition changes of a material due to prolonged ion irradiation, i.e. due to ion implantation and sputtering.[6]

At low ion energies, the approximation of independent collisions between atoms starts to break down. This issue can be to some extent augmented by solving the collision integral for multiple simultaneous collisions.[3][7] However, at very low energies (below ~1 keV, for a more accurate estimate see [8]) the BCA approximation always breaks down, and one should use molecular dynamics ion irradiation simulation approaches because these can, per design, handle many-body collisions of arbitrarily many atoms. The MD simulations can either follow only the incoming ion (recoil interaction approximation or RIA [9]) or simulate all atoms involved in a collision cascade .[10]

The BCA simulations can be further subdivided by type depending on whether they only follow the incoming ion, or also follow the recoils produced by the ion (full cascade mode, e.g., in the popular BCA code SRIM). If the code does not account for secondary collisions (recoils), the number of defects is then calculated using the Robinson extension of the Kinchin-Pease model.

If the initial recoil/ion mass is low, and the material where the cascade occurs has a low density (i.e. the recoil-material combination has a low stopping power), the collisions between the initial recoil and sample atoms occur rarely, and can be understood well as a sequence of independent binary collisions between atoms. This kind of a cascade can be theoretically well treated using BCA. 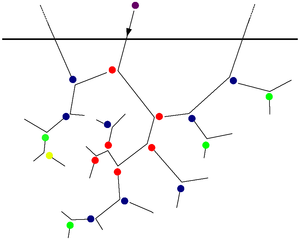 Schematic illustration of a linear collision cascade. The thick line illustrates the position of the surface, and the thinner lines the ballistic movement paths of the atoms from beginning until they stop in the material. The purple circle is the incoming ion. Red, blue, green and yellow circles illustrate primary, secondary, tertiary and quaternary recoils, respectively. In between the ballistic collisions the ions move in a straight path. BCA can in "full cascade mode" describe well linear collision cascades.

The BCA simulations give naturally the ion penetration depth, lateral spread and nuclear and electronic deposition energy distributions in space. They can also be used to estimate the damage produced in materials, by using the assumption that any recoil which receives an energy higher than the threshold displacement energy of the material will produce a stable defect.

However, this approach should be used with great caution for several reasons. For instance, it does not account for any thermally activated recombination of damage, nor the well known fact that in metals the damage production is for high energies only something like 20% of the Kinchin-Pease prediction.[11] Moreover, this approach only predicts the damage production as if all defects were isolated Frenkel pairs, while in reality in many cases collision cascades produce defect clusters or even dislocations as the initial damage state.[12][13] BCA codes can, however, be extended with damage clustering and recombination models that improve on their reliability in this respect.[14][15] Finally, the average threshold displacement energy is not very accurately known in most materials.