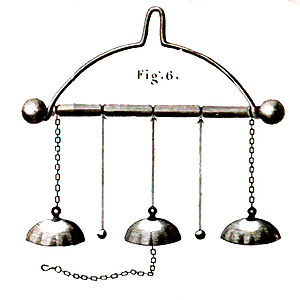 An illustration of a set of Franklin bells, printed in George Adams' Lectures on Natural and Experimental Philosophy.

Franklin bells (also known as Gordon's Bells or lightning bells) are an early demonstration of electric charge designed to work with a Leyden jar. Franklin bells are only a qualitative indicator of electric charge and were used for simple demonstrations rather than research. This was the first device that converted electrical energy into mechanical energy in the form of continuous mechanical motion, in this case, the moving of a bell clapper back and forth between two oppositely charged bells.

This device is named for Benjamin Franklin, an early adopter who used it during his experimentation with electricity. It was discovered by the Scottish inventor Andrew Gordon, Professor of Natural Philosophy at the University of Erfurt, Germany .[citation needed] About 1742 he invented a device known as the "electric chimes", which was widely described in textbooks of electricity. Franklin made use of Gordon's idea by connecting one bell to his pointed lightning rod, attached to a chimney, and a second bell to the ground. One of his papers contains the following description:

In September 1752, I erected an Iron Rod to draw the Lightning down into my House, in order to make some Experiments on it, with two Bells to give Notice when the Rod should be electrified.

The central bell's chain is put in contact with the inner surface of a Leyden jar, while the outside surface of the jar is put in contact with the metal stand. Thus, the central bell takes its charge from the inner surface of the jar, while the outer surface charges the two bells on the conductive chains. This causes the bells to have a difference in electrical potential equal to that between the inner and outer surfaces of the jar. The hanging metal clappers will be attracted to one bell, will touch it, pick up its charge, and be repelled; they will then swing across to the other bell, and do the same there. Each time the clappers touch a bell, charge is transferred between the inner and outer surfaces of the Leyden jar. When the jar is completely discharged, the bells will stop ringing.