Hokitika is a town in the West Coast region of New Zealand's South Island, 40 kilometres (25 mi) south of Greymouth, and close to the mouth of the Hokitika River. It is the seat and largest town in the Westland District. The town's estimated population is 2,910 as of June 2021.[1]

On a clear day Aoraki / Mount Cook can clearly be seen from Hokitika's main street.

The name Hokitika translates from Māori as "to return directly" (from hoki, 'to return', and tika, 'direct'). According to the Ministry for Culture and Heritage, the name comes from when a band of Ngāi Tahu warriors in search of greenstone were about to attack Ngāti Wairangi pā. The chief of the invaders drowned while trying to cross the Hokitika River, and the leaderless taua (army) then returned directly to their own home.[2] 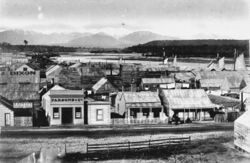 Hokitika township in the 1870s 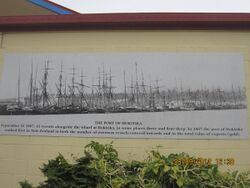 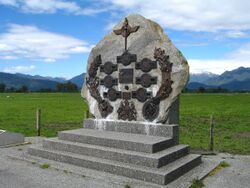 Memorial for the 1941 shooting, Kowhitirangi

The land where Hokitika stands was purchased in 1860 from Māori when Poutini Ngāi Tahu chiefs signed the Arahura Deed. This was the sale of the whole of the West Coast region, apart from small areas reserved for Māori. It was almost 3 million hectares and sold to the Crown for £300.[3][4][5]

Founded on gold mining in 1864, it was a centre of the West Coast Gold Rush and grew very quickly.[3] Members of the Jewish community ran stores and businesses and built a synagogue in Tancred St.[6] One of them, John Lazar, was appointed Town Clerk in 1866 and was a prominent Freemason.[6][7]

By late 1866, it was one of New Zealand's most populous centres. On 16 September 1867, there were 41 vessels alongside the wharf at Hokitika, in some places three and four deep. In 1867, the port of Hokitika ranked first in New Zealand in both the number of vessels entered inwards and in the total value of exports; principally gold.

On 8 March 1868 a mock funeral was held in protest about the conviction and hanging of three Irish Fenians in Manchester – the Manchester Martyrs. The funeral was led by Roman Catholic Father William Larkin and a Celtic Cross was erected in the Hokitika Cemetery. Larkin was later arrested, charged, and convicted of riot and seditious libel.[8]

In 1873 Hokitika became the capital of the short-lived Westland Province which lasted from 1873 until the abolition of provinces in 1876.

In the early 20th century Hokitika had two hospitals, the Westland Hospital and the Seaview Asylum.[9]

In October 1941, three Hokitika police officers (and a policeman stationed in the neighbouring locality of Kaniere), along with a field instructor for the Canterbury education board, were killed when a local farmer, Stanley Graham, went on a shooting rampage and killed seven people, including two armed Home guard personnel. 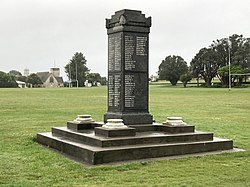 In the ensuing manhunt, the biggest in New Zealand history, overseen by the Commissioner of Police, Denis Cummings, more than 100 New Zealand Police and several hundred New Zealand Army & Home Guard searched the area for the gunman for 12 days, with orders to shoot him on sight if found still armed. On 20 October, after being spotted by two police constables and a local civilian carrying his rifle and ammunition belts, Graham was fatally wounded by a police constable and died the next day.[10]

The population has declined greatly since that time but the population of the Westland District is now on the rise thanks to "lifestyle inhabitants". Almost 30% of the district's rate-payers live outside of Hokitika.

Hokitika has an oceanic climate, with mild summers, cool winters, and rainfall evenly distributed across the year. It is one of the wettest places in New Zealand, with over 2,800 mm (110 in) of rainfall per year. Script error: No such module "weather box". 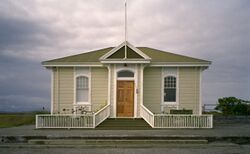 Nearby Hokitika Gorge is a popular short tourist walk, with vibrant blue water and a "swing" (metal rope suspension) bridge.[12][13]

The Hokitika urban area, as defined by Statistics New Zealand, covers 3.91 km2 (1.51 sq mi) and is coterminous with the Hokitika statistical area. The urban area has an estimated population of 2,910 as of June 2021.[1]

The proportion of people born overseas was 11.6%, compared with 27.1% nationally. 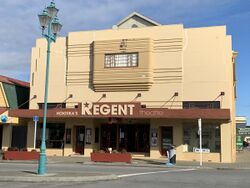 The major industries of greenstone (pounamu), gold, coal, and forestry have all dwindled over the last century, but a growing ecotourism industry has grown up and the town is starting to show signs of recovery. It has become a major tourist stop on the West Coast's main highway route, with carving of greenstone an important local industry. It is also gaining a reputation for its annual wild food festival which has been running since 1990.[15]

Seaview Asylum was once the town's biggest employer.[16] 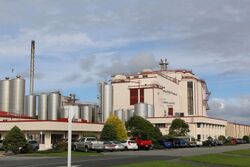 The Westland Milk factory in Hokitika (2021)

Another important industry is dairying, with Westland Milk Products having its headquarters and main processing plant in the town. Westland Milk Products was established as a dairy co-operative in 1937, and was sold to the Yili Group in 2019.[17] It is the country's third-equal largest dairy processor as of 2018.[18]

Hokitika has a 3D digital cinema,[19] the Regent Theatre,[20] due to volunteer hours[21] and grants from the Lions foundation, Lottery's commission, Development West Coast through the Major District Initiative[22] and pub charity. The Art Deco theatre is a heritage building and narrowly avoided being demolished, thanks to a last-minute coup in the management committee.[23] Community performances are also held there. Hokitika has a drama group which produce plays. It is also on the circuit for Arts on Tour and well known artists from many countries as well as New Zealand perform at the Old Lodge Theatre.

Hokitika driftwood sign marks the spot for the Driftwood and Sand Festival. The sign is a popular destination with tourists.

Every January, Hokitika beach hosts the Driftwood and Sand Festival. The festival involves members of the public and a sponsored artist constructing sculptures out of beach debris. Driftwood and Sand originated in beach festival run by Hokitika artist Donald Buglass in November 2002, and it has been run as an annual festival since 2003.[24]

The Hokitika Museum is housed in the town's Carnegie library building. The Hokitika Sock Machine Museum in Revell Street has on display a collection of antique sock-knitting machines. Visitors are invited to knit their own socks.[25] Hokitika also has a modern library, thriving community groups, and many excellent artists. 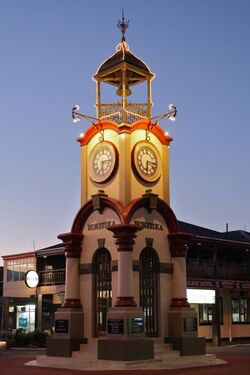 The Hokitika Clock Tower at dusk

Arahura Marae is located near Hokitika. It is a marae (tribal meeting ground) of Ngāi Tahu and its Te Rūnanga o Ngāti Waewae branch, and includes the Tūhuru wharenui (meeting house).[26][27]

In October 2020, the Government committed $161,131 from the Provincial Growth Fund to upgrade the marae, and create four jobs.[28]

Template:NZlSH passes through the town.

Air New Zealand provides two flights a day to Christchurch. The Hokitika Airport is adjacent to the town, immediately to the north-east in the suburb of Seaview.

The Hokitika Branch line runs to the town from Greymouth, connecting there with the Midland Line to Christchurch.

The first rail transport was the Hokitika & Kanieri Tramway laid with wooden rails was established in 1868, with cars drawn by horses.[29] A road followed in 1873.[30]

A branch line railway known as the Hokitika Branch was established to the town from Greymouth in 1893, and an extension to Ross was open from 1909 to 1980.

Passengers to Hokitika were initially served by mixed trains that carried both goods and passengers. In 1936, these services were augmented by a Leyland diesel railbus service that ran from Hokitika to Greymouth, Christchurch, and briefly Reefton. In the early 1940s, the Vulcan railcars were introduced and they provided a twice-daily service between Ross and Christchurch via Hokitika. The mixed trains continued to operate until 1967, and all passenger services to Hokitika ceased when the Vulcan railcars stopped running past Greymouth in 1972.

Since then, the line to Hokitika has been freight only with traffic primarily coming from Westland Milk Products.

In 1865, after the discovery of gold in the area, the town became the official port of entry of the West Coast. A boom period ensued when Hokitika was second only to Auckland, with reports of over 40 ships in the harbour at one time, with more waiting offshore.

It was a dangerous port, however, with 108 strandings and 32 ships lost from 1865 to 1867. The lack of nearby coal meant that the port declined rapidly along with the gold, though Hokitika remained an official entry port until the 1950s.[31] 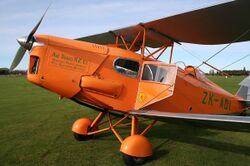 Hokitika's Southside airfield was the base of Air Travel, New Zealand's first airline. Air Travel carried passengers, mail and freight south from Hokitika to the glaciers and remote landing strips beyond Haast and north up to Westport. Its first scheduled flight was in December 1934. Directors were Hokitika residents: Bert Mercer, Paul Renton and Harry Newman.

After the second world war Air Travel was nationalised and became part of NAC. 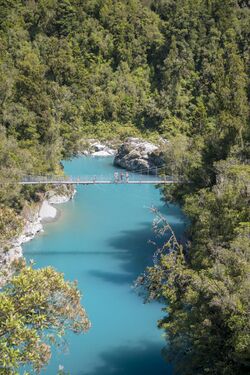 Hokitika Gorge, with swing bridge in the background. Shows the bright blue water.

A school was described as "recently opened" in Hokitika in 1875, and had nearly 350 students.[32] The Hokitika District High School provided both primary and secondary education for the area for many years. Its name was changed in 1963 to Westland High School, which caters for years 7 to 13 and has a roll of 352.[33]

St Mary's School is a full primary (years 1–8) school with a roll of 131.[35] It is a state integrated Catholic school[36] and is connected with St Mary's Catholic Church.

All these schools are coeducational. Rolls are as of July 2022.[37]

Hokitika has one sister city.

The events of The Luminaries, by Eleanor Catton, take place within Hokitika. The book won the Man Booker Prize in 2013.

The novel Hokitika Town, by Charlotte Randall, is set in Hokitika.

The 2004 historical novel The Colour by Rose Tremain is partially set in 1860s Hokitika.