Ingria is a historical region in what is now northwestern European Russia. It lies along the southeastern shore of the Gulf of Finland, bordered by Lake Ladoga on the Karelian Isthmus in the north and by the River Narva on the border with Estonia in the west. The earliest known indigenous people of the region are the now mostly Orthodox Izhorians and Votians, as well as the Ingrian Finns who descend from the Lutheran Finnish immigrants who settled in the area in the 17th century, when Finland proper and Ingria were both parts of the Swedish Empire.

Ingria as a whole never formed a separate state, however North Ingria was an independent state for just under two years in 1919–1920. The Ingrians, understood as the inhabitants of Ingria regardless of ethnicity, can hardly be said to have been a nation, although the Soviet Union recognized their "nationality"; as an ethnic group, the Ingrians proper, Izhorians, are close to extinction together with their language. This notwithstanding, many people still recognize their Ingrian heritage.[1] 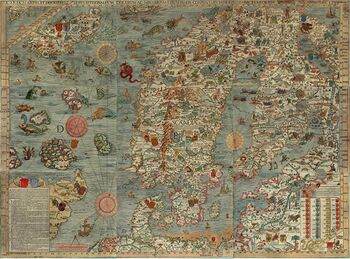 In the Viking era (late Iron Age), from the 750s onwards, Ladoga served as a bridgehead on the Varangian trade route to Eastern Europe. A Varangian aristocracy developed that would ultimately rule over Novgorod and Kievan Rus'. In the 860s, the warring Finnic and Slavic tribes rebelled under Vadim the Bold, but later asked the Varangians under Rurik to return and to put an end to the recurring conflicts between them.[2]

The Swedes referred to the ancient Novgorodian land of Vod as "Ingermanland", Latinized to "Ingria". Folk etymology traces its name to Ingegerd Olofsdotter, the daughter of the Swedish king Olof Skötkonung (995–1022). Upon her marriage to Yaroslav I the Wise, Grand Prince of Novgorod and Kiev, in 1019, she received the lands around Ladoga as a marriage gift. They were administered by Swedish jarls, such as Ragnvald Ulfsson, under the sovereignty of the Novgorod Republic.

In the 12th century, Western Ingria was absorbed by the Republic. There followed centuries of frequent wars, chiefly between Novgorod and Sweden, and occasionally involving Denmark and Teutonic Knights as well. The Teutonic Knights established a stronghold in the town of Narva, followed by the Russian castle Ivangorod on the opposite side of the Narva River in 1492.

With the consolidation of the Kievan Rus and the expansion of the Republic of Novgorod north, the indigenous Ingrians became Eastern Orthodox. Ingria became a province of Sweden in the Treaty of Stolbovo in 1617 that ended the Ingrian War, fought between Sweden and Russia. After the Swedish conquest of the area in 1617 the Ingrian Finns, descendants of 17th-century Lutheran emigrants from present-day Finland , became the majority in Ingria. In 1710, following a Russian conquest, Ingria was designated as the Province of St. Petersburg.

In the Treaty of Nystad in 1721, Sweden formally ceded Ingria to Russia.

In 1927 the Soviet authorities designated the area as Leningrad Province. Deportations of the Ingrian Finns started in late 1920s, and Russification was nearly complete by the 1940s.

In the modern era, Ingria forms the northwestern anchor of Russia—its "window" on the Baltic Sea—with Saint Petersburg as its centre.

Although Sweden and Novgorod had fought for the Ingrian lands more or less since the Great Schism of 1054, the first actual attempt to establish Swedish dominion in Ingria appears to date from the early 14th century, when Sweden first founded the settlement of Viborg in Karelia[3] and then the fortress Landskrona (built in 1299 or 1300) at the confluence of the Ohta and Neva rivers. However, Novgorod re-conquered Landskrona in 1301 and destroyed it. Ingria eventually became a Swedish dominion in the 1580s, but the Treaty of Teusina (1595) returned it to Russia in 1595. Russia in its turn ceded Ingria to Sweden in the Treaty of Stolbova (1617) after the Ingrian War of 1610–1617. Sweden's interest in the territory was mainly strategic: the area served as a buffer zone against Russian attacks on the Karelian Isthmus and on present-day Finland, then the eastern half of the Swedish realm; and Russian Baltic trade had to pass through Swedish territory. The townships of Ivangorod, Jama (now Kingisepp), Caporie (now Koporye) and Nöteborg (now Shlisselburg) became the centres of the four Ingrian counties (slottslän), and consisted of citadels, in the vicinity of which were small boroughs called hakelverk – before the wars of the 1650s mainly inhabited by Russian townspeople. The degree to which Ingria became the destination for Swedish deportees has often been exaggerated.

Ingria remained sparsely populated. In 1664 the total population amounted to 15,000. Swedish attempts to introduce Lutheranism, which accelerated after an initial period of relative religious tolerance,[4] met with repugnance on the part of the majority of the Orthodox peasantry, who were obliged to attend Lutheran services; converts were promised grants and tax reductions, but Lutheran gains were mostly due to voluntary resettlements by Finns from Savonia and Finnish Karelia (mostly from Äyräpää).[1][5] The proportion of Lutheran Finns in Ingria (Ingrian Finns) comprised 41.1% in 1656, 53.2% in 1661, 55.2% in 1666, 56.9% in 1671 and 73.8% in 1695, the remainder being Russians,[5] Izhorians and Votes.[6] Ingermanland was to a considerable extent enfiefed to noble military and state officials, who brought their own Lutheran servants and workmen. However, a small number of Russian Orthodox churches remained in use until the very end of the Swedish dominion, and the forceful conversion of ethnic Russian Orthodox forbidden by law.[7] 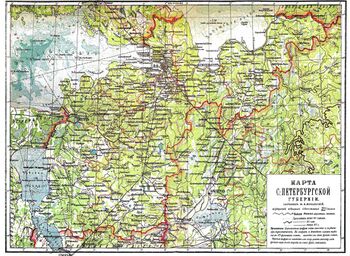 Map of Saint Petersburg Governorate in 1900

In the early 18th century the area was reconquered by Russia in the Great Northern War after having been in Swedish possession for about 100 years. Near the location of the Swedish town Nyen, close to the Neva river's estuary at the Gulf of Finland, the new Russian capital Saint Petersburg was founded in 1703.

In 1870, printing started of the first Finnish-language newspaper in Ingria, Pietarin Sanomat. Before that Ingria received newspapers mostly from Viborg. The first public library was opened in 1850 in Tyrö. The largest of the libraries, situated in Skuoritsa, had more than 2,000 volumes in the second half of the 19th century. In 1899 the first song festival in Ingria was held in Puutosti (Skuoritsa).[1]

Under the Russian-Estonian Peace Treaty of Tartu of 1920, a small part of West Ingria became part of the Republic of Estonia. In contrast to other parts of Ingria, Finnish culture blossomed in this area. This was to a large extent due to the work of Leander Reijo (also Reijonen or Reiju) from Kullankylä on the new border between Estonia and the Soviet Union, who was called "The King of Ingria" by the Finnish press. Finnish schools and a Finnish newspaper were started. A church was built in Kallivieri in 1920 and by 1928 the parish had 1,300 people.[8][9]

In 1945, after the Second World War, Estonian Ingria, then in the Soviet Union, became part of the Russian SFSR. Since Estonia reclaimed its independence in 1991, this territory has been disputed. As Russia does not recognize the Peace Treaty of Tartu, the area currently remains under Russian control. 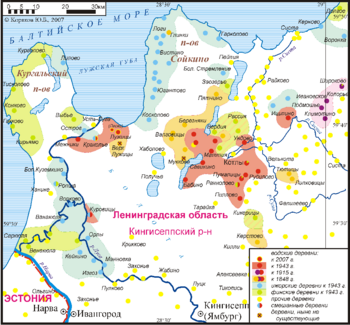 Finnic settlements in Western Ingria throughout the 20th century

After the 1917 Bolshevik revolution in Russia, the Republic of North Ingria (Pohjois Inkeri) declared its independence from Russia with the support of Finland and with the aim of incorporation into Finland. It ruled parts of Ingria from 1919 until 1920. With the Russian-Finnish Peace Treaty of Tartu it was re-integrated into Russia, but enjoyed a certain degree of autonomy.

The First All-Union Census of the Soviet Union in 1926 recorded 114,831 Leningrad Finns, as Ingrian Finns were called.[1] The 1926 census also showed that the Russian population of central Ingria outnumbered the Finnic peoples living there, but Ingrian Finns formed the majority in the districts along the Finnish border.[5]

In the early 1930s the Izhorian language was taught in the schools of the Soikinsky Peninsula and the area around the mouth of the Luga River.[1]

In 1928 collectivization of agriculture started in Ingria. To facilitate it, in 1929–1931, 18,000 people (4320 families), kulaks (independent peasants) from North Ingria, were deported to East Karelia, the Kola Peninsula as well as Kazakhstan and Central Asia.

The situation for the Ingrian Finns deteriorated further when in the fall of 1934 the Forbidden Border Zone along the western border of the Soviet Union was established, where entrance was forbidden without special permission issued by the NKVD. It was officially only 7.5 km deep initially, but along the Estonian border it extended to as much as 90 km. The zone was to be free of Finnic and some other peoples, who were considered politically unreliable.[5][11] On 25 March 1935, Genrikh Yagoda authorized a large-scale deportation targeting Estonian, Latvian and Finnish kulaks and lishentsy residing in the border regions near Leningrad. About 7,000 people (2,000 families) were deported from Ingria to Kazakhstan, Central Asia and the Ural region. In May and June 1936 the entire Finnish population of the parishes of Valkeasaari, Lempaala, Vuole and Miikkulainen near the Finnish border, 20,000 people, were resettled to the areas around Cherepovets and Siberia in the next wave of deportations. In Ingria they were replaced with people from other parts of the Soviet Union, mostly Russians but also Ukrainians and Tatars.[1][5]

Both Ingrian Finnish and Izhorian populations all but disappeared from Ingria during the Soviet period. 63,000 fled to Finland during World War II, and were required back by Joseph Stalin after the war. Most became victims of Soviet population transfers and many were executed as "enemies of the people".[1][5][11] The remainder, including some post-Stalin returnees (it was not until 1956 that some of the deported were allowed to return to their villages), were outnumbered by Russian immigration.

After the dissolution of the Soviet Union in 1991, surviving Ingrian Finns and their Russified descendants have been allowed to emigrate to Finland. This has led to the birth of a sizable Russophone minority in Finland.