Nukuʻalofa is the capital and largest city of Tonga. It is located on the north coast of the island of Tongatapu, in the country's southernmost island group.

On 10 June 1777, British captain James Cook wrote of his arrival at their anchorage place. His description of the place confirmed, with his map, that this was the bay of Nukuʻalofa.

At length, about two in the afternoon, we arrived at our intended station. It was a very snug place, formed by the shore of Tongataboo on the South East, and two small islands on the East and North East. Here we anchored in ten fathoms water, over a bottom of oozy sand; distant from the shore one-third of a mile [500 m].[1]

Cook never used the name Nukualofa or any other spelling for the reports of this voyage, but he mentioned the island of Pangaimodoo (Pangaimotu) which was to the east of his anchorage position. Captain Cook also wrote that he travelled by canoes to visit Mooa (Muʻa) where Paulaho and other great men lived. The house that Paulaho provided was on the beach 500 metres (1⁄3 mi) from the ship. Reference to his map shows that he must have landed and stayed in the Siesia area, the eastern part of modern Nukuʻalofa. Cook also drafted the first map of the bay of Nukuʻalofa. 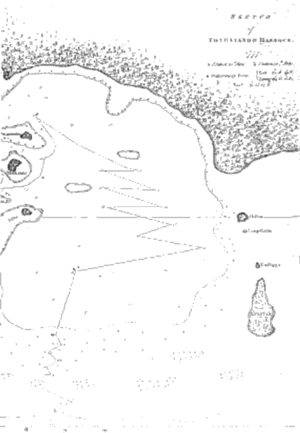 The first recorded Map of Tongataboo Harbour as sketched by Captain Cook in 1777. The map clearly shows the Bay of Nukuʻalofa and his anchored position near Pangaimotu. Small islands of Nukuʻalofa were named with phonetic spelling, including Atata, Pangaimotu, Makahaʻa, and Fetoa.

The first written record for Nukuʻalofa is stated in the first dedicated book for Tonga by George Vason which was published in 1810. George Vason was an English missionary from the London Missionary Society, who arrived in Tonga in 1797. George Vason wrote of their arrival that:

"Before we could well come to an anchor, the ship was surrounded by the natives, who flocked to us from every adjacent Island. The place, before which we anchored, was called Noogollefa: it was near an Island, named Bonghy-moddoo; on which former navigators pitched their tents, as a convenient spot, on account of its separation from the main Island, to preserve themselves from being too much incommoded by the natives."[2]

That was the first mention of Nukuʻalofa, spelled as Noogoollefa. Vason's unusual spelling of Nukuʻalofa and Pangaimotu (as "Bonghy-Moddoo") was because the standard Tongan alphabet would not be developed until 1826–27.

The second oldest book dedicated to Tonga was by William Mariner, adopted son of Fīnau ʻUlukālala, which was published in 1817. Mariner described his experiences during the years he was the adopted son of ʻUlukālala (1806–1810). He described the civil war and the siege of the Fort of Nukuʻalofa, which fell to ʻUlukālala and his warriors.

The third attempt of Christian missionaries was recorded in April 1826, when two Tahitian London Missionaries were detained by Tupou the chief of Nukuʻalofa.

In March 1826, the four men left Tahiti in the Minerva, their destination Fiji. But at Nukuʻalofa, Tonga, their plans were disrupted by the high chief Tupou (Aleamotuʻa). From Davies' perspective the Tahitian were placed under detention at Tongatapu: “The chief called Tupou would not let them proceed. He had been himself a resident in Lageba and calls himself the friend of Tuineau, the chief of Lageba and as such he took possession of the present intended for the Fijian chief".[3]

The arrival of the Methodist missionaries in Nukuʻalofa in 1827 reinforced the Christian faith. The persecution suffered by Christians in Hihifo and Hahake forced a lot of people to seek refuge in Nukuʻalofa. As a result of the encouragement of Tupou, the King of Nukuʻalofa, this was the beginning of the expanding of Nukuʻalofa to become the major center of Christianity in Tonga.

The US Exploring Expedition met with King Josiah (Aleamotuʻa) in 1840.[4]

The final phase of the arrival of Christianity in Tonga was the arrival of Father Chevron, or Patele Sevelo, in 1842. He wrote that he arrived in Nukuʻalofa in 1842 and met the Tuʻi Kanokupolu Aleamotuʻa who was baptised by the Wesleyan as Sosaia.

In conclusion, these landings turned Nukuʻalofa from a small village and fort into the center of Tonga during the introduction of Christianity. From the earliest records for Nukuʻalofa, early writers always referred to the settlement as Noogollefa (1797), Nioocalofa (1806), Nukualofa (1826 by Methodist) and Noukou-Alofa (1842 by French Catholic priests). There was no other mention of any other name of the settlement other than the settlement or fort of Nukuʻalofa.

Capital of the Kingdom of Tonga (1875 and later) 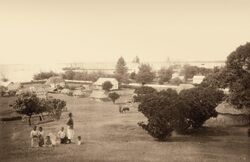 Since Nukuʻalofa has been expanding from when it became the center of Christianity in Tonga in the 19th century, it became essential that it was reorganised for effective administration of the capital. The reorganisation of Nukuʻalofa divided up Nukuʻalofa into three major district areas: 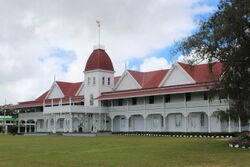 The capital city was struck by the tsunami caused by the 2022 Hunga Tonga–Hunga Ha'apai eruption.[5] There is reportedly significant damage to the capital.[6] The damage might take years to repair.[7] 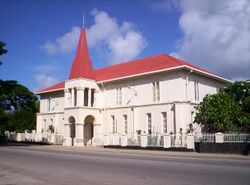 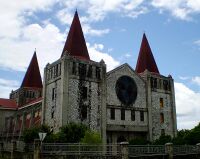 The Free Church of Tonga

The national government is based in Nukuʻalofa. The parliament of Tonga meets there, and the Royal Palace is located near the city.

The name is said to have originated when Moʻungatonga, the 6th Tuʻi Haʻatakalaua (King who governs the daily business of Tonga on behalf of the Tuʻi Tonga or Sacred King of Tonga) sent his youngest son, Ngata (later to be 1st Tuʻi Kanokupolu) as governor to Hihifo (Western side of Tongatapu). It was a difficult decision for Ngata as the Tuʻi Tonga and Tuʻi Haʻatakalaua have been unable to control Hihifo. Ngata had many reasons to fear for his life as his predecessors had been killed by the chiefs and people of Hihifo.

Between 12 and 13 February 2018, the Tongan Parliament House was destroyed by Cyclone Gita, a category 4 cyclone that hit the nation.[8] As a result, the Parliament was moved to the Tongan National Centre, 4 km (2.5 mi) south of the city centre, and that parcel of land gazetted as a part of Nukuʻalofa.

Nukuʻalofa features a tropical rainforest climate (Af) under the Köppen climate classification. The area does experience noticeably wetter and drier periods during the year, but it does not have a true dry season month where monthly precipitation falls below 60 millimetres (2.4 in). Temperatures are slightly warmer during January and February where average temperatures hover around 25 °C (77 °F) than June and July where the average temperatures is roughly 21 °C (70 °F). Nukuʻalofa sees a little more than 1,700 millimetres (67 in) of precipitation annually. As the trade winds are almost permanent and cyclones are not rare in Nukuʻalofa, the climate is not equatorial but maritime trade-wind tropical climate.[9] 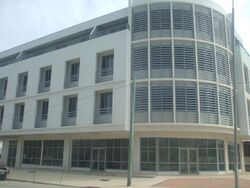 A hotel in Nuku'alofa

Nukuʻalofa is the economic hub of the country.

The city has a number of tourist hotels.

Nukuʻalofa is the central hub for transport in Tonga.

Buses arrive and depart from the central bus station along Vuna Road close to the centre of town. Bus services are privately operated, and their drivers are free to set their own schedules. Fares are fixed by the government, with reduced rates for school children. The buses are usually filled to capacity. In addition, some schools and large hotels provide their own buses.

There are numerous taxis, also privately owned. Many people who own a car earn extra money by providing taxi services in their spare time. Taxi fares are also set by the government. Most families have their own car; few residents ride bicycles. There are no operational railways or trams in Tonga, although there was once a narrow-gauge railway from the lagoon to the wharf, which gave its name to Railway Road.[17]

Nukuʻalofa harbour is the only deep-water harbour of the island, which determined its selection as the site for the capital. For many years Vuna Wharf was the international harbour until it was destroyed by an earthquake in 1977. A new, much larger wharf was built towards Maʻufanga, named after Queen Sālote. Between these two wharves is the wharf numbered '42', used by fishermen and inter-island ferries. It is the central hub for boats to the outer islands. There are usually two boats to ʻEua each day and two to Haʻapai and Vavaʻu each week. In addition to these regular services by shipping companies, private boat owners provide less regular services to smaller islands such as Nomuka and ʻEueiki.

Air transport is provided by Fuaʻamotu International Airport on the south side of Tongatapu, 35 kilometres (22 mi) from Nukuʻalofa.

In January 2015, a new island of about 1 km (0.6 mi) diameter was reported to have been created by a volcanic eruption of Hunga Tonga–Hunga Ha'apai. The newly formed island is situated about 65 kilometers (40 miles) northwest of the capital city.[18][19]

Nukuʻalofa is twinned with:[20]