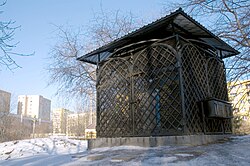 Ohel (Hebrew: אוהל‎; plural: ohelim, literally, "tent")[1][2] is a structure built around a Jewish grave as a sign of prominence of the deceased. Ohelim cover the graves of some (but not all) Hasidic Rebbes, important rabbis, tzadikim, prominent Jewish community leaders, and biblical figures. Typically a small masonry building, an ohel may include room for visitors to pray, meditate, and light candles in honor of the deceased.

According to Krajewska, the tradition of covering a grave with an ohel may be based on the Cave of the Patriarchs, in which Abraham buried Sarah.[2] Nolan Menachemson suggests that the Hasidic tradition of covering the graves of Rebbes with an ohel derives from the Ohel Moed ("Tent of Meeting") in which Moses communicated with God during the Israelites' travels in the desert.[3]

Ohelim are usually simple masonry structures. They may include one or two windows.[2] In prewar Poland, the ohel of a Rebbe was located close by the Hasidic court, and was big enough to accommodate a minyan of ten men beside the grave.[4]

The ohel of the Lubavitcher Rebbes in Queens, New York, is unusual in that it does not have a roof. This allows kohanim to visit the graves without coming into contact with impurity from the dead.[5]

In the case of a Hasidic Rebbe, the ohel is a place for visitors to pray, meditate, write kvitelach (petitionary prayer notes), and light candles in honor of the deceased.[6][7][8] Ohelim of Hasidic Rebbes, as well as the tombs of tzadikim venerated by Moroccan Jews, serve as year-round pilgrimage sites, with the biggest influx of visitors coming on the Rebbe's or tzadik's Yom Hillula (anniversary of death).[9][10]

One or more graves may be included in the same ohel. Notable ohelim include:

Biblical figures and Mishnaic and Talmudic sages are typically buried in ohelim: