Papeʻete (Tahitian: Papeʻete) pronounced Template:IPA-poly)[3] is the capital city of French Polynesia, an overseas collectivity of the France in the Pacific Ocean. The commune of Papeʻete is located on the island of Tahiti, in the administrative subdivision of the Windward Islands, of which Papeʻete is the administrative capital.[4] The French High Commissioner also resides in Papeʻete.[5]

It is the primary center of Tahitian and French Polynesian public and private governmental, commercial, industrial and financial services, the hub of French Polynesian tourism and a commonly used port of call.[5] The Windward Islands are themselves part of the Society Islands. The name Papeʻete, sometimes also spelled Papeete in languages other than Tahitian,[Note 1] means "water from a basket".[6] The urban area of Papeʻete had a total population of 136,771 inhabitants at the August 2017 census, 26,926 of whom lived in the commune of Papeʻete proper.[2] 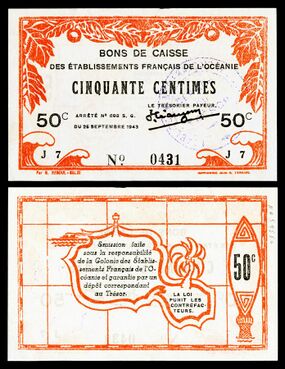 The commune of Papeʻete is subdivided into eleven quartiers (wards):[7][8][9]

Papeʻete features a tropical monsoon climate (Am according to the Köppen climate classification) with a wet season and dry season, bordering a tropical rainforest climate, with high temperatures and humidity year round. However, precipitation is observed even during the city's dry season. The dry season is short, covering only the months of August and September. The rest of the year is wet, with the heaviest precipitation falling in the months of December and January. Sunshine is moderately high, as most precipitation comes as thunderstorms and cyclones, and doesn't last for long. 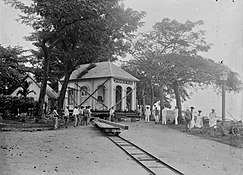 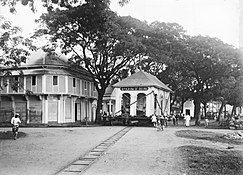 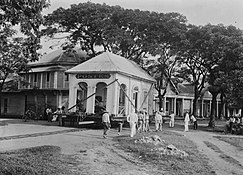 Relocation of the post office using a Decauville railway in 1902

In 1902, it became necessary to move the post office of Papeʻete to another location. Instead of demolishing it and rebuilding it at the new site, it was lifted from the subsoil and moved as a whole on a Decauville railway.

Previously, during the construction of the Faʻaiere water tower with a capacity of 150,000 litres for the drinking water supply of the city of Papeʻete, a difference in altitude of 37 metres (121 ft) was overcome with a light railway laid on a 220 metres (720 ft) long inclined plane. A winch driven by a 12-horsepower Fowler or Decauville locomobile carried three narrow gauge railway trucks at a time, consuming up to 200 kilograms (440 lb) of coal per day for about sixty journeys.[12] Paul Decauville mentioned in a letter to Governor Theodore Lacascade, dated 18 June 1891, an order for "15 kilometres (9.3 mi) of 600 mm (1 ft 11 5⁄8 in) portable rail tracks and about 12,000 francs of rolling stock, payable in three years," presumably for a tramway from Papeʻete to Punaʻauia operated by hand or animals.[13][14] 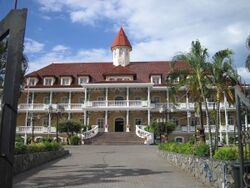 Papeʻete Town Hall, a replica of the Royal Palace of Papeʻete razed in the 1960s

At the outbreak of World War I Papeʻete was shelled by German vessels, causing loss of life and significant damage.

The growth of the city was boosted by the decision to move the French nuclear weapon test range from Algeria, which had become independent, to the atolls of Moruroa and Fangataufa, some 1,500 km (930 mi) to the east of Tahiti. This was motivated, in particular, by the construction of the Faʻaʻā International Airport, the only international airport in French Polynesia, near Papeʻete. In 1983, The Church of Jesus Christ of Latter-day Saints built the Papeʻete Tahiti Temple here because of its large number of members in the region. On 5 September 1995 the government of Jacques Chirac conducted the first of a series of nuclear test detonations off the shores of Moruroa. A resulting riot in Papeʻete lasted for two days and damaged the international airport, injured 40 people, and scared away tourism for some time.[15][16] Similar rioting had occurred after another French nuclear test in the same area in 1987.

The streets of the town center are very busy, and traffic can be a problem since they are very narrow. The Tahiti freeway starts close to the town center as Pōmare Boulevard, named after the Tahitian Royal Family of the 19th century. By air, passengers depart from the Faʻaʻā International Airport. Domestic interisland service is operated by Air Tahiti with international flights being operated by Air Tahiti Nui, Air France, LATAM Chile, United and other airlines. By sea, passengers can use a marine ferry service for travel to Moorea or a Bora Bora cruise line service for travel to Bora Bora.

Traveling tourists arrive and depart Papeʻete via cruise ship at Papeʻete Harbor or domestic airline at Faʻaʻā International Airport, which was completed and opened in 1962. 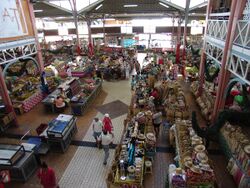 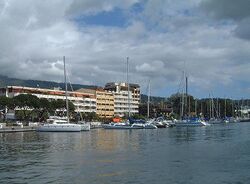 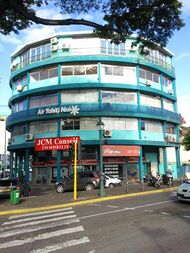 Air Tahiti Nui has its head office in the Immeuble Dexter in Papeʻete.[26]

The Lycée Paul-Gauguin is located in the city.