The Pazyryk[lower-alpha 1] burials are a number of Scythian (Saka)[2][3][4] Iron Age tombs found in the Pazyryk Valley and the Ukok plateau in the Altai Mountains, Siberia, south of the modern city of Novosibirsk, Russia ; the site is close to the borders with China , Kazakhstan and Mongolia.[5] 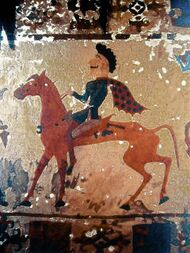 Numerous comparable burials have been found in neighbouring western Mongolia.

The tombs are Scythian-type kurgans, barrow-like tomb mounds containing wooden chambers covered over by large cairns of boulders and stones, dated to the 4th–3rd centuries BCE.[6] The spectacular burials at Pazyryk are responsible for the introduction of the term kurgan, a Russian word, into general usage to describe these tombs. The region of the Pazyryk kurgans is considered the type site of the wider Pazyryk culture. The site is included in the Golden Mountains of Altai UNESCO World Heritage Site.[7]

The bearers of the Pazyryk culture were horse-riding pastoral nomads of the steppe, and some may have accumulated great wealth through horse trading with merchants in Persia, India and China .[8] This wealth is evident in the wide array of finds from the Pazyryk tombs, which include many rare examples of organic objects such as felt hangings, Chinese silk, the earliest known pile carpet, horses decked out in elaborate trappings, and wooden furniture and other household goods. These finds were preserved when water seeped into the tombs in antiquity and froze, encasing the burial goods in ice, which remained frozen in the permafrost until the time of their excavation.

Because of a freak climatic freeze, some of the Altai-Sayan burials, notably those of the 5th century BCE at Pazyryk and neighbouring sites, such as Katanda, Shibe, and Tuekt, were isolated from external climatic variations by a protective layer of ice that conserved the organic substances buried in them. Certain geometric designs and sun symbols, such as the circle and rosette, recur at Pazyryk but are completely outnumbered by animal motifs. Such specifically Scythian features as zoomorphic junctures, i.e. the addition of a part of one animal to the body of another, are rarer in the Altaic region than in southern Russia. The stag and its relatives, however, figure as prominently in Altai-Sayan as in Scythian art.[9]

"At Pazyryk too are found bearded mascarons (masks) of well-defined Greco-Roman origin, which were doubtless inspired by the Hellenistic kingdoms of the Cimmerian Bosporus."[10] 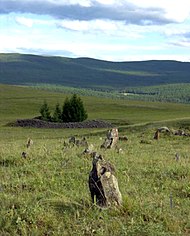 The first tomb at Pazyryk, barrow 1, was excavated by the archaeologist M. P. Gryaznov in 1929; barrows 2–5 were excavated by Sergei Ivanovich Rudenko in 1947–1949.[11] While many of the tombs had already been looted in earlier times, the excavators unearthed buried horses, and with them immaculately preserved cloth saddles, felt and woven rugs including the world's oldest pile carpet,[12][13] a 3-metre-high four-wheel funeral chariot from the 5th century BCE and other splendid objects that had escaped the ravages of time.[14] These finds are now exhibited at the Hermitage Museum in Saint Petersburg. 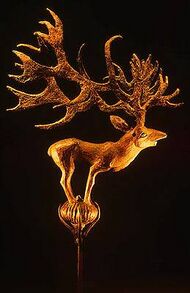 A gilded wooden figurine of a deer from the Pazyryk burials, 5th century BCE

Cranial measurements from the Pazyryk burials performed in the 1960s suggested that the interred were largely of European ancestry with some admixture of Northeast Asian ancestry.[15]

Rudenko's most striking discovery was the body of a tattooed Pazyryk chief: a thick-set, powerfully built man who had died when he was about 50. Parts of the body had deteriorated, but much of the tattooing was still clearly visible (see image). Subsequent investigation using reflected infrared photography revealed that all five bodies discovered in the Pazyryk kurgans were tattooed.[16] No instruments specifically designed for tattooing were found, but the Pazyryks had extremely fine needles with which they did miniature embroidery, and these were probably used for tattooing.

The chief was elaborately decorated with an interlocking series of striking designs representing a variety of fantastic beasts. The best preserved tattoos were images of a donkey, a mountain ram, two highly stylized deer with long antlers and an imaginary carnivore on the right arm. Two monsters resembling griffins decorate the chest, and on the left arm are three partially obliterated images which seem to represent two deer and a mountain goat. On the front of the right leg a fish extends from the foot to the knee. A monster crawls over the right foot, and on the inside of the shin is a series of four running rams which touch each other to form a single design. The left leg also bears tattoos, but these designs could not be clearly distinguished. In addition, the chief's back is tattooed with a series of small circles in line with the vertebral column. This tattooing was probably done for therapeutic reasons. Contemporary Siberian tribesmen still practice tattooing of this kind to relieve back pain. 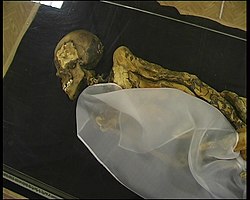 The most famous undisturbed Pazyryk burial so far recovered is the Ice Maiden or "Altai Lady" found by archaeologist Natalia Polosmak in 1993 at Ukok, near the Chinese border. The find was a rare example of a single woman given a full ceremonial burial in a wooden chamber tomb in the fifth century BCE, accompanied by six horses.[5] She had been buried over 2,400 years ago in a casket fashioned from the hollowed-out trunk of a Siberian larch tree. On the outside of the casket were stylized images of deer and snow leopards carved in leather. Shortly after burial the grave had apparently been flooded by freezing rain, and the entire contents of the burial chamber had remained frozen in permafrost. Six horses wearing elaborate harnesses had been sacrificed and lay to the north of the chamber.[17] The maiden's well-preserved body, carefully embalmed with peat and bark, was arranged to lie on her side as if asleep. She was young, and her hair had been shaved off but she was wearing a wig and tall hat; she had been 167 centimetres (5 ft 6 in) tall. Even the animal style tattoos were preserved on her pale skin: creatures with horns that develop into flowered forms. Her coffin was made large enough to accommodate the high felt headdress she was wearing, which was decorated with swans and gold-covered carved cats.[18] She was clad in a long crimson and white striped woolen skirt and white felt stockings. Her yellow blouse was originally thought to be made of wild "tussah" silk but closer examination of the fibers indicate the material is not Chinese but was a wild silk which came from somewhere else, perhaps India .[8] Near her coffin was a vessel made of yak horn, and dishes containing gifts of coriander seeds: all of which suggest that the Pazyryk trade routes stretched across vast areas of Iran. Similar dishes in other tombs were thought to have held Cannabis sativa, confirming a practice described by Herodotus[5] but after tests the mixture was found to be coriander seeds, probably used to disguise the smell of the body.

Two years after the discovery of the "Ice Maiden" Dr. Polosmak's husband, Vyacheslav Molodin, found a frozen man, elaborately tattooed with an elk, with two long braids that reached to his waist, buried with his weapons.

Dr Anicua also noted that her blouse was a bit stained, indicating that the material was not a new garment, made for the burial. 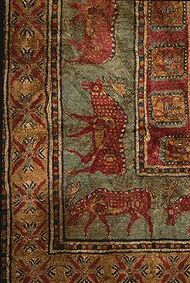 One of the most famous finds at Pazyryk is the Pazyryk carpet, which is probably the oldest surviving pile carpet in the world. According to some sources, it may have been manufactured in Ancient Armenia, using the Armenian double knot and Armenian cochineal for the red color.[19][20] According to another source, it is an imported Persian work because of its decoration.[21] It measures 183 cm × 200 cm (6 ft 0 in × 6 ft 7 in) and has a knot density of approximately 360,000 knots per square meter, which is higher than most modern carpets. The middle of the carpet consists of a ribbon motif, while in the border there is a procession with elk or deer, and in another border warriors on horses. When it was found it had been deeply frozen in a block of ice, which is why it is so well-preserved. The carpet can be seen at the Hermitage Museum in Saint Petersburg, Russia.[22]

In a corner of one grave chamber of the Pazyryk cemetery was a fur bag containing cannabis seed, a censer filled with stones, and the hexapod frame of an inhalation tent – these are believed to have been utilized at the end of the funerary ritual for purification.

Other undisturbed kurgans have been found to contain remarkably well-preserved remains, comparable to the earlier Tarim mummies of Xinjiang. Bodies were preserved using mummification techniques and were also naturally frozen in solid ice from water seeping into the tombs. They were encased in coffins made from hollowed trunks of larch (which may have had sacral significance) and sometimes accompanied by sacrificed concubines and horses. The clustering of tombs in a single area implies that it had particular ritual significance for these people, who were likely to have been willing to transport their deceased leaders great distances for burial.

As recently as the summer of 2012, tombs have been discovered at various locations. In January 2007 a timber tomb of a blond chieftain warrior was unearthed in the permafrost of the Altai mountains region close to the Mongolian border.[23] The body of the presumed Pazyryk chieftain is tattooed; his sable coat is well preserved, as are some other objects, including what looks like scissors. A local archaeologist, Aleksei Tishkin, complained that the indigenous population of the region strongly disapproves of archaeological digs, prompting the scientists to move their activities across the border to Mongolia.[24]

Rudenko initially assigned the neutral label Pazyryk culture for these nomads and dated them to the 5th century BCE; the dating has been revised for barrows 1-5 at Pazyryk, which are now considered to date to the 4th–3rd centuries BCE.[25] The Pazyryk culture has since been connected to the Scythians whose similar tombs have been found across the steppes. The Siberian animal style tattooing is characteristic of the Scythians. The artifacts show that these ancient Altai nomads had cultural and trading links to Central Asia, China and the Near East.[26] There is evidence that Pazyryk trade routes were vast and connected with large areas of Asia including India , perhaps Pazyryk merchants largely trading in high quality horses.[5]