Port Moresby (/ˈmɔːrzbi/; Tok Pisin: Pot Mosbi), also referred to as Pom City or simply Moresby, is the capital and largest city of Papua New Guinea. It is one of the largest cities in the southwestern Pacific (along with Jayapura) outside of Australia and New Zealand. It is located on the shores of the Gulf of Papua, on the south-western coast of the Papuan Peninsula of the island of New Guinea. The city emerged as a trade centre in the second half of the 19th century. During World War II, it was a prime objective for conquest by the Imperial Japanese forces during 1942–43 as a staging point and air base to cut off Australia from Southeast Asia and the Americas.

In the 2011 census, Port Moresby had 364,145 inhabitants. An unofficial 2020 estimate gives the population as 383,000.[2] The place where the city was founded has been inhabited by the Motu-Koitabu people for centuries. The first Briton to see it was Royal Navy Captain John Moresby in 1873. It was named in honour of his father, Admiral of the Fleet Sir Fairfax Moresby.

Although Port Moresby is surrounded by Central Province, of which it is also the capital, it is not part of that province but forms the National Capital District. The traditional landowners, the Motu and Koitabu people, are represented by the Motu Koita Assembly.

Port Moresby hosted the APEC summit in November 2018.[3] However, there were concerns about security given the capital's reputation for violent crime.[3] 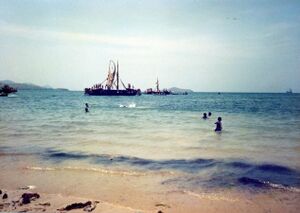 A Hiri expedition arriving in Port Moresby in the 1990s 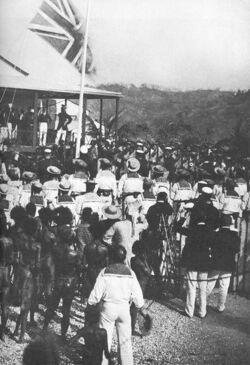 Queensland raises the British flag at Port Moresby in 1883 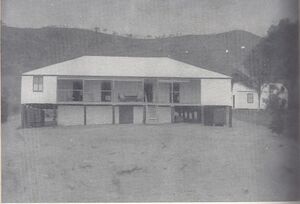 Government House in Port Moresby—still used today though substantially enlarged and altered—, at the beginning of 20th century.

In 1883 Queensland attempted to annex the south-eastern corner of the New Guinea Island (subsequently known as Papua), fearing that Germany would take control of the entire eastern half of the island. British authorities refused to approve the annexation following the German annexation of New Guinea in 1884, but four years later it established a protectorate over Papua as British New Guinea.

In 1905 the recently federated Australian government passed the Papua Act which came into effect in 1906. The act transferred Papua, with Port Moresby as its capital, to direct Australian rule. From then until 1941 Port Moresby grew slowly. The main growth was on the peninsula, where port facilities and other services were gradually improved. The first butcher's shop and grocery opened in 1909,[4] electricity was introduced in 1925,[5] and piped water supply was provided in 1941.[6] 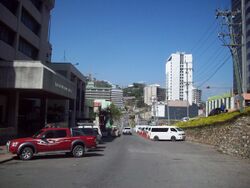 During World War II, some Papuan men enlisted in the Papua Infantry Battalion and others as carriers over trails and rough terrains (porters) as supply support to Allied and Japan ese armies during long jungle marches.[7] Historian William Manchester outlines in his biography of General Douglas MacArthur, American Caesar, that acting as porters was well down the natives' list of acceptable voluntary activities and that they would fade away without great inducements.[8] Many Papuan residents of Port Moresby either returned to their family villages or were evacuated to camps when the threat of Japanese invasion loomed. By September 1942, the city was an important Allied complex of bases, and thousands of troops were stationed in the area or more often, staged through it, as it was the last Allied bastion on the island[9][10] and, conversely, a key staging and jumping off point as the Allies began conducting offensive warfare themselves, pushing back the Japanese advances.[11] General MacArthur located his headquarters in Port Moresby from November 1942 to October 1944. 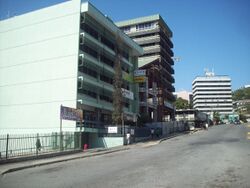 The longstanding downtown United Church with next door office building in 2013 were replaced with one building, the church on the ground floor. 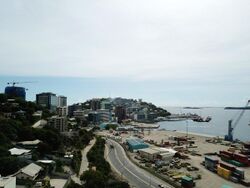 In 1945, the Territory of Papua and New Guinea was formed when Papua and the former German New Guinea, which had been administered by Australia since 1918, were amalgamated under a single Australian administration though several laws remained in two territories and remain so, which can be complicating with provinces sitting on two sides of the otherwise extinct boundary. Port Moresby became the capital of the new combined territory and a focal point for the expansion of public services. Port Moresby was granted city status in 1972, with Oala Oala-Rarua becoming the first Lord Mayor.[12]

In September 1975, Papua New Guinea became an independent country with Port Moresby as its capital city. Prince Charles, Prince of Wales, represented the Queen of Papua New Guinea at the celebrations.[13] New government, intellectual and cultural buildings were constructed in the suburb of Waigani to supplement and replace those of downtown Port Moresby. They included those for government departments, including a National Parliament Building, which was opened in 1984 by Prince Charles and blends traditional design with modern building technology.[13]

The Papua New Guinea National Museum and National Library are in Waigani. A mansion was built in Port Moresby just west of the old legislative building but the last pre-independence chief minister and first prime minister of the sovereign state declared it not nearly grand enough; it was made the residence of Australian high commissioners and a mansion suitable to Somare's demands was built in Waigani.

Several of the government buildings have been abandoned due to long-term neglect. Chief amongst these are Marea Haus (known to most locals as the "Pineapple Building") and the Central Government Offices. Nearby buildings, such as Morauta Haus and Vulupindi Haus, are starting to show significant signs of decay due to a lack of maintenance. However, widespread restoration rather than demolition of long-disused office buildings has been highly active since the first decade of the 21st century. The legislative building before independence and the first parliament building is long-gone but the old court house in town Port Moresby remains, bearing its pre-independence label with its previous title.

Moresby has a tropical savanna climate (Köppen: Aw) with relatively constant temperatures throughout the year. Port Moresby's average yearly rainfall is just over 1,000 millimetres or 39.37 inches, making it the driest place in New Guinea.

The wet season starts in December and ends in May; the dry season covers the remaining six months. This is due to the south easterly trade winds running parallel to the coast, and the city being surrounded by high mountains. The average high temperatures range from 28 to 32 °C (82.4 to 89.6 °F) depending on time of year, while the average low temperature shows very little seasonal variation, hovering around the 23 °C (73.4 °F) mark. It tends to be slightly cooler in the city during the dry season. Script error: No such module "weather box". 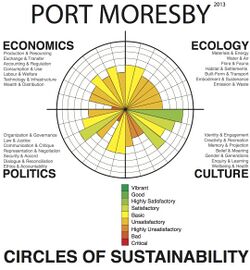 Urban sustainability analysis of the greater urban area of the city, using the Circles of Sustainability method of the UN Global Compact Cities Programme. 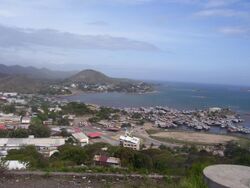 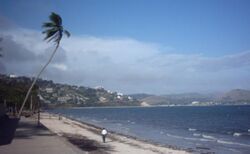 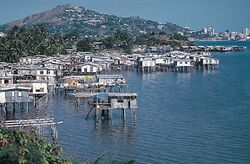 Port Moresby is the single district of the National Capital District, which contains three Local Level Government (LLG) areas. For census purposes, the LLG areas are subdivided into wards and those into census units.[18]

The National Capital District machinery of government also incorporates the Motu Koita Assembly, established by an act of parliament to represent the traditional landowners of Port Moresby, the Motu and Koitabu people. The Assembly governs the traditional lands and inhabitants of the ten recognised villages, and is the only entity of its kind in Papua New Guinea. The Chair of the Motu Koita Assembly also holds the position of Deputy Governor of the National Capital District.

Port Moresby refers to both the urbanised area of the National Capital District and more specifically to the main business area, known locally as "Town".

Since the 1990s the original town centre has ceased to have restaurants and night life, though it is very successful and prosperous-looking as an office centre. The affluent housing region north of downtown along and up from the coast remains so, though there are now few modest residential houses, most of which are replaced with substantial mansions and apartment buildings.

Al Jazeera describes Port Moresby as "one of the most dangerous cities in the world".[19] Parts of Port Moresby have security problems with house break-ins being the main problem. ABC Australia reports that "many homes have big fences covered in metal sheeting, locked gates and internal steel security doors."[20] Carjacking is now rife in the capital and stopping at the few functional traffic lights is not recommended after dark when marauding gangs gather at the intersections. Security guards are widely employed as the police force is underresourced and weakened by internal corruption. Travel by foot is not recommended in and about the city and suburbs due to continuing breakdown in law and order. The UN Global Compact Cities Programme, using a method called Circles of Sustainability, has assessed the urban security of Port Moresby as 'critical'.[21] 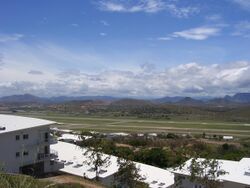 As the national highway system is not fully linked, there are many internal flights to other towns, such as Lae and Madang, which have no direct road connection to Port Moresby. 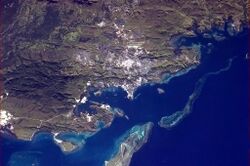 Papua New Guinea is rich in natural resources, which account for two thirds of their export earnings. Though PNG is filled with resources, the lack of development led foreign countries to take over some sites. Continuing foreign demand for PNG's resources led the United States to set up an oil company that began to export in 2004. This was the largest project in PNG's history. The project increased the potential to triple PNG's export revenue. Papua New Guinea gained much assistance from Australia and was offered two hundred million dollars a year in aid, and many countries such as Singapore, Japan and China have also played a great part in PNG's industry business.[22] The decision to host the 2018 APEC meeting,[23] bringing a large number of world leaders to Port Moresby, indicates the speed with which Port Moresby is entering the world economy.

There has been substantial building of housing, office towers, shopping malls and commercial establishments over much of the city. The waterfront area has been completely redeveloped with apartments, restaurants and shopping centres. Sporting facilities were upgraded significantly for the 2015 South Pacific Games, and further development took place in preparation for the 2016 FIFA Under-20 Women's World Cup.[24]

Air Niugini, the national airline of Papua New Guinea, and Airlines PNG, the second biggest airline in the country, have their head offices on the grounds of Jacksons International Airport.[25]

The 1991 South Pacific Games held from 7–21 September 1991 at Port Moresby and along Lae were the ninth South Pacific Games to be held. This was the first time that events at one games had been held in two cities. The decision to do so was to allow both locations to benefit from the construction of new facilities.[27]

Cricket PNG is the official governing body of the sport of cricket in Papua New Guinea. Its headquarters is in Port Moresby. Cricket PNG is Papua New Guinea's representative at the International Cricket Council and is an associate member and has been a member of that body since 1973. It is also a member of the East Asia-Pacific Cricket Council.[28][29]

The venue has hosted the PNG national side since 1975 and has previously hosted Rugby League World Cup matches in 1986 and 1990. It is also home of the Hunters, the local Papua New Guinea team who play in the Intrust Super Cup which is the Queensland NRL tournament. The National Football Stadium features a permanent main grandstand with seating for 3,000 including a roof and corporate facilities while temporary stands around the ground boost the seating capacity. There are also lights and a video screen.

Port Moresby is twinned with: